Black Pepper and Garlic as an Alternative Source for Insecticide

Garlic Bulbs has an amino acid that converts to a substance called allicin when crushed, blended or chopped that lets the Insect to move elsewhere.

Turn in your highest-quality paper
Get a qualified writer to help you with
“ Black Pepper and Garlic as an Alternative Source for Insecticide ”
Get high-quality paper
NEW! AI matching with writers

The characteristic odor released as a result of this process has powerful properties. However, the treatment is odourless to humans within minutes of application. Black Pepper is a spice that consist of dried berry of an Indian vine ground with the Black husk still on. Black Pepper is used in medication and it contains small amount of safrole, a mildly carcigenic compound.

Hal1: There is no significant difference between the Alternative Insecticide and Commercial Insecticide.

The Result of this study will serve as an information data for future use of Black Pepper (Piper Nigrum) and Garlic (Allium Sativum) in repelling insects in farming.

This study was limited in time in doing the study and also the financial. The researchers conducted this study at the Misamis Oriental General Comprehensive High School in Velez street, Cagayan de Oro, Misamis.

Insecticide: is a substance used to kill insects. They include ovicides and larvicides used against insect eggs and larvae, respectively. Insecticides are used in agricultude, medicine, industry and by consumers.

Black Pepper (Piper Nigrum): is a flowering vine in the family Piperaceae, cultivated for its fruit, which is usually dried and used as a spice and seasoning.

Garlic (Allium Sativum): is a species in the onion genus.Its close relatives include the onion, shallot, leek, chive and rakkyo. It is a bulbous plant. It grows up to 1.2 m (4 ft) in height. Its hardiness is USDA Zone 8. It produces hermaphrodite flowers.

Safrole: also known as shikimol, is a phenylpropene. It is a colorless or slightly yellow oily liquid typically extracted from the root-bark or the fruit of sassafras plants in the form of sassafras oil.

Black Pepper (Piper Nigrum) is native to South Asia and Southeast Asia and has been known to Indian cooking since at least 2 BCE. J. Innes Miller notes that while pepper was grown in southern Thailand and in Malaysia, its most important source was India, particularly the Malabar Coast, in what is now the state of Kerala Peppercorns were a much-prized trade good, often referred to as “black gold” and used as a form of commodity money. The legacy of this trade remains in some Western legal systems which recognize the term “peppercorn rent” as a form of a token payment made for something that is in fact being given.

Like many eastern spices, pepper was historically both a seasoning and a medicine. Long pepper, being stronger, was often the preferred medication, but both were used. Black Pepper (or perhaps long pepper) was believed to cure illness such as constipation, diarrhea, earache, gangrene, heart disease, hernia, hoarseness, indigestion, insect bites, insomnia, joint pain, liver problems, lung disease, oral abscesses, sunburn, tooth decay, and toothaches. It has been shown that piperine can dramatically increase absorption of selenium, vitamin B, beta-carotene and curcumin as well as other nutrients. As a medicine, pepper appears in the Buddhist Samaññaphala Sutta, chapter five, as one of the few medicines allowed to be carried by a monk. Pepper contains small amounts of safrole, a mildly carcinogenic compound. (Wikipedia 2011)

Black pepper has demonstrated impressive antioxidant and antibacterial effects–yet another way in which this wonderful seasoning promotes the health of the digestive tract. And not only does black pepper help you derive the most benefit from your food, the outer layer of the peppercorn stimulates the breakdown of fat cells, keeping you slim while giving you energy to burn. Black pepper is an excellent source of manganese and vitamin K, a very good source of copper and dietary fiber, and a good source of iron, chromium, and calcium. (whfoods July 28- Aug 3)

Safrole is regarded by the US Food and Drug Administration (FDA) to be a weak carcinogen in rats. However, according to a 1977 study of the metabolites of safrole in both rats and humans, two carcinogenic metabolites of safrole found in the urine of rats, 1′-hydroxysafrole and 3′-hydroxyisosafrole, were not found in human urine. The European Commission on Health and consumer protection assumes safrole to be genotoxic and carcinogenic. It occurs naturally in a variety of spices, such as cinnamon, nutmeg, and black pepper and herbs such as basil. In that role, safrole, like many naturally occurring compounds, may have a small but measurable ability to induce cancer in rodents. Despite this, the effects in humans were estimated by the Lawrence Berkeley National Laboratory to be similar to risks posed by breathing indoor air or drinking municipally supplied water.

In the United States, it was once widely used as a food additive in root beer, sassafras tea, and other common goods, but was banned by the FDA after its carcinogenicity in rats was discovered. Today, safrole is also banned for use in soap and perfumes by the International Fragrance Association. The root bark of American sassafras contains a low percentage of steam-volatile oil, which is typically 75% safrole. Attempts to refine safrole from sassafras bark in mass quantities are generally not economically viable due to low yield and high effort. However, smaller quantities can be extracted quite easily via steam distillation (about 20 – 25g of safrole from a kilogram of freshly peeled root bark).

Demand for safrole is causing rapid and illicit harvesting of the Cinnamomum parthenoxylon tree in Southeast Asia, in particular the Cardamom Mountains in Cambodia.[12] However, it is not clear what proportion of illicitly harvested safrole is going toward MDMA production, as over 90% of the global safrole supply (about 2000 metric tons per year) is used to manufacture pesticides, fragrances, and other chemicals. Sustainable harvesting of safrole is possible from leaves and stems of certain plants. (Wikipedia 2014)

Animal studies, and some early research studies in humans, have suggested possible cardiovascular benefits of garlic. Many studies found garlic supplementation reduced accumulation of cholesterol on the vascular walls of animals and in humans. Another study had similar results, with garlic supplementation significantly reducing aortic plaque deposits of cholesterol-fed rabbits. Supplementation with garlic extract inhibited vascular calcification in human patients with high blood cholesterol. The known vasodilative effect of garlic is possibly caused by catabolism of garlic-derived polysulfides to hydrogen sulfide in red blood cells (RBCs), a reaction that is dependent on reduced thiols in or on the RBC membrane. Hydrogen sulfide is an endogenous cardioprotective vascular cell-signaling molecule.

Insecticides can be classified in different ways:
Systemic insecticides are incorporated by treated plants. Insects ingest the insecticide while feeding on the plants.

Contact insecticides are toxic to insects when brought into direct contact. Efficacy is often related to the quality of pesticide application, with small droplets (such as aerosols) often improving performance.

Natural insecticides, such as nicotine, pyrethrum and neem extracts are made by plants as defenses against insects. Nicotine-based insecticides are widely used in the US and Canada, but are barred in the European Union.

Plant-incorporated protectants (PIPs) are systemic insecticides produced by transgenic plants. For instance, a gene that codes for a specific Baccilus thuringiensis biocidal protein was introduced into corn and other species. The plant manufactures the protein which kills the insect when consumed.

Inorganic insecticides are contact insecticides that manufactured with metals and include arsenates, copper and fluorine compounds, which are now seldom used, and sulfur, which is commonly used.

Organic insecticides are contact insecticides that comprise the largest numbers of pesticides available for use today. The mode of action describes how the pesticide kills or inactivates a pest. It provides another way of
classifying insecticides. Mode of action is important in understanding whether an insecticide will be toxic to unrelated species, such as fish, birds and mammals. For products that repel rather than kill insects see insect repellents.(Wikipedia 2011)

The Black Pepper (Piper Nigrum) and Garlic (Allium Sativum) were bought at the Cogon Market and was collected at the Misamis Oriental General Conmprehensive High School last July , 2014 at 4 o’ clock in the afternoon.

i. Equipment and Apparatus

The Black Pepper (Piper Nigrum) was crushed with the Mortar and Pestle and the 1 whole International Garlic and 1 whole Native Garlic was first cut into box pieces and crushed with the Mortar and Pestle. The Mixture 1 was the 1 whole International Garlic and 20 grams of Black Pepper and the mixture 2 was the 1 Native Garlic and 20 grams of Black Pepper. The Researchers place the materials in each Beaker with the 2OOmL of water. The samples were boiled for minutes and simmer it and cool down. Then it was placed on each 5 spray bottle containers. The samples were tested at the Misamis Oriental General Comprehensive High School in Velez street, Cagayan De Oro City, Misamis Oriental.

The result shows how much insects died during the experimentation.

Black Pepper and Garlic as an Alternative Source for Insecticide. (2016, Apr 17). Retrieved from http://studymoose.com/black-pepper-and-garlic-as-an-alternative-source-for-insecticide-essay 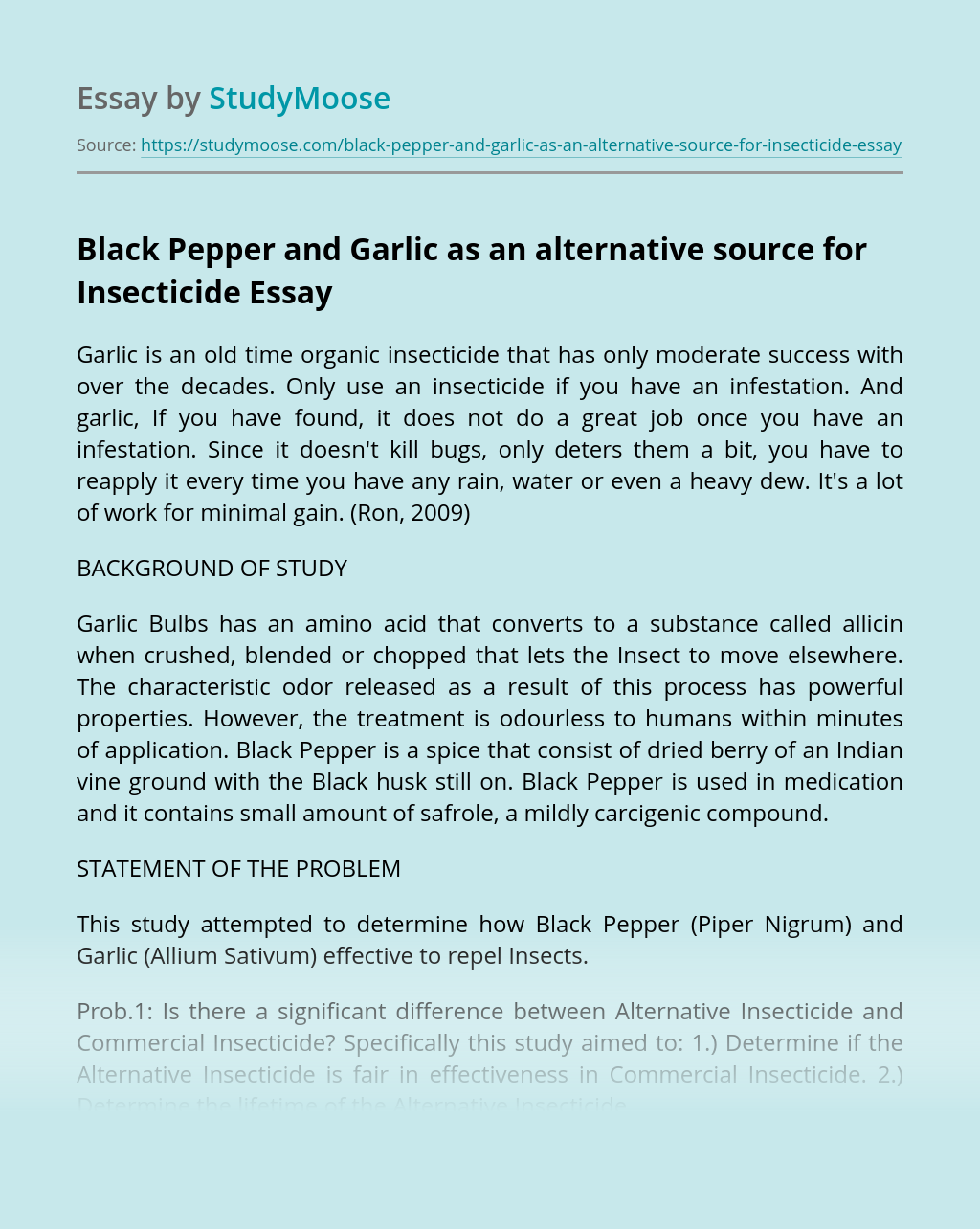 Turn in your highest-quality paper
Get a qualified writer to help you with
“ Black Pepper and Garlic as an Alternative Source for Insecticide ”
Get high-quality paper
Helping students since 2015
Stay Safe, Stay Original