In the informative essay “Black Men and Public Spaces”, Brent Staples describes his own experience growing up black in a racist society and discusses the interaction that take place with people. “The ability to alter public space in an ugly way”(302), through racial stereotypes affected him and many others. Stereotypes affect individuals regardless of race, sex, or religion. Author Brent Staples states he has been racially profiled on several occasions and has been falsely assumed to be a threat to the safety of others around him based on race.

Don't use plagiarized sources. Get your custom essay on
“ “Black Men and Public Spaces” by Brent Staples ”
Get custom paper
NEW! smart matching with writer

By specific stories, Staples explains his thesis through out the essay with narratives of incidents in urban America during the 1970’s and 1980’s. Staples first victim was a white woman in an impoverished section of Chicago. In New York, women feared him because their purse straps were strung across their chest during nighttime walks.

Another time in Chicago, he is mistaken as a burglar at his place of employment as a journalist with a rushed deadline story in hand.

Stables talked about people fearing him, especially white females, and confusing him as a mugger in the surrounding ghetto. He implies that whites usually picture blacks living in bad neighborhoods and being poor. People tend to connect poverty with criminal activity causing fear when walking alone at night. Staples created an emotional essay because the incidents are written in first person and very effective in stating his case that he has been racially profiled. He allowed first hand understanding of what it was like in a specific situation and what he felt.

The essay would be lacking without them. An example would be when he wrote “To her, the black youngish black man- a broad six feet two inches with a beard and billowing hair, both hands shoved into the pockets of a bulky military jacket- seemed menacingly close”(302).

Staples describe this encounter with his thoughts and feelings into the story. This woman was worried and the reaction she had, sets up the argument how his description was a threat even according to his own statement. Staples also wrote, “One day, rushing into the office of a magazine I was writing for with a deadline story in hand, I was mistaken for a burglar”(303). On another occasion, he enters a jewelry store where “the proprietor returns with an enormous red Doberman pincher straining at the end of a leash”(303). Staples nods and leaves the store. This is another important indication to understand the argument that Staples makes about being a victim of racial profiling and misrepresentation based on appearance. Staples used an ironic tone through out the essay with words like victim and survivor. He gives justification on why he should be a threat, but at the same time shows that he is a victim. Staples essay clearly states an argument and provides evidence to support the argument.

Staples understands the female thoughts of being a “mugger or a rapist”, but her flight made him feel like an “accomplice in tyranny”(302). Another example is how common stereotyping occurs with “Then there were the standard unpleasantries with policemen, doormen, bouncers, cabdrivers, and others whose business it is to screen out troublesome individuals before there is any nastiness”(302). This shows that Staples had more encounters than just the ones written in the essay and people view him as a threat because he is a young black man. I like the essay because the author seemed to be reliable and the theme engaged my interest. Stables’ character changed and the reader became to know him better. The story represented social classes making it more believable. One critical strategy is gender criticism. The comfort distance between strangers may be different with females and males. Staples knew the distance “seemed menacingly close”(302) would make the female feel uneasy.

It may have been different if the person Staples was walking by was a larger male. “Women are particularly vulnerable to street violence”, even admitted by Staples. How are women supposed to take measurements to be safe without offending a predetermined stereotype set by Staples? Staples describe himself as a symbol to stand for one thing, but mean something else. Staples wrote “faces on neutral”(302) meaning no facial expressions is an example of semantics. The word victim is a trope to describe a white female, who is a suspect of stereotyping. “Steely New Yorkers”(303) is a metaphor for a tough person. Staples used an offended and annoyed tone in the essay, but as the story continue the tone changes to understanding. Staple accepts the stereotype and that now he whistles classical music as a way to make others see him as non- threatening. 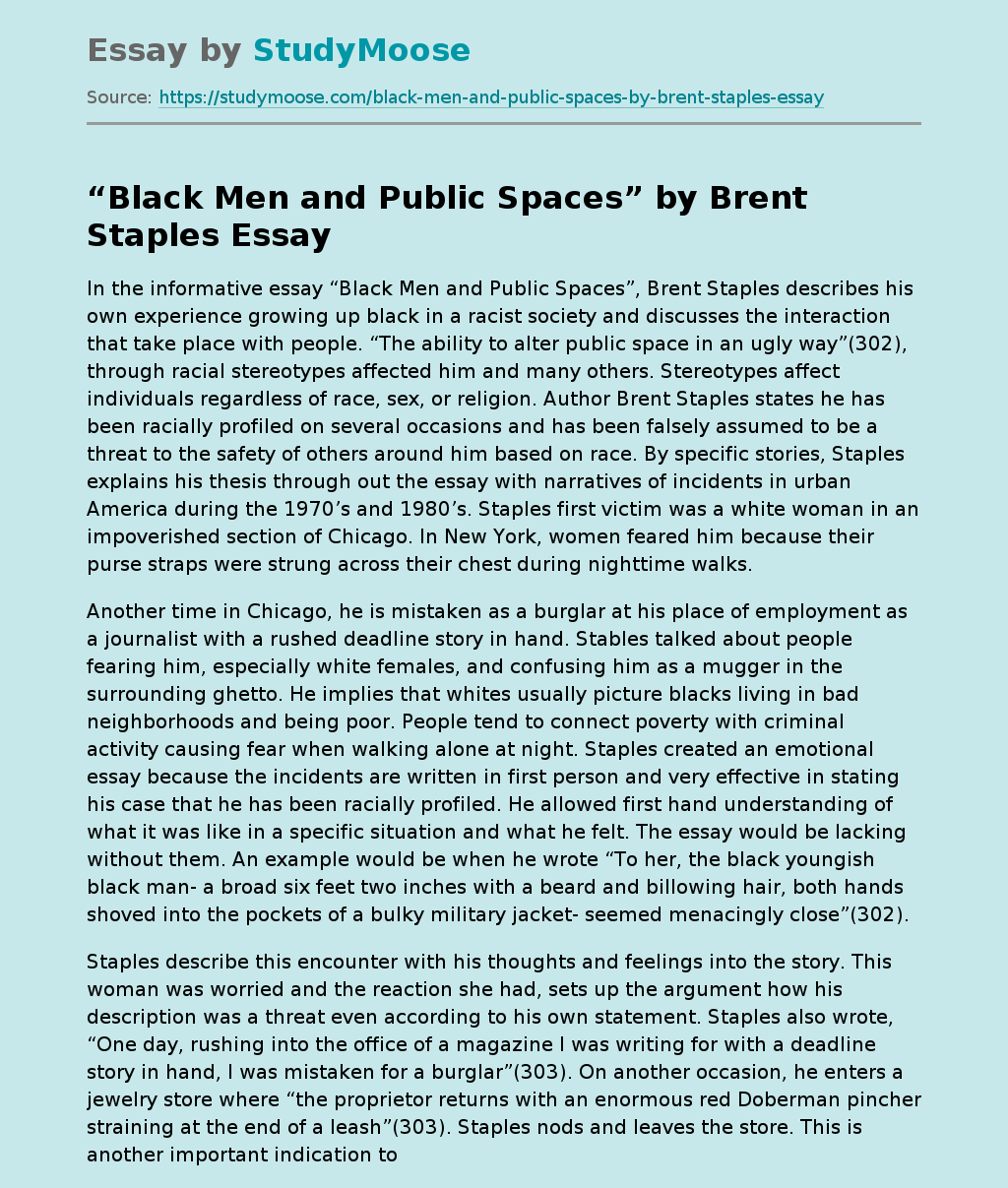