Biomes of the earth

A Biome is all of the life zones, all plants, animals, and other organisms, as well as the physical environment in a particular area. A biome is characterized by its plant life, which is determined by its location. For example, northern coniferous forests exist in sub-arctic portions of North America and Asia, but further north, the conditions are simply too harsh and the season too brief for trees to grow. Instead of trees, the short vegetation of the tundra thrives in these areas.

The same occurs with altitude, as trees give way to short alpine vegetation in high mountainous regions.

A biome is composed of many ecosystems, which are smaller communities of plants and animals and their habitats, the physical parts of their environment that affect them. Whereas, the boundaries of a biome are determined by climate, the boundaries of ecosystems are physical features, such as ridges or riverbanks, which separate one community from another. Any given place may have several different ecosystems that vary in size and complexity.

A tropical island, for example, may have a rain forest ecosystem that covers hundreds of square miles, a mangrove swamp ecosystem along the coast, and an underwater coral reef ecosystem. No matter how the size or complexity of an ecosystem is characterized, all ecosystems exhibit a constant exchange of matter and energy between the biotic and abiotic community.

The tropical rain forest is the most complex biome in the world. This biome is found at low elevations in the tropics where it is always warm and wet. Rain forests are characterized by a dense tree canopy tree top branches and leaves that overlap with each other, creating a shaded forest interior. These canopies may reach up to 160 feet high. The thick canopy allows little sunlight to penetrate, so rain forest floors have little ground cover. The soil lacks nutrients, and most plants are able to store what few nutrients they can absorb. There are more species of plants in rain forests than in any other ecosystem in the world. Deep within the clutter of dense foliage, individual species boast unique characteristics suited to their highly specialized existence. Middle-story plants, for example, often have large leaves to capture what little light filters through the canopy, while epiphytes have overlapping leaves that trap and store water.

The northern coniferous forest, also known as the taiga in Russia, is found in a broad subarctic band across Alaska, Canada, Scandinavia, Russia, and China, where the winters are long and cold. Conifers, such as spruce, larch, and fir, are the dominant plants, but lichens and mosses are abundant too. These forests usually occupy formerly glaciated regions and occur in association with lakes, bogs, and rivers.

The tundra is the treeless plain that lies north of the northern coniferous forests and on the Antarctic Peninsula in the southern hemisphere. Trees cannot survive in this biome because of the cold temperatures, high winds, and heavy snowfall, as well as the permafrost, a layer of permanently frozen subsoil. Plant life tends to grow low to the ground. In the summer, large numbers of birds migrate to the tundra to feed on insects. Other animals found in this area include reindeer, wolves, fox, voles, and lemmings. A similar biome, called the alpine biome, is found in high mountain areas around the world. Similar harsh conditions cause vegetation to grow low to the ground in alpine meadows.

Desert biomes are characterized by less than 10 inches of annual precipitation and high temperatures. To combat this lack of moisture, desert plants have developed water-conserving features, such as leaves that are light-colored, small, thick, or waxy. Animals that live in the desert are often light-colored, blend in well with their surroundings, and are usually more active at night to avoid the blazing heat during the day.

Grassland biomes are found on every continent except Antarctica, accounting for about one quarter of the Earth’s land surface. Typically found on flat or rolling terrain, grasslands tend to occur in the interior of continents where precipitation is lower. Periodic droughts occur in most grasslands, accompanied by searing heat that scorches most vegetation in the area. Grasslands are covered with grasses, sedges, and other low-growing, perennial plants. Drought, fire, and grazing by herbivores, such as bison and deer, restrict tree growth. Most grasslands have been extensively cultivated and are now regions where major crops of wheat, corn, and other grains are grown. Temperate natural grasslands develop in regions characterized by an annual rainfall between 10 and 30 inches.

The chaparral biome is dominated by dense thickets of mostly small-leafed evergreen shrubs. It is characterized by hot, dry summers and cool, wet winters. This biome can be found in the foothills of California and Mediterranean climate regions. Chaparral plants have adapted to the frequent fires that result from lightning and dry conditions. The chaparral shrublands of California, with mixed communities of low-growing evergreen or deciduous shrubs, represent a distinct habitat in large parts of western North America. Some of the most well-developed chaparral shrubland is found in the foothills of the Sierra Nevada and Coast Range mountains of California and in mountainous areas of Arizona and Utah.

Biomes of the earth. (2016, Jun 26). Retrieved from http://studymoose.com/biomes-of-the-earth-essay 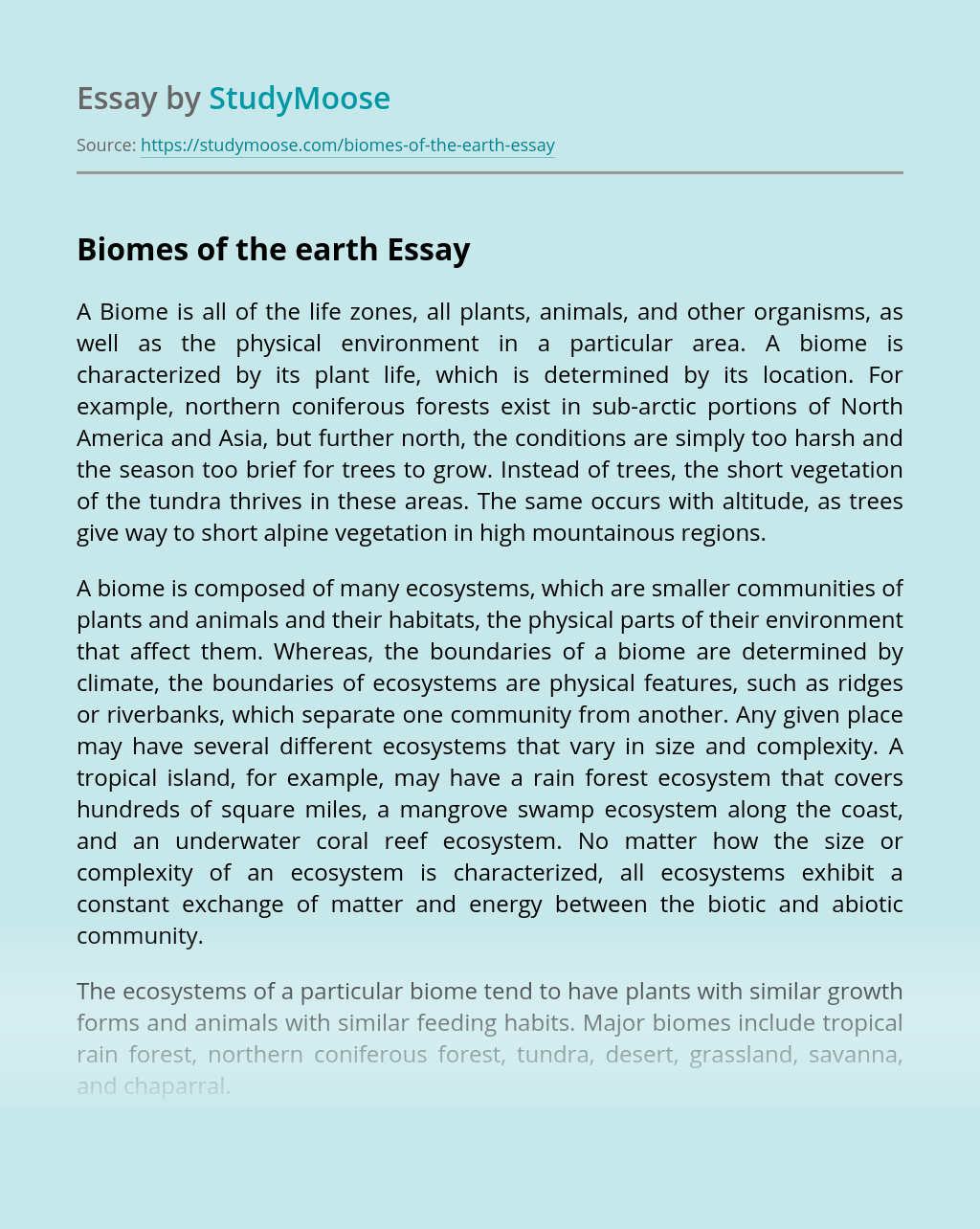