Aim: The aim of the experiment is to test the effect temperature has on the activity of the enzyme rennin.

Hypothesis: I believe the rate of reaction will speed up as the temperature increases until it reaches about 37oC, which is the body temperature, where it will begin to slow down and stop reacting. I believe this will occur because enzymes have a temperature range at which they work best in and once the temperature goes out of this range the enzyme will stop working.

Don't use plagiarized sources. Get your custom essay on
“ Biology: Experiment ”
Get custom paper
NEW! smart matching with writer

Introduction:Enzymes are made up of proteins which are produced within living cells and act as catalysts which speed up chemical reactions. They are made up of long chains of amino acids containing carbon, hydrogen, oxygen and nitrogen. Enzymes are structured to be unique to a few but often only one substrate therefore being specific to one type of reaction. A substrate is the molecule that an enzyme acts upon. An enzyme has an active site which is shaped for a specific shaped substrate.

The substrate and the enzyme bind together at the active site and form an enzyme-substrate complex. This then breaks down to form the products, releasing the enzyme. During the reaction the enzyme does not undergo change.

Most organisms can only survive within certain temperature ranges. For reactions to occur substances must collide with the correct orientation and necessary amount of energy, called the activation energy. The role of the enzyme is to lower the activation energy which therefore allows chemical reactions to take place inside organisms without the temperature having to be so high as well as speeding up the reaction.

Rennin is a protein digesting enzyme which is produced in the stomach of mammals such as cows. In the cows fourth stomach its function is to extend
the amount of time the milk remains in the stomach by thickening it. It is used in this experiment as it catalyses the conversion of the protein of milk called caseinogen to produce the compound casein. The casein will curdle the milk making it lumpy. As rennin is an enzyme it will be specific to a certain temperature therefore the rate at which the milk goes lumpy will demonstrate the effect different temperatures will have on enzymes.

2.Pour 5 ml of milk into six test tubes and keep in fridge.

3.Make enzyme mixture by measuring 25ml of water with the 100ml measuring cup and mixing in 1 level teaspoon of junket powder and set aside.

5. Get two test tubes with the milk and place in sauce pan making sure they sit so no water can enter the test tubes. Wait for the milk to reach 30 oC, using the thermometer.

7.Start the stopwatch and time how long it takes to clot*. Constantly check temperature, and turn up the heat if the temperature starts to drop.

10.Using the same saucepan, fill with water and ice cubes until it has reached 10oC, using a thermometer.

11.Once the water in the saucepan has reached the desired temperature get two test tubes with the milk and place into the sauce pan. Wait for the milk to reach 10oC, using the thermometer.

12.Stir then pour 2.5ml of the enzyme mixture into one of the test tubes not allowing any water from the saucepan into the test tube.

13.Start the stopwatch and time how long it takes to clot*.

Temperature controls the speed the enzymes work at. Higher temperatures increase the kinetic energy which increases the chance of collision therefore speeding up the rate of the milk solidifying. Once the temperature reached about 40oC the speed of the reaction began to slow down. This because once the heat rises above the enzymes temperature range the shape of the enzyme will change consequently making it ineffective because its shape will not fit with the substrate.

The results from the experiment support the hypothesis that the rate for the milk to solidify would speed up as the temperature got closer to 37oC and would slow down and stop once it passed that temperature.

In conducting the experiment I came across a few difficulties. One was keeping the temperature consistent. When heating the water it would still continue to rise about one or two degrees once I had turned the stove off then after a few minutes if would begin to drop so I would have to turn the stove back on again. It was also difficult keeping the cooler temperatures consistent as well. I had to keep restocking with ice cubes but if I put too many in it would drop below the desired temperature. Another difficulty was measuring the exact amount of milk and enzyme mixture. Parallax error could have made the measurements inaccurate because the view at which I looked upon the measuring cups could have varied each time.

An area to improve the reliability of the experiment would be to repeat the experiment more times. This would make the averaged result more accurate and by repeating the experiment any results that are very different to the rest of the results could be easily noticed and disregarded as they do not follow the same trends. The accuracy could be improved by having more accurate measuring equipment. For measuring the amount of liquids a pipette could be used to have more precise measurements of the enzyme mixture and milk. The thermometer has a margin of error of ±0.5 degrees therefore more exact equipment would make the results more reliable. The results from the experiment are valid as they are similar to the excepted value that the rennin enzymes optimal temperature is 37oC and follows the trend that the rate of reaction will speed up until it reaches that temperature then start to slow down once it has passed it. To further show enzymes being denatured higher temperatures could be used in the experiment.

Enzyme specificity refers to enzymes limitations to only react with on type of substrate. This can be demonstrated through the lock and key model which illustrates the substrate acting upon the enzyme. Once they combine they form an enzyme-substrate complex. This is where the amino acids of the enzyme break bonds in the substrate to form products. The enzyme is then freed and is not changed during the reaction.

Pepsin is an enzyme in the human body which is found in the stomach. Its role in the body is to break down proteins from meat, dairy products, seeds and eggs, into shorter chains of amino acids. These are then absorbed into the blood stream or broken down further. Within the lining of the stomach, glands produce and store an inactive protein called pepsinogen. When it is combined with hydrochloric acid it converts to an active enzyme, pepsin. The pepsin is most effective in pH levels of 1.5-2.5 though can still work up to about pH 6 and is ineffective when gastric acids have been neutralised. The temperature at which it is efficient ranges between 30 oC end 40 oC but can work at temperature between 15 oC and 48 oC.

Conclusion: The results of this experiment show that temperature affects the rate at which the enzyme rennin works. Rennin has a temperature range where it works most efficiently which is around 40 oC. Below 30 oC it works very slowly and once above 40 oC it starts to slow down.

The Effect of Temperature on the Enzyme Rennin. (2009). PGJHS. [Internet]. Available from: < http://www.pgjr.alpine.k12.ut.us/science/whitaker/Cell_Chemistry/enzyme.html> [Accessed on: 8 February, 2009]. 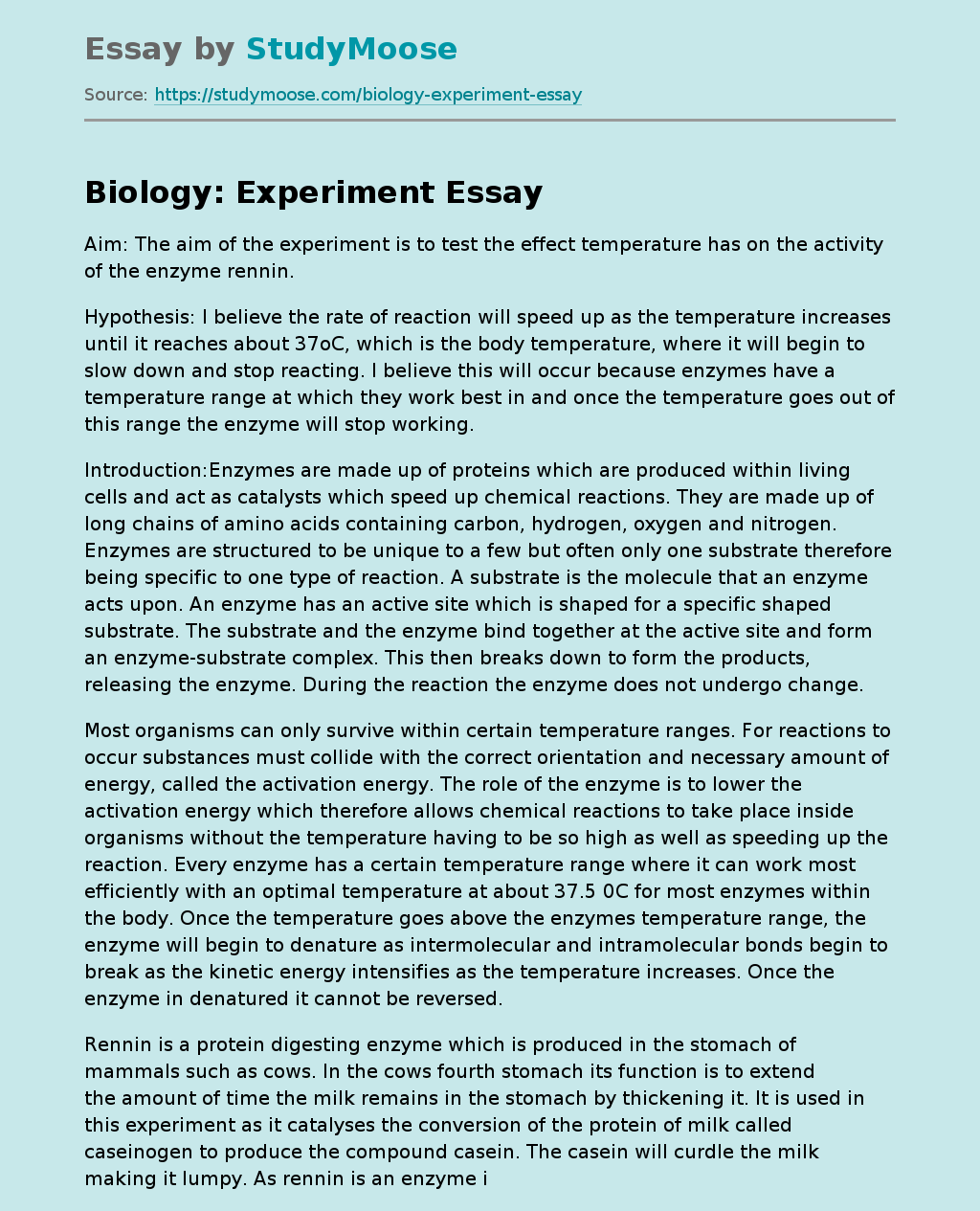