1.Elizabeth’s largest challenge considering her capacity needs, is that she outgrew her first facility’s capacity and then decided to move to a much larger facility where she realized she had considerably more capacity than needed for her business. Elizabeth is essentially paying for a facility she is not utilizing fully; therefore her sales expectations are not being met because of the bills she needs to pay with unused space. Elizabeth should have researched more into the facility layout before deciding to up and move her business to a new location.

Don't use plagiarized sources.
Get Your Custom Essay on Biddy’s Bakery: Operations Management Just from $13,9/Page

With considering this first, she could have accurately decided if the new building was the right fit for the arrangement of resources in the facility to enhance the producing process.

2.The proposal the business students at the university made for Elizabeth might not be the correct structure for her business due to the layout they are proposing involving a repetitive operation design. With a repetitive operation, the product variety is low, the degree of standardization is high, and the throughput time is shorter.

These are all characteristics that would not fit the business for a bakery. Her operation is Intermittent. A bakery is labor-intensive, because of the specialized orders taken by customers that Elizabeth and her business takes pride in.

The workers need to be able to perform different tasks, depending on the processes needed of the products being produced. The student’s just proposing the production of the McDoogle pie in large volumes, changes Elizabeth’s whole operations from Intermittent to Repetitive. She would need to create an assembly line type of organization and still suffer from unused capacity because she would then be cutting out a large part of her companies products by no longer taking special request orders.

3.Elizabeth’s bakery is Intermittent involving the use of project processes, batch processes, or a combination of the two. With a repetitive operation, the one the students suggest, would involve line processes or a continuous process both operating on a standard product produced quickly but with little to no customization of the products. Repetitive operations are not only large volume with little customization; they are highly capital intensive where Elizabeth’s operation is labor intensive needing specialized with workers with a variety of skills.

4.The business would be very different if Elizabeth decides to accept the university student’s proposal. She would be changing her whole operations system and would need automation equipment since she would only be producing one type of pie rather then the variety she has been used to. She would also have fewer inventories and mainly have to organize the layout differently to accommodate the new processing needs. The time however, would be increased and she would possibly see an increase in sales. The mission she originally set-forth with her business was producing a variety of baked goods with old-fashioned style and taste. With accepting a repetitive design, her mission statement would not be altered.

5.I mainly would suggest keeping an Intermittent design in the new building because Elizabeth’s business requires a variety of workmanship qualities not available with mass production. By accepting the student proposal and having her pies sold in a store, would mean she would be competing on a scale she is not used to which is price. With customization, she can keep her prices relatively high. Elizabeth may need to hire more skilled workers in her field in hopes of making her through process faster and inevitably, her baked goods to her customers sooner. By making her business focus more on the McDoodle pie in the new building is not entirely out of the cards.

Elizabeth could have both an intermittent and repetitive structure with the purchase of some automation to help speed up certain processes while keeping the layout design in the building separate. Most of her sales come from that pie so a larger percentage can be focused on that pie. FMS is a way for Elizabeth to have an automated system while still combining the flexibility her intermittent operation has to offer, with the efficiency still in tact of continuous operations. With this idea of combining some technology with her operation but still keeping her grouping technique of workstations, may help speed up her process and keep her variety baked goods in the hopes of increasing sales to help with bills while eliminating unused space so Elizabeth can work at full capacity. 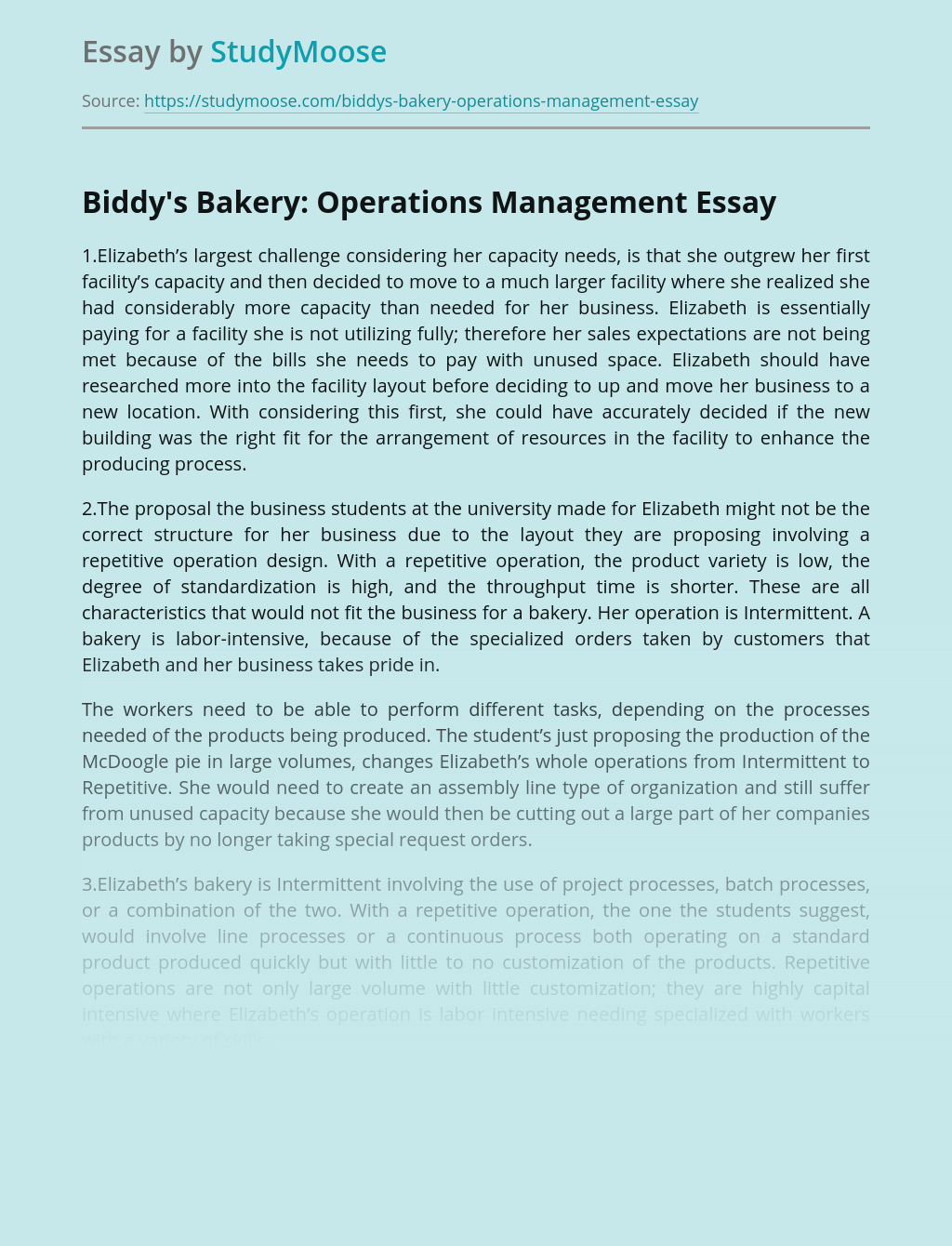 Introduction Stressed spelled backwards spells desserts, coincidence? I think not. Author of this quote is unknown. I have to fully agree with this statement because when I’m stressed or having a bad day, I just love to come to my kitchen and bake something. One of my favorite things to bake is a brownie. Thesis:... VIEW ESSAY

Sunshine Bakery will be specializing in visually attractive cupcakes and cakes. There has been a significant increase in demand for whimsical, overindulgent and visually stimulating cakes, and Sunshine Bakery will target special events such as weddings, birthdays, christenings, bachelorette parties and stork teas. The Products Sunshine offers a wide range of speciality cakes. All the... VIEW ESSAY

Goals are what shapes everyone’s lives to what they are. Whether it be an abundance or lack of them. Myself, I have planned many goals so I can become who I really wish to be. Without my little goals to guide me along the way, who knows where I could end up in this world?... VIEW ESSAY

A pastry chef or pâtissier (pronounced: [pɑ.ti.sje]; the correct French female version of the word is pâtissière [pɑ.ti.sjɛʁ]), is a station chef in a professional kitchen, skilled in the making of pastries, desserts, breads and other baked goods. They are employed in large hotels, bistros, restaurants,bakeries, and some cafés. A professional pastry chef presents a... VIEW ESSAY