Bible vs Inferno in a Poem Divine Comedy

Written by Dante Alighieri between 1308 and 1321, the Divine Comedy is widely considered the central epic poem of Italian literature. Dante’s inferno gives many people an idea of what hell could look like. It makes many think about sin have been committed and the punishments that could entail. The nine circles that Dante makes are completely influenced by him. The Bible says nothing about circles or specific punishments for sins. Even though Dante was a devout Catholic who based some of his crimes the Bible, many of his punishments and his description of crimes however were portrayed differently in his writing.

Don't use plagiarized sources. Get your custom essay on
“ Bible vs Inferno in a Poem Divine Comedy ”
Get custom paper
NEW! smart matching with writer

One of the biggest differences between Dante’s work and the Bible is that in the Bible everyone who goes to hell gets the same punishment. “And whosoever was not found written in the book of life was cast into the lake of fire”. (Revelation 20:15) The book of life is where the sins of everyone is written down and from that list of sins is how it is decided who will go to hell.

To many, like Dante one universal sin is unfair. Dante’s vision of hell involved such eternal punishments as souls tormented by biting insects, wallowing in mud, immersed in boiling blood, being lashed with whips. Lesser punishments involve having heads on backwards, chasing unreachable goals for eternity, and walking endlessly in circles. People commit many levels of crimes and why should someone who committed an extreme act of violence be placed in the same place as someone who only committed lust? Well the Bible gives the impression that any sin against the Ten Commandments will be punished unless you repent.

This instills fear in people not to commit crimes and not matter what sin big or small you will be punished with a horrible crime.

The climate of hell is also different in the Bible and The Inferno. The Bible is said to be very hot and full of fire. “A place where men are tormented with fire and brimstone”(revelation 21:8). While The Inferno is the opposite. Some of the circles of hell in The Inferno are said to be hot or burning but the deepest and last circle hell is frozen over and the criminals are placed frozen from the neck down. “There where the shades were wholly covered up, and glimmered through like unto straws in glass.” This quote explains how they were like straws in glass the glass being the ice in which they were frozen to. The comparison between the two different settings of the most intense punishments shows that the Bible and The Inferno have different views of hell.

There is also no mention of the beasts ,creatures and guardians that are present in Dante’s Inferno.First creature those in hell encounter is Minos, as the infernal judge and agent of God’s justice. “Many books are opened, one of them being the Book of Life. The dead are judged according to their works.”( Revelation 20:11-15 ).There is no reference of Minos at all in the Bible only The Book of Life from which everyone is judged.As for the other creaures in hell such as; Charon, Nessus and Antaeus all present in greek mythology .

In conclusion Dante’s version of The Inferno is more of a journey through his interpretation of what he thinks hell is like. The Bible, to many is the true source of what we should expect in hell. While The Bible says by repenting you sins you can go to heaven The Inferno says nothing about redemption after the crime is committed. The Inferno shows more of Dante’s opinion based on life experiences and people he had issues with in his lifetime. The Bible is the accurate source for the Christian version of the underworld or hell. Furthermore Dante did take some ideas from the Bible but most of his work is of his own mind and should not be followed or truly believed.

Bible vs Inferno in a Poem Divine Comedy. (2020, Jun 01). Retrieved from https://studymoose.com/bible-vs-inferno-new-essay 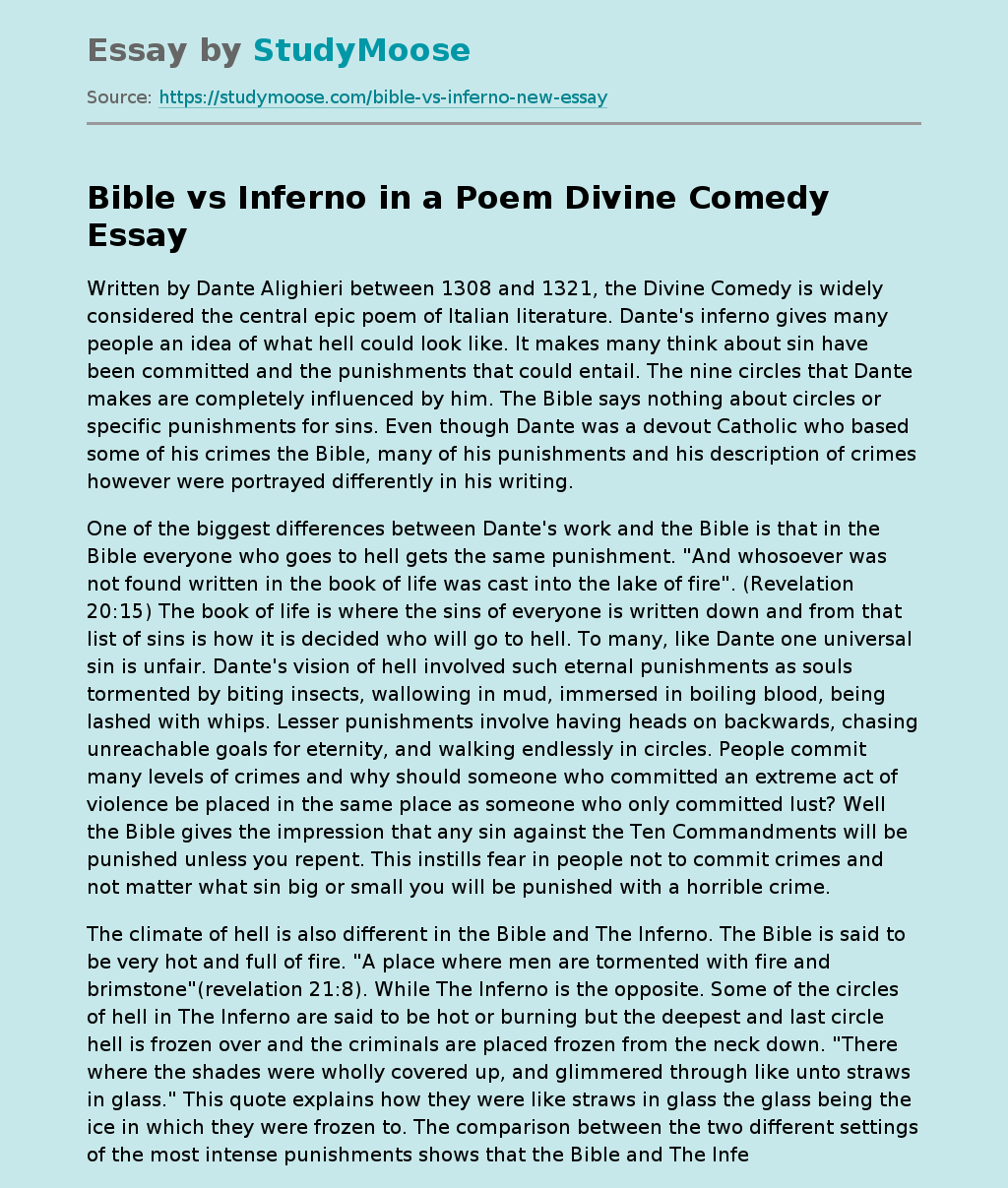