Behavior and Qualities of Characters in Novel Sula

Toni Morrison writes the book Sula with the intention of questioning the idea of good versus evil. “The novel invokes oppositions of good/evil, virgin/whore, self/other, but moves beyond them” says Deborah E McDowell( 82). The characters in Sula give the novel its great interest by using different behaviors and qualities for each character to prove the author’s intention. Sula has established its purpose in writing through the characters to inform others on good versus evil. Toni Morrison makes sure to identify several different characters in this novel as conventionally good and others as conventionally evil.

Don't use plagiarized sources. Get your custom essay on
“ Behavior and Qualities of Characters in Novel Sula ”
Get custom paper
NEW! smart matching with writer

The character Nel is a small town conservative and quiet girl. She hides behind innocence, when in actuality her heart is evil. Sula is a city girl that is completely independent and blunt. Though she does seemingly evil things, she is still honest and prideful which makes her heart good. The book Sula goes from the time periods of 1919-1940. During this time we read about two girls, Sula and Nel, as they grow up.

The book takes place in “The Bottom. ” White landowners promised freed slaves a piece of heaven by living in the hills of Medallion, Ohio.

However the white landowners would take the richer version of the valley leaving the freed slaves with a rough life. In the beginning of the novel at 1919, the two girls Sula and Nel just begin to meet. They become very attached to each other in their adolescence years. In Nel’s family, they believe in social conventions.

Her home is stable and more traditional than Sula’s. It is represented as good because the family goes to church; they seem outwardly respectable, and the house is neat and tidy. Sula’s home is different.

She lives with her grandmother and her mother Hannah, who later dies; both are seen as odd and nontradional to the town because the house is chaotic; the women freely love men, and there is no dominant male figure in the home, a recipe for the stereotype of evil. Despite their differences the girls become best friends and live life together. One day a tragic accident occurred. Sula swings her friend Chicken Little into a nearby river and he drowned. Nel and Sula agreed to nerver tell anyone about the accident.

After that the two girls starts to grow apart. Later Nel reflects on this incident remembering “the good feeling she had had when Chicken Little hands slipped (Sula170). While “Sula had cried and cried when she came back from Shadrack’s house. But Nel had remained calm. ” Sula 170. ” With this quote it shows us who’s heart is really evil while Sula is showing remorse, Nel is excited to see the boy drop in the river. Time goes by and Nel settles down and gets married and have children. However, Sula lives and independent life.

Sula eventually travels for ten years and then returns. Throughout the novel the theme, good versus evil is shown. Nel is known as good overall. She is innocent, while she is also conservative and shy. She is married with children which makes her follow the female patterns of the town. With those qualities, she is an all American good woman. In society Sula is showed as evil and offensive. She decides to go off to college and does not come back for ten years. When Sula returns she comes back with a plague of robins. This was a sign in its own words.

The robins came with “to much heat, or to much cold , to little rain, rain to flooding”(Sula 81). Sula was also assigned the role of evil because she was free with her sexuality and freely flaunted her sensuality and her independence. “She attracted the glances of old men sitting on stone benches in front of the courthouse, housewives throwing buckets of water on their sidewalks, and high school students on their way home for lunch…. There were scattered hellos and nods but mostly stares. A little boy ran up to her saying, “carry yo’ bag, ma’am?

” Before Sula could answer his mother had called him, “You, John. Get back in here. ” At Eva’s house there were four dead robins on the walk. Sula stopped and with her toe pushed them into the bordering grass” (Sula 90-91. ) This is an example of Sula being offensive. The housewives find Sula to be unlady like, while the men find her as temptation which makes women jealous and offended. Sula is not afraid of her sexuality. She sleeps with different men only once which in society is considered wrong. She commits adultery with Jude (Nel’s husband) which is a sin or evil.

However Nel sleeps with her husband Jude because she feels as if it’s another job of hers. She is not free of her sexuality. She is confined to think her only goal during sex is to please her husband. During this time it is normal for women to think that way. That was considered being a good wife. However, Sula did not want to fall into that catorgory. ” Sula’s sexual expression is not attached to anything outside herself “(McDowell 83). Therefore she does not see it as being sinful o r evil she sees it as being free of herself. In the story, Sula gets blamed for a number of things.

The towns people blamed her for the malnutrition boy falling, the man choking on a chicken bone, the lady getting a sty on her eye by looking at Sula and for bringing the plague of birds. These things considered Sula evil. However, what the towns people did not realize is that Sula brought a presence that improves the community. Sula was different. She embodied what all the wives wanted freedom which was something weird so that all cast her as evil. A true evil person would just bring a dark cloud to the community with a heavy unpleasant emotion.

After the incident with Jude, Nel became like the towns people. She judged Sula because she did not live by rules or containment. She was simply free and everyone was jealous of that. Soon Sula falls in love with Ajax. He is the only person to see Sula for what she really was and independent women. She reminded him of his mother. He loved the fact that she was not domestic and that they considered each other as equals. Sula soon falls under the pressure of being domestic which is everything she is against and he soon leaves her. Sula is a book about uncertainty.

It questions good versus evil. Sula was blamed for being evil and bad, but she lived her life honestly. Nel lived her life private and as a lie. Honesty is a trait of someone with a good pure heart whereas a lie reflects someone with an evil heart. This book definitely questions beliefs about what is good and what is evil.

Behavior and Qualities of Characters in Novel Sula. (2016, Nov 12). Retrieved from https://studymoose.com/behavior-and-qualities-of-characters-in-novel-sula-essay 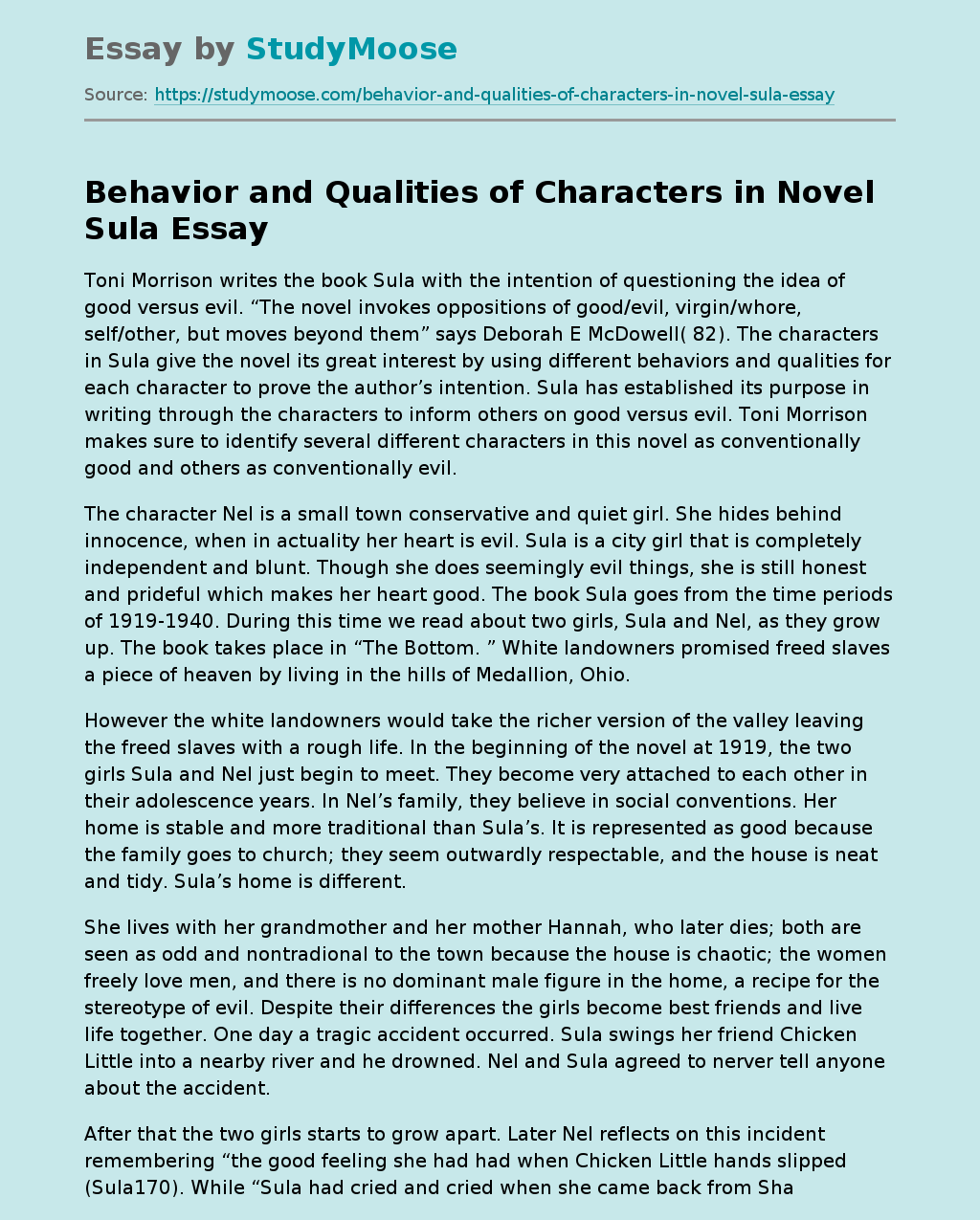