Be Careful What You Wish for

Whua! Whua! Whua! The crying of a baby boy in the middle of the darkness of night, in a wobbly hut with a fond mother next to him holding on to the pain of labouring minutes ago. During the age of three months, in her mother’s womb, he lost his dad. Mr Drew, who served as a crew on the crab fishing boats ‘Cornelia Mariee’, died in a dreadful tragedy. During the previous fall, Mr Drew went to the high sea.

Don't use plagiarized sources. Get your custom essay on
“ Be Careful What You Wish for ”
Get custom paper
NEW! smart matching with writer

Unfortunately, the sea was rough. Nature was raging. There was no match to the power of nature. The lives of ten crews were at stake and eventually, all died.

The Cornelia Mariee became brother to The Titanic – both sunk to the bottom of Atlantic Ocean. The news was displayed throughout the nation. By chance, Mrs Drew at the moment was walking beside a television store in the heart of New York City. She saw the news and burst into tears.

She was merely crying as there was nothing she could do. A lonely and dull future started to wave – indicating her to prepare herself raising her child that would be delivered in 6 months’ time. That baby was named after his dad – Daniel Drew. Daniel grew same like other normal kid, it was just he had little less money, father’s affection and toys perhaps.

Although Daniel lived in poverty, mother’s fondness was enough for him. But, everything changed when his beloved mother had a rare disease that even confused the doctors.

Due to no money for surgery and lacking of experts, fate had spoken – Mrs Drew was confirmed dead on 24th April 1984. Daniel was there, beside his mother all the time till the last sip of breath. Mrs Drew left Daniel a few pennies, sweet memories and valuable advices. Being only seven, it was hard for Daniel to understand what was going on. The only thing he knew was he was alone. Where were his grandparents?

Should not they the one who take the responsibility now? Mr Drew came from a noble and a wealthy family, but a few years ago, because of his true love, he was willing to lose all the money, the power and the family ties due to their unblessed relationship. Daniel lingered throughout the city with nowhere to go. Following his small feet. Luckily, there was a woman from an orphanage saw Daniel and took him to her orphanage. Daniel was now 23 years old. In this past 16 years, a lot of things had changed – Daniel’s look and behaviour. Daniel had grown smarter, more charismatic than before.

What matters now was Daniel seemed to be completely another person – chaotic, money possessed and selfish. Somehow maybe the hardship of life and surrounding factors had transformed the old Daniel to the new one. The story began when Daniel graduated from Brooklyn University and ended up only an office boy – the rate of unemployment was increasing, leaving no choice to Daniel. Usually an office boy only earned $350 per month. Daniel worked his socks off everyday and still be paid for the least amount of pay. Days after days, months after months and years after years, Daniel started to feel discouraged.

No money, no life companion and no enjoyment of life. Daniel was so broke. His economy was unstable; things, goods and fuel were getting pricier – life so hard. No girls attracted to him to make him as a husband due to his state of economy – to have someone beside to cheer him up in this quite moment was desperately needed. His life was a mess, same goes to a house that he rented. Its untidy condition made Daniel became more stressed. He could not put everything in its very own place. He flung everything – something was here, something was there, everything was everywhere! Daniel had had enough.

He needed to do something with his life. He had to mend his life but with what way? Daniel was thinking about money. Yes! Money would work. But Daniel hoped he could get the money in a blink of an eye – the express way. Whenever lust was ruling, never make a decision. That was the lesson. 10 am sharp, Daniel stood still in front of a loan shark’s office at suburb. Daniel had waited for too long till he was about to lose his temper. Then, he heard footsteps, one by one, nearer and nearer.

He was anxious. He lifted his face and bam! A heavy-loaded loan shark was there. They greeted and the conversation started. Frankly, Mr Zee, I’m here to borrow some money from you. ” “Oh! You’re most welcomed. How much do you need my friend? ” “Not so much. Only $150000. Can I? “For sure! But you must repay me every month. Deal? ” “Deal. ” Agreement was made. Pictures, thumbprints and information of Daniel were taken in case anything would happen. Daniel had been handed in a thick piece of cold hard cash. He could not believe his eyes. Daniel had never hold money that much! Daniel started to build castle in the air – he bought this and that, lived in a mansion, drove a new sports car, had a family and no need to be an office boy anymore.

Daniel walked home. He kept the money securely with him. Unfortunately, as he walked through a back alley heading to the house that he rented, a gang of gangsters appeared out of the blue. He was trapped, no room to escape. Daniel had been beaten up to the limit. He was black and blue all over. Daniel’s white shirt turned red. Intense pain was felt. It was even more painful when those gangsters robbed him. Daniel tried his best to defend the money but he had zero energy left. Only able to see them went away with the money helplessly. Daniel froze in disbelief. Three months passed. Daniel in the house, sleeping.

The door was knocked and turned out Mr Zee’s men were outside. This was the fifth time they stopped by. Today, Daniel’s face would not be as handsome as before, guaranteed! The incident happened at the back alley recurred. A concerned witness who lived nearby called an ambulance. Fifteen minutes later, the ambulance arrived. Daniel was taken to the hospital – he had been hospitalized for two days. Once he was discharged, he made his way to a police station nearby. He lodged two reports – first, about the incident at the back alley where his money was stolen and second, the incident at his house.

In only thirty minutes, Mr Zee and his men were arrested – policemen were efficient! Mr Zee and an investigator were in a closed room, investigation took place. The investigator went out of the room with a shocking news. Apparently, those gangsters who had beaten Daniel up were paid by Mr Zee. He was the one behind all this, only for double profit. How cunning! Mr Zee and other wrongdoers had been imprisoned. How about Daniel? Of course there was a happy ending for him. He got married and became an important person in the office which once, he was only an office boy.

Be Careful What You Wish for. (2016, Nov 03). Retrieved from https://studymoose.com/be-careful-what-you-wish-for-essay 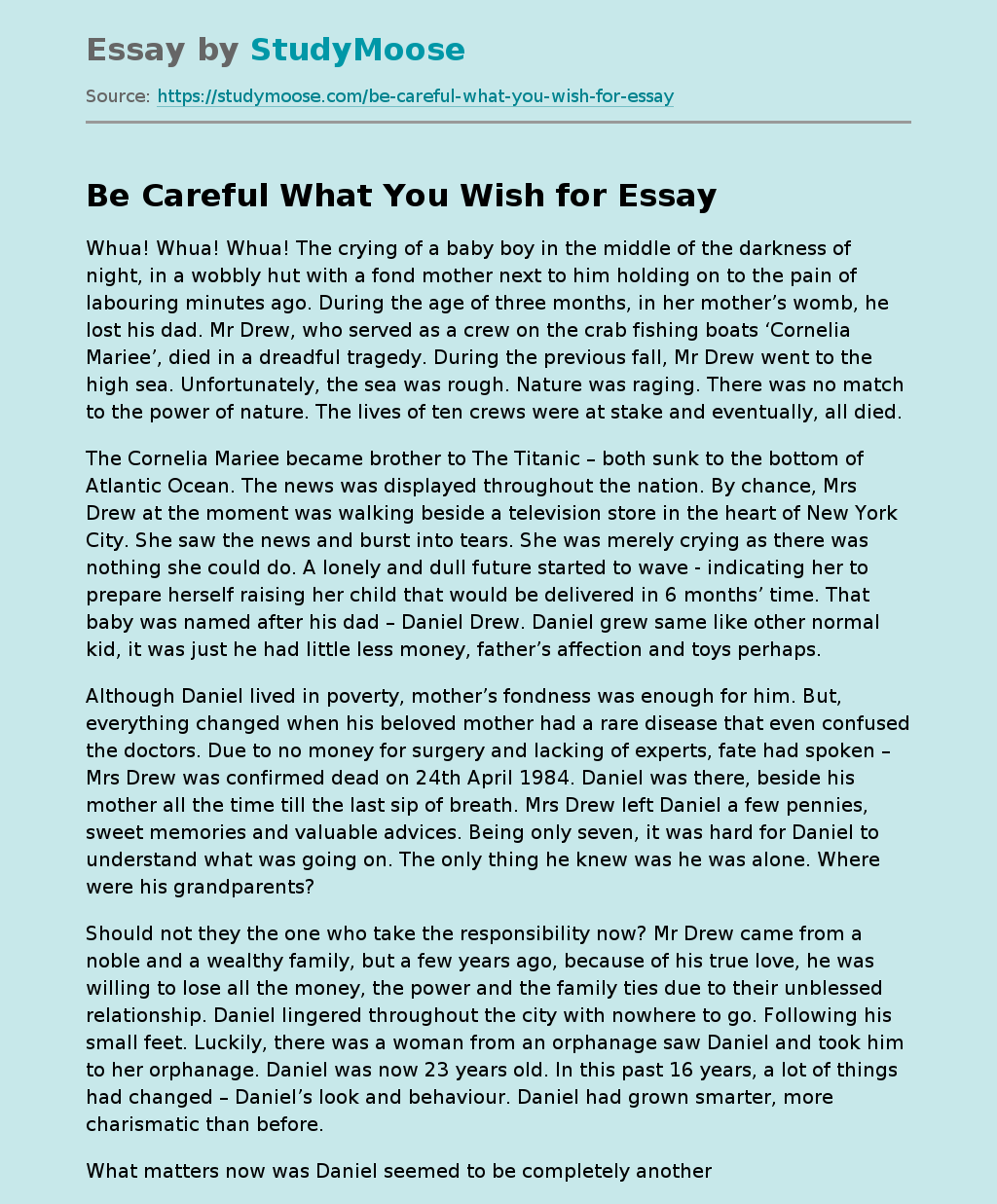