Batman Vs. Ironman: Battle of the Billionaires

In this age of superheroes, they have become so popular that people have regarded them as icons. Two of the biggest icons from different from different comic and cinematic universes, have been often compared to see who would ultimately come on top if they were to go headed together. From fighting capabilities, financial capabilities and smarts the essay will compare the similarities and differences of the superheroes.

Ironically two of the most iconic superheroes from both DC and Marvel comics don’t have superpowers.

Don't use plagiarized sources. Get your custom essay on
“ Batman Vs. Ironman: Battle of the Billionaires ”
Get custom paper
NEW! smart matching with writer

Without all their gadgetry they would have been countless of times during all their dangerous comic escapades. It might be the reason why they are so popular. Too brave men fighting against world disasters that they should not possibly survive from yet come out on top time and time again. Their mortality is their commonality however people would argue with good reason that in a hand to hand combat with no weapons or suites Bruce Wayne (Batman) would win against Tony Stark (Ironman) and they have good reason to.

Bruce Wayne is a trained ninja as he has been trained from different styles and techniques since the age of 8 while tony on the other hand relies on his suit. Skills and instincts are something that fans will agree that Batman have Ironman in a man vs man clash. Batman is a master of the jack of all trades and countless ordinary people strive to one day come similar in there day to day lives which is maybe why he is so popular.

He complements todays ideals that hard work will always pay of in a way Tony Stark does not.

Money, money, and more money, one thing these two men have in common is the loads of cash sitting in their bank accounts that can never possibly spend in a lifetime. Similarly, they both inherited the family fortune after the tragic passing of their parents though at different ages. They have since moved on and took control on these companies and maintained a good profit. Money does come with their drawbacks as it was so often known for them to use it for a good time especially with the ladies, this applies more to Tony Stark than Bruce Wayne though a truth for both. Tony Stark however narrowly edges out Wayne in the battle of billionaire playboys. Interestingly, while Forbes ranks Stark’s wealth ahead of Batman, the publication lists Stark Industries’ revenue ($20.3 billion) as less than that of Wayne Enterprises ($31.3 billion). Chalk it up to Wayne’s legendary philanthropy (Davidson, 2015). With this amount of wealth they have alll the resources in the world to turn these two common men to gods among men, a pharse apptly used to describe the two of them. They could technically throw bags of money to fix there problems.

One of the biggest reasons that these to men perform a cut above the rest is there in intelligence. In equal terms, both Bruce Wayne and Tony Stark possess genius intellect level. Bruce Wayne is known to be versatile in almost all subjects, while Tony Stark is adept at computers, technologies, and cybernetic inventions (The Battle Between World’s Smartest Men: Batman vs Iron Man!, n.d.). Batman as agreed by all if given enough time to prepare can take down any foe and Tony stark with his brilliant mind creates technologies that we only dream were to be true. These men have used there brilliant minds to fight agaisnt things no man should be able to and it is why so many people love them for it.

When it comes down to it no one will argue about the influence of these two characters in modern society. So many people look at up to them as a source of instpiration despite how fictionous they are. To judge whether or not one would be more influentionus is hard but todays cinematic fame has made the final verdit much easier. The death of iron man; a few years ago any truly comic book fan would tell you that Batman is more of an icon than Ironman. But to day despite how much they will still hold that opionn the Marvel Cinametaic effect has proven that for now the death of iron man will remain on the minds of coutnles more people as they draw from his choice as inspiration.

Batman Vs. Ironman: Battle of the Billionaires. (2021, Aug 04). Retrieved from https://studymoose.com/batman-vs-ironman-battle-of-the-billionaires-essay 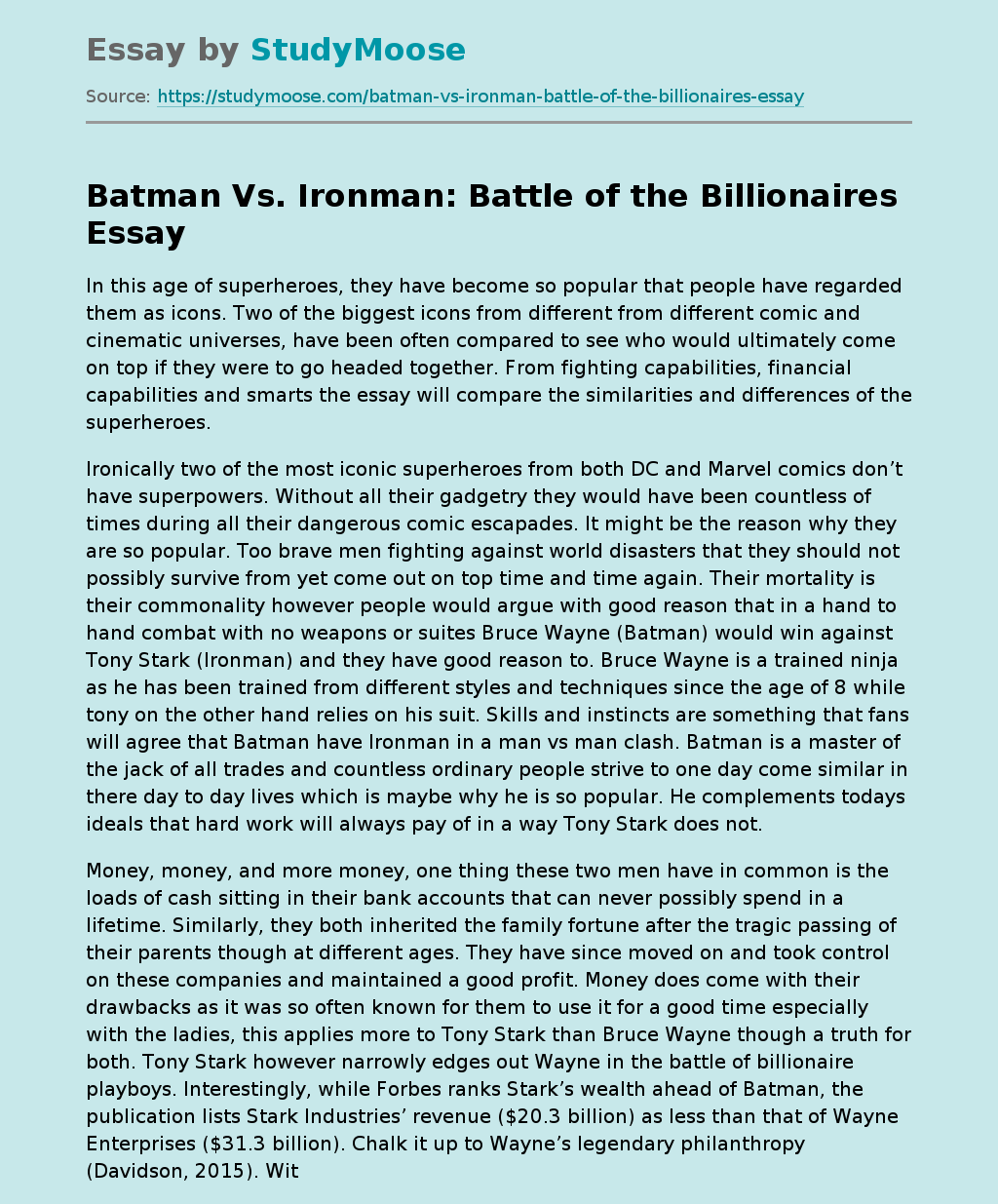