Students from affluent families are placed in more college-oriented tracks than students in less affluent families There is a general belief by many that students from wealthy families have a better chance of performing highly academically than their peers from poor families. Many have agreed that despite there being different opinions on the ideology and politics, there exists educational inequalities that are based on race and economic backgrounds. The inequalities pose a great problem in the educational system.

It has been debated that economical and social disadvantages are part of the inequalities in students’ performance in school (The Ohio State University, 2009).

Don't use plagiarized sources.
Get Your Custom Essay on Barriers to College Completion for Low-Income Students Just from $13,9/Page

However, there are those who support some studies that have shown that under some conditions, there are students that still perform well despite some of these disadvantages (Harris, 2006). This research paper confirms the hypothesis that students from low families are placed in more college oriented tracks than low income families.

It has been claimed that poor students and their low income parents have relationships which are, in many cases, physically and emotionally unhealthy (or less healthy) and which are created by economic pressures.

This however may not be an absolute cause of poor performance as some students from high income families experience similar relations with their parents while poor parents in some cases avoid such clashes (Harris, 2006).

Some of the barriers that face these poor students include juggling family, work and school; lower English proficiency and other skills; logistical and financial options and lack of exposure to career options among others (Duke, 2006). Frean (2007), who is an education editor, argues that the main reason why the educational performance gap is widening between the students from the rich and the poor in academic performance is because students from middle class families have colonized the best State schools.

The then UK’s shadow Education Secretary stated that education system favors the rich and the fortunate enough as the rich parents are in a better position to enroll their children in better schools that are equipped with better learning facilities (Frean 2007). Chiles (1997) concludes that wealthy communities simply have better schools. He states that in the State of Jersey, the scores that were once released after a school test revealed clearly that there is a clear relationship between wealth and student performance (Thomas, 2005).

There is a similarity between the rankings of districts by the students’ perforce and by wealth. The locals Education department reported that what determines the students’ performance is in fact what they experience before they report to school, including socialization (Chiles, 1997). Chiles states that one of the main contributors to the poor academic performance by the students is their teachers who treat them differently from the rich ones. The teachers in many cases internalize negative images of families and children who are from lower economic class.

He however explains that riches do not automatically lead to better performance but it is the enriching experiences the money provides that enable students to understand and absorb enough material (Chiles, 1997). A research report by Centre on Education Policy conducted in October 2007 showed that low income students who also are in urban high schools generally performed well academically just like their colleagues in private high schools, with all factors pertaining to family background taken into account.

Many of the students in private schools often originate from wealthy backgrounds thus they may have an advantage as they are provided with skills (test taking) that enable them to proceed with their academics (Centre on Education Policy, 2007). There are some reasons that have been raised on why students from low economic backgrounds perform poorly academically. First, because these students have constraints in their families as a result of poverty, they are likely to have lower numeracy and literacy outcomes.

This is because they come to school less prepared and with lesser learning support. These subjects are the basics for studying other subjects thus the students generally end up performing poorly (DEECD, 2009). The other reason raised is that students from poor background lack learning strategies useful for leaning as they do not the outside classroom experiences as compared to their peers from wealthy families (DEECD, 2009).

In addition, it is noted that students from poor families are never exposed to formal register (language) while at home which is the one that is used in schools and may decrease their performance rate (DEECD, 2009). Those students may also have less expectations due to the altitudes and expectations that they get from their parents who are already disappointed in life (Rothstein, 2004). The School-Level Achievement Database (SLAD) has analysis for about sixty two thousand schools from the forty seven States of the USA showing that it is only one percent of schools with high level poverty that perform well academically.

Some of the reasons that have been raised are that students from poor background are more likely to face malnutrition and illnesses that may cause the students not to concentrate in their studies or even miss classes, acts that are translated into their poor performance (Harris, 2006). Analyses from the United Kingdom’s government database have shown that the educational attainment gap between the poor and the rich students has continued widening.

The research done on ten percent poorest and richest areas (students aged seven years) showed a gap of twenty percent points in 2007 (Frean, 2007). For the students aged sixteen years, the gap was wider (43. 1 percent) bringing the argument that schools were venues of increasing the disparity. From the research paper prepared by Harvard Achievement Gap Initiative, it was revealed that it was only sixteen percent of high poverty schools that perform highly as compared to fifty four percent of low poverty schools.

This in other words means that schools that have low poverty level are three times more likely to perform highly when compared to the schools that have a high level of poverty (Harris, 2006). In other research findings, it was indicated that students from middle class backgrounds take the larger part of the top University places. It was also revealed that more than fifty percent of all the students in top Universities in the United Kingdom are from these backgrounds.

In contrast, the research showed that students from the poorest twenty five percent of families only made up a mere 6. 3 percent of the students’ population (Scotsman, 2009). From the information gotten from different authors, it is clear that it has been hypothesized that students from poor families are vulnerable to performing poorly in their academics and thus placed in less college oriented tracks than those from richer background.

To confirm the hypothesis, many researches that have been conducted agree to the hypothesis. The reasons that have been raised are both family and school based. It is clear that many obstacles are placed before the academic lives of poor students while at home and even in school that result to them performing poorly in school. They are not motivated to work hard and are never given career guidance regarding their joining of colleges. This explains why many of them end up not joining the institutions of higher learning. 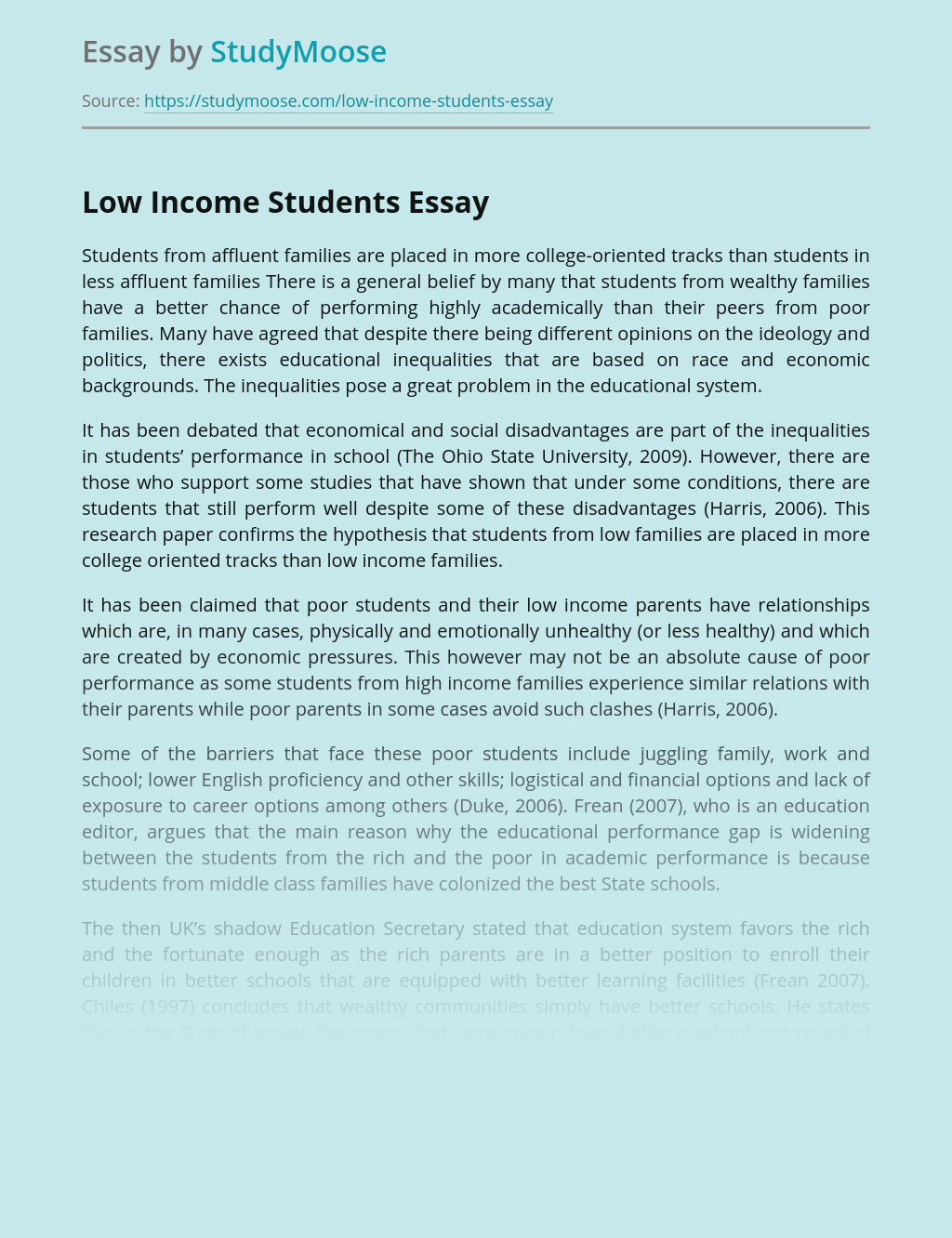 The two songs “Indian Reservation” by Paul Revere and The Raiders, and “Seminole Wind” by John Anderson expressed emotion, culture, and religion. “Indian Reservation” song has more of an ‘upbeat’ tempo, and the lyrics that the band sang are a personal view of a Native American or Cherokee tribe. The lyrics seemed angry as they...

To Kill a Mockingbird Chapters 22-31 Questions

1.Atticus is extremely disappointed and walks out of the courtroom after the verdict is announced. 2. When Miss Maudie is explaining that they had people like Atticus, she was telling Jem that there were people in this world who do not fall into mob mentality. She tries to explain that even though Atticus did not...

In the films Black Robe, The Crucible, The Patriot, The Alamo, and Cold Mountain, the authors created historical inaccuracies for the audience of the generation they were made for. This means they would change some details to fit their idea of what the people felt in that time in history, to grip the audience and...

Phillip II and The Armada in History of England

Why did Phillip II release the Armada and why did it fail? In the summer season of 1588, the catholic king of Spain, Phillip II, developed a plan to conquer protestant England. He would gather his army from the Netherlands and a huge fleet of 130 ships throughout the channel, with the aid of France....