Australia has over 1 million different native species. Australia’s unique variety of plants and wildlife has evolved as a result of our countries unique conditions. This is a result of Australia’s geographical isolation. From deserts to rainforests, mountains and plains; this environment has created unique animals suited to their environments. As a result: * Australia has 10% of the world’s biodiversity.

Don't use plagiarized sources. Get your custom essay on
“ Australia’s Unique Flora and Fauna ”
Get custom paper
NEW! smart matching with writer

* Of the 860 plus species of reptiles, 773 cannot be found anywhere else in the world. Flora

As Australia has been isolated for thousands of years unique plants have developed to cope with the harsh and hostile conditions. Characteristics include red, white and yellow flowers and hard leaves. Eucalyptus Tree

The Eucalyptus tree is an iconic feature in Australia’s landscape. It has more than 700 species and the majority are native to Australia. Eucalyptus trees come in all shapes and sizes.

The Wattle Tree is Australia’s floral emblem. It flowers in late winter and spring. They are also referred to as acacias. There are more than 850 species of wattles living in Australia and have a life span from 7 – 12 years. Sturt’s Desert Pea

Sturt’s Desert pea is a native Australian plant that only grows in west and central Australia. It is a well-known plat that is the floral emblem for South- Australia. The colours can range from red, pink and white. Kangaroo Paw

The flower opens progressively from the base up into a claw-like shape with six points – it is this shape that gives the Kangaroo Paw its name. This is one of the unique floras in Australia. Wollemi Pine

The Wollemi Pine is one the world’s oldest and rarest trees. They were discovered in 1994 in a remote valley in the Blue Mountains with under 100 trees remaining in the wild. They are conifers with dark, green foliage. Fauna

Of Australia’s diverse and plentiful fauna half of it cannot be found anywhere else in the world. Australia is the home to one of the entire subclasses of living mammals; the monotremes. Of Australia’s Fauna half are marsupials. Koala

The Koala is a large marsupial found only on the east coast of Australia. It can be recognised by its dense, woolly greyish fur, large head with large hairy ears and long sharp claws. Koalas spend most of their life in trees. They sleep most of the day and are usually solitary animals. Kangaroo

The Kangaroo is a famous Australian icon. It is a large marsupial that has a small head, large ears, strong large hind legs, and a strong muscular tail. They belong to the macropod family and of the 41 members 39 are only found in this continent, the other 2 are found in New Guinea which means they probably originated from Australia. Wallaby

The smaller version of the well-known kangaroo have almost the same appearance but in a smaller size. They unlike the kangaroo have small oval shaped ears. Kookaburra The kookaburra is a large and noisy bird that is only found on the Australian mainland. They are a type of forest kingfisher. Their natural habitat is open eucalyptus forests in Australia’s eastern and southern states. They are well known for their famous bark of ‘kook- kook-kook’. Wombat

The wombat is a nocturnal, burrowing, large marsupial. They are greyish brown and. They dig burrows that can be as long as 30 metres long. They are also closely related to koalas. They are among the world’s largest burrowers. Their compact and heavily built bodies are well suited to a life of digging and burrowing. Platypus

The platypus was thought to be a hoax ‘a duck’s bill and feet attached to a rabbits body. This is what the English scientists thought the Platypus was when they first received a specimen from Australia. It is often referred by scientists as a ‘living fossil’. Echidna

Echidnas are easily recognised by their long, beak-like snouts and the sharp spines that cover their back. It is 1 of 2 monotremes; the other is the platypus. The Short-beaked Echidna is found all over Australia and can weigh up to 16kg. Emu

The Emu is a large flightless bird. Adults weigh 30-45kg and stand 1.6-1.9 metres tall. Emus stay in herds which usually have a dominant male and female and other minor female. Dingo The ‘Australian wild dog’ is one of the few Australian mammals that are not marsupials. It is a wild dog that arrived in Australia only 2000- 4000 years ago. They have sandy or ginger coats and shite on the chest and feet but there can be colour variations. Tasmanian Devil

The Tasmanian devil is a mammal that is only found in Tasmania but there is evidence that they once roamed Australia’s mainland. The ‘Tassie Devil’ as it is commonly known hunts at night, alone for possums, wallabies and wombats. Frilled Neck Lizard

The frilled necked lizard is well known for its spectacular frill that surrounds its neck. The frill erects the frill only when it feels threatened. It is a large and powerful lizard and can run on two legs especially if surprised. 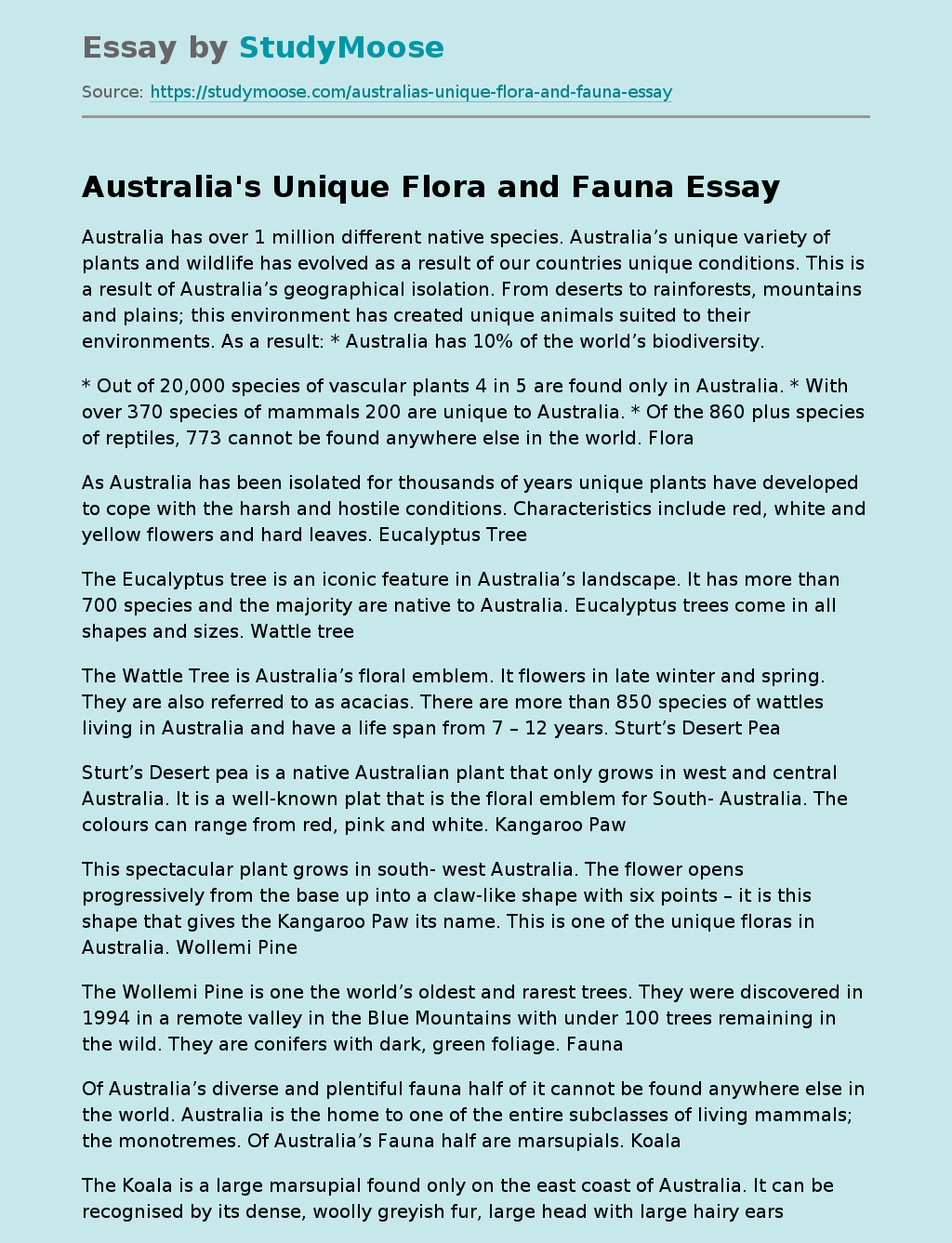