The Alliance Party, led by David Ford, is traditionally the centre party. They are very mildly unionist in that they believe the positions of Northern Ireland should remain unchanged unless the majority decide otherwise. They dislike labels of unionist and nationalist intensely and believe it only contributes to embedding sectarianism within NI institutions. Through all the momentous changes that have taken place in Northern Ireland politics and the major shifts that have occurred in party support, one thing has remained constant: the Alliance Party has continually struggled to survive, never mind make progress.

Don’t waste time
Get a verified expert to help you with Assess the reasons why the Alliance Party has always struggled in Northern Ireland politics
Hire verified expert
$35.80 for a 2-page paper

There are many reasons why this has been so.

The Alliance Party have always struggled in Northern Ireland politics, and this is partly due to the composition and workings of the assembly. Their power is often diminished in larger votes which require the majority of unionist and nationalist support. It has been very difficult to break the centrality of the border as the central issue in Northern Ireland politics.

The continuation of political violence and the memories of that violence have had a polarising effect upon politics that have created unsuitable conditions for the Alliance Party. They are on such a tight policy line in the centre of politics that little comments can have big impact. Anna Lo’s comments that her personal preference would be for a united Ireland, for example, did have an impact on the Alliance vote.

Furthermore, the existence of “moderate” parties within both the Unionist and Nationalist camps (UUP and SDLP) has meant that moderate voters in both traditions have had a choice other than a centre party.

Very few people in Northern Ireland have no opinion on the border issue. More recently, the strategic shifts in the positions of the DUP and Sinn Fein to occupy more “moderate” positions has added to the difficulties faced by the Alliance Party. This includes the recent Fresh Start Agreement of 2015. The DUP and SF committed to ending paramilitarism and tackling organised crime, and it was also decided that the Executive will be handed the power to set its own rate of corporation tax with the aim of reducing it to the 12.5% rate of the Republic. Plans for a commission to examine the thorny issues of flags, identity, culture and tradition will proceed. This proves that the ‘big two’ are becoming more co-operative and willing to compromise on big issues. In light of this, what need is there for Alliance? 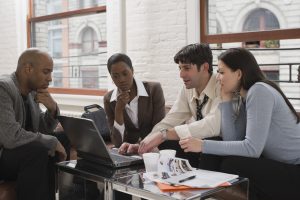 The DUP and SF have also been accused of trying to diminish the influence of Alliance. They have firstly done this by aiming to get rid of the Employment and Learning ministry – which was led by Alliance’s Stephen Farry – by combining it with Business. They portray this as a money saving strategy, but in reality it can be seen as more of a blow against Alliance. Sinn Fein and perhaps more so the DUP have been annoyed that Alliance have boosted themselves to a position where, in the previous assembly, they had two Executive seats – one chosen by Cross Community Vote of course – they think this is unfair and have therefore aimed to cut a Ministry. They may also have cynically taken issue with Alliance over the flags issue. This move clearly shows a sense of dominance of the two big parties that has led to Alliance’s struggle for relevance.

Alliance faced many issues over the flag flying fiasco which erupted in 2013 after Belfast City hall voted to fly the Union flag only on selected days. This was supported and carried by Alliance. The unionist backlash, particularly among working class communities was severe with millions of pounds of damage due to rioting and violence. Alliance suffered electorally from this. Previous unionist voters who may have voted Alliance (and perhaps propelled Naomi Long to her Westminster seat) may think carefully next time about who they vote for – if at all. This could have been a contributing factor to Naomi Long losing her Westminster seat.

Another reason why Alliance has struggled is that it has been pulling out of key positions. In 2016 they refused the post of Justice Minister and they have voiced their concern in the lack of any progress in the SHARED FUTURE agenda. This aimed at bringing down barriers across NI and encouraging much more integrated learning and culture through schools, but Alliance argued the strategy was half hearted and going nowhere and pulled out of the group. If Alliance keep pulling out of things, they will need to work hard to prove to their voters that they still have an important role in the assembly.

Finally, Alliance has always struggled due to electoral apathy. In 2016 the turnout was only 54%. Many of those who do not vote either have a moderate political opinion or no opinion at all – it is these people that Alliance need to convince to get out and vote for them.

On the other hand, it could be argued that the Alliance party has been quite successful. The Party has survived which, in itself, is an achievement when so many other moderate parties have disappeared, such as the Women’s Coalition.

The Alliance party was crucial during the negotiation of the GFA. It achieved 6.5% of the vote in 1998 allowing it 6 seats. Its leader in 1998, Lord Alderdice, was appointed 1st Speaker of the Assembly and the party has also acted as ‘KINGMAKER’ in 2001 electing David Trimble as FM and Mark Durkan as DFM. This gave it publicity. The GFA negotiations would not have gone so smoothly if there was no centre party.

Their relative electoral success proves that they are not struggling. The party fared well at the 2007 Northern Ireland Assembly election winning seven seats, including a seat won by Anna Lo, the first Chinese person to be elected to a European legislature. She has received an MBE for her community work. The slight increase in their vote between then and now, increasing up to 8 MLAs, proves that their non-divisive approach is becoming more popular. It remains to be seen whether it can break through the important 10% barrier and truly challenge the DUP and Sinn Fein.

In 2010 the party won their first Westminster seat with Naomi Long of East Belfast who managed to unseat Peter Robinson, leader of the DUP and First Minister! This was a major achievement but many would claim that this was more of a protest vote against Peter Robinson due to the various personal scandals he was involved in as opposed to a positive vote for Alliance.

The Alliance Party appeals to a wide range of people and are supporting a number of openly gay spokespeople. They support diversity and are said to be the ‘bridge’ between the Catholic and Protestant communities, as well as reaching out to sections of society such as the Asian and Jewish communities where the majority are not associated with nationalist and unionist concepts. As Northern Irish society becomes more increasingly diverse Alliance’s votes could rise.

The fact that David Ford was given Minister for Justice when it was devolved in 2010 shows the importance of Alliance as a centre party. He was elected by cross-community vote. Such a controversial post could not have gone to either the DUP or Sinn Fein because they are too hardline. This gave the Alliance party more credibility as it proved that it was up for such an important role. Ford was instrumental in reforming Northern Ireland’s prison system, including a refresh of personnel, reform of the regime within prisons, delivery of new education, training and employment services to prisoners, and redevelopment of the prison estate. He also ended the detention of under 18year olds in adult prisons.

The Party has also had a significant effect upon policy debates within Northern Ireland on education and human rights. Starting with human rights, when it comes to the issue of abortion Alliance allows elected representatives a free vote on the issue. Anna Lo, the Euro candidate, supports a woman’s right to choose. This could take votes from the DUP, who are strictly anti-abortion. They have also included support for gay marriage in their 2016 election promises. Their liberal stance on human rights issues could benefit Alliance in the future as the younger generation becomes old enough to vote, because they are more likely to vote based on social issues rather than border issues.

Read about diversity and ethics in the workplace

As for education, Alliance has had a significant effect on the implementation of integrated education. The strive for 20% of children to go to integrated schools and 40% to go to shared schools by 2020.

Finally, Alliance has proved itself to be highly successful in their representative role through their use of surgeries. A good example of a surgery was in 2009 when South Belfast Alliance Anna Lo MLA held a special constituency surgery on to highlight the important role of older people in our community. It was held in her constituency office and along with representatives from Age Concern, Help the Aged, Engage with Age, the Age Sector Platform and Access 2 Benefits. This surgery was designed to enable older people to voice their views and seek assistance on a wide range of issues. Many older people do not claim all the benefits that they are entitled to, and we hope that by raising awareness we will help alleviate this problem.

To conclude, the future of the Alliance party is uncertain. They remain a positive force but they do not provide a legitimate challenge to the domination of DUP and Sinn Fein. Realistically, in a country as segregated as Northern Ireland a centre party is never going to do that well.

Assess the reasons why the Alliance Party has always struggled in Northern Ireland politics. (2020, Jun 01). Retrieved from http://studymoose.com/assess-reasons-alliance-party-always-struggled-northern-ireland-politics-new-essay

Related Essays
Don’t waste time
Get a verified expert to help you with Assess the reasons why the Alliance Party has always struggled in Northern Ireland politics
Hire verified expert
$35.80 for a 2-page paper
Stay Safe, Stay Original