Aspects of Religion in Sir Gawain and The Green Knight

In any story in British literature, there is always some sort of aspect of religion featured in the story. Sometimes you have to use your imagination to figure it out and dig deep into the story and sometimes it is easy to figure out. Sir Gawain and The Green Knight is one of those tales.

To begin, in the tale you read about well-defined behavior. The code of Chivalry in particular. The ideals of chivalry begin with the Christian concept of morality.

Don't use plagiarized sources. Get your custom essay on
“ Aspects of Religion in Sir Gawain and The Green Knight ”
Get custom paper
NEW! smart matching with writer

The Christian morality and also the knightly chivalry are formed together in the shield of Gawain. The pentangle represents the five virtues of knights which are friendship, generosity, chastity, and piety. Gawain is tested throughout this whole poem.

One Christian action that happened in the poem is when Gawain prayed, and he suddenly comes upon Bertilaks castle. Part of the ritual of Christianity is the confession of sins, and in Sir Gawain and The Green Knight, it is shown in the ending of the poem.

While at Bertilaks castle his wife attempts to seduce Gawain. For three nights she comes to his room and every knight he only grants her a kiss, only because of his knightly loyalty to god and the Bertilak to not disrespect her. However, on this third knight, she gives him a gift and offers him her magical green girdle. Gawain accepts the gift, but it does contradict both his faith and his loyalties. This scene shows how he’s stepping away from gods faith but stepping toward supernatural forces. Any separation from that results in punishment. Back to confessing, he confesses to having the green girdle but also still keeps it. This shows Gawain disrespecting the Christian belief and that is a sin. When it becomes time for the green knight to return the blow and it took him three tries. On the third try, he scarred Gawain but did not chop off his head. Have you noticed most of these events are happening in threes? The times Gawain is tempted by the lady and he is fallen into the temptation. The hints are taken place on three different days. The Green Knights swing at Gawain three times. I believe there is a significance between all these events, and I believe it’s that Christianity teaches the trilogy. The father, son, and the holy ghost.

Lastly, let’s compare Adam and Eve to Gawain. Gawain is asking the Green Knight his name and the reason for that is to show respect for him. When it comes to the Christian concept it would be just liked, Adam and Eve. They had no clue they were naked until the apple had been eaten. Then at that point, they asked why they were naked and from then on, they felt the shame of what they did. It was also the same for Gawain and how he felt the shame for his actions.

The green girdle is asked to be worn to represent their sins. This can be related to the cross and the cross is recognized as a symbol of our sins that Jesus died for.

In conclusion, I feel as if the author used this story to teach Christianity. The reason I feel this way is because of the many events that are shown in this story.

Aspects of Religion in Sir Gawain and The Green Knight. (2020, Sep 15). Retrieved from https://studymoose.com/aspects-of-religion-in-sir-gawain-and-the-green-knight-essay 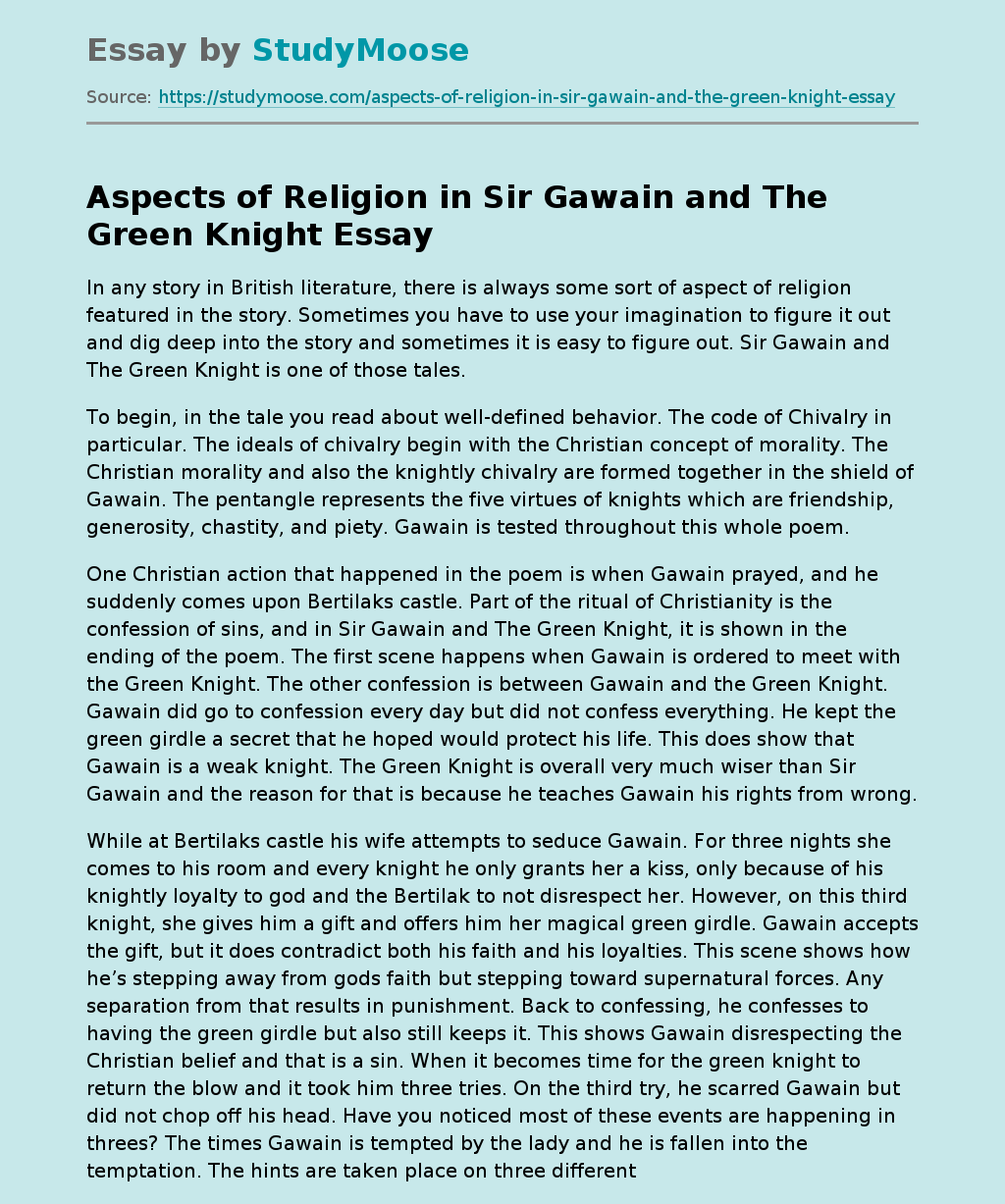