Are Violent Media Beneficial for Children

The author is successful in achieving his purpose of how violent media is not always dangerous or negative but rather can be positively beneficial. Gerard Jones uses ethos, pathos, and logos to support his perspective on violent media.

To begin with, Jones uses ethos by including his son’s anecdote and what he did to overcome the obstacles he had in school. Through his first few years of school for him, Jones’ son pretended he was different types of superheroes, villains and inspiring cartoon characters.

Don't use plagiarized sources. Get your custom essay on
“ Are Violent Media Beneficial for Children ”
Get custom paper
NEW! smart matching with writer

Masking himself and acting like the ones he idolized helped Jones’ son to get over the fears he had inside of him. Jones doesn’t just involve his son but he also brought in Dr. Melanie Moore. She is a psychologist with a PhD who works with teenagers. Moore states, “Children need violent entertainment in order to explore the inescapable feelings that they’ve been taught to deny, and to reintegrate those feelings into a more whole, more complex, more resilient selfhood.

” (2). What Moore had said just exemplifies how violent media can be turned to be used as something great for children. Jones and Dr. Moore happened to work on a three-year project regarding this topic. This project was a big leap forward for Jones to prove how violence in media shouldn’t necessarily be a bad thing to show to your kids.

In addition to ethos, Jones also applies the use of pathos in his stance by introducing his story as a professional comic book writer.

He explains how violence in media allowed him to follow a character when he was young. The Hulk was his main inspiration to become a writer and later on produced comic books and scripts for action movies. In the article it states, “I followed him to new friends other sensitive geeks chasing their own inner brutes and I followed him to the arrogant, self-exposing, self-assertive, superheroic decision to become a writer.” What Jones said showed that kids can use violent media as an outlet to explore the feelings that are trapped in them. By telling his own experience as well as his son’s experience, this lets the audience to be engaged with the author and his writing. Jones realized that in order to reach out to his audience, he needed to write something that would bring them to an exposed state. This way, he gets to be in touch and connected to the audience’s feelings. Most parents teach their children to hide these avoidable feelings but instead should allow their children to better understand who they are. Jones hoped that by showing the vulnerable side of himself to his audience, it will help persuade them with the fact that violent media is a great source.

Subsequently, Jones utilizes logos to accommodate his opinion on media violence. He did this by including young children and their experiences. Jones had worked with a little girl, Emily, who had very violent fantasies that concerned other parents. Emily would write stories comprised of people being stabbed with knives and reenact fight scenes portrayed by a character on the playground. The adults would try to calm her down and try to change the idea of her stories, but she would just rebel and act more like her “angry heroes” (Jones 2). Jones and Emily’s mother had helped turn her stories into comics. This brought Emily more joy seeing what could come out the ideas in her head. By drawing and writing down her creative fantasies, she was more self-controlled within her peers. However, one aspect Jones could have included to support his statement more was the use of statistics. Jones did add in several children’s stories, but not enough to really persuade all of his readers. If he did put in some percentages of how many kids struggle with this or how many became a socially better person, he could have accumulated a larger audience who would agree with his point.

In conclusion, Gerard Jones accomplished in attaining his purpose of how violent media can be a good thing for your children. He did an acceptable job of swaying his audience. He convinced them that violence in the media is capable of being used to fight against the hard problems children may find in life.

Are Violent Media Beneficial for Children. (2019, Dec 13). Retrieved from https://studymoose.com/are-violent-media-beneficial-for-children-essay 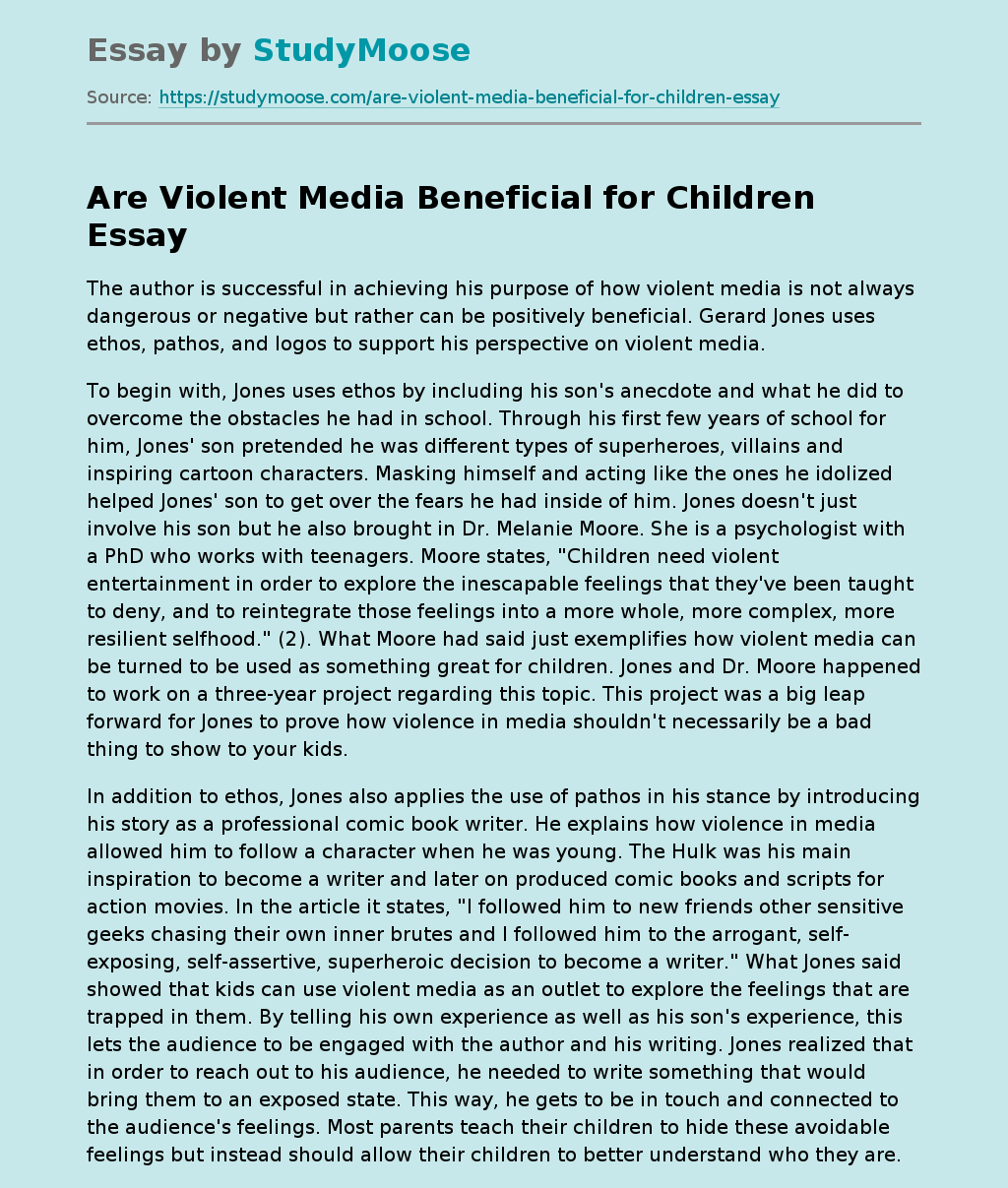