It is well known that Arabic is the 5th most spoken language in the world. In the world there are many languages are spoken and become popular among the people. Among those languages Khaliji is an Arabic language. This is also called Gulf Arabic. It is widely spoken in Kuwait. The meaning of this language is gulf word. Khaliji Arabic has the influence of various languages in the Arab world. It is not only spoken in Kuwait but also in eastern Saudi Arabia, Qatar, Bahrain, Iraq and part of Oman.

Don't use plagiarized sources. Get your custom essay on
“ Arabic Dialect ”
Get custom paper
NEW! smart matching with writer

It is also known by the name Khaliji in Kuwait. Khaliji Arabic is spoken by around 500,000 people in Kuwait.

It is an official language in Kuwait. 90% of the populations in this country speak this language in this nation and mostly the speakers are Muslims. In additional many languages are spoken in Kuwait like Urdu, Persian and Hindi. Many foreigners come here for job purposes from different parts of the countries and they settle down in Kuwait.

The dialect that is used is known as Kuwaiti Hadari Arabic. There are some different characteristics of the Kuwait Language for example Gulf Arabic which makes it different from the other Bedouin dialects.

The most important characteristic feature is the presence of very few Persian words in the language. Additionally, many people who have grown up in Kuwait are fluent in mirati/Khaleeji Arabic. These are Egyptian Arabic, Maghreb Arabic, Andalusi Arabic, Sudanese Arabic and many more. There are 28 letters in the Arabic alphabet. Quietly the English writing system are different from the Arabic writing system.

Some Arabic alphabet is giving below. Here is details information about khaliji Language and dialects with comparisons with the other country in the Gulf area.

A detailed list is providing the analyzing the sound and record pronunciation and their differences in different dialects. We have touched all sections like sound system, grammar, syntax/word order,lexis (vocabulary) & semantics, pragmatics (idiomatic expressions, contextual uses etc Discussion Arabic is the national language in most of Islamic nations. This language is broadly spoken in Kuwait as a native language. Arabic language is also an official United Nations’ language, the African Union and the Arab League. Arabic is very important language in the Muslim world.

The Holy Quran is written in Arabic script. Therefore, it is very important to teach and learn Arabic in educational institutions and universities in the world. Muslims recite the Quran in Arabic language. In Kuwait Arabic is mother language and all kinds of religious activities are held in Arabic language. The local people who live in far flung area. They speak Khaliji Arabic. There is also modern version of Arabic in the Arab world is more understandable. However conversational languages are still broadly used in regional talks and they are simply different from the standard official version of the language.

Many old dialects are still in practices in the Gulf countries. The different dialects are influenced mostly which were previously spoken in the region. There were many dialects and language derivatives spoken in the Gulf world like Egyptian Arabic, Maghrebi Arabic, Algeria Arabic, Levantine Arabic, Iraqi Arabic, Gulf Arabic Hassaniya Arabic, Najdi Arabic, Hijazi Arabic Andalusi Arabic, Siculo Arabic and so on. It was the 6th century when the holy book the Quran was written and since then its means the inception of Islam Arabic language become the official language in the Gulf world.

Arabic language has contributed in the field of art and literature. Thus booming age started cultural enrichment in the field of Science, art and writing of all sots. It is little true that Arabic language looks difficult. Arabic script is not very difficult to translate. In Arabic language most words are pronounced as they are spelled and there are not nay combination of vowels and consonants. It means each little produces separate sounds. Arabic is written from right to left as a result what most people regard as the back of a book will be the front in case of one written in Arabic.

The Arabic script is always joined or cursive and there aren’t any capital letters. However, slight modifications are made in joining the letters and there are a few letters that do not join to a proceeding letter. Arabic script has 28 letters in the alphabet out of which there are three vowels. The letters ‘p’ and ‘v’ from the English alphabets do not have Arabic counterparts and in foreign words that contain these letters and are spelt in Arabic, they are replaced with a baa’ and a , faa The standard pronunciation of the language is the one used to recite the Quran.

However, every region has its own colloquial variation. The letters can have a long pronunciation as well as a short pronunciation. The difference is specified by special markings when writing. These are known as ‘harkaa. These are main four branches in Arabic language like the first is lexicon. It explains about the vocabulary of the language. This is known Al- Lugah. The second is determines. It is the form of the individual word. It is called (Morphology) At-Ta-Rif’. The third is concerned itself with the order of the words and syntax that is an agglomeration of several dialects.

This is known as ‘An-Na-w’ (syntax). The last is known as Al-Istiqaq’ (derivation). This deals with the origin of the words. A Glance of the Arabic Language: The Arabic language is spoken in more than 20 countries in the world Arabic is the official language throughout in the Arab world and its written form is relatively dependable across national boundaries. Arabic language is used in official documents, educational settings and for communication between Arabs of different nationalities. However, the spoken forms of Arabic differ broadly and each Arab country has its own dialect.

Dialects are spoken in most informal settings such as at home with friends or while shopping. Among all the spoken dialects, Egyptian Arabic is the most easily understood due primarily to Egypt’s role as the major producer of movies and TV programs in the Arab world. Arabic Vocabulary: Today, there are many Arabic words can be found in some European languages such as Italian and Spanish, due to periods of Arab sovereignty in those countries. Theses are English words of Arabic origin include Algebra, Alcohol, Mosque, Tariff, Alcove, Magazine, Elixir, Sultan and Cotton.

Arabic Grammar: Learning Modern Standard Arabic can be a challenge. The sound system is completely different from Germanic and Romance languages. Arabic pronunciation includes a variety of distinctive guttural sounds that are formed in a different way than most sounds in European languages. Arabic grammar, however, is relatively straightforward. There are only two verb tenses, and verbs are regular in conjugation. There are cases for nouns, but only three: nominative, genitive, and accusative.

These simpler aspects of the language compensate for some of the difficulties non-native speakers may experience when learning Arabic pronunciation and reading. The Arabic Alphabet: There are 28 letters in the Arabic alphabet that change shape depending on their position within a word and the letters by which they are surrounded. Some Arabic letters must be connected to other letters and others may stand alone. Arabic vowels are indicated by marks above and below the consonants but in texts such as newspapers and magazines, these marks are often omitted.

Additionally, there are no special forms, such as the use of capital letters in English, to indicate proper nouns or the beginning of a sentence. A good way to begin learning Arabic is by learning the Arabic alphabet and the rules that govern spelling. After all, Arabic writing is more than just a system of communication; it is considered to be an art form. It has never been easier to learn Arabic than with the Arabic software programs and Arabic audio products available from Transparent Language. We wish you the best of luck as you begin to speak Arabic. 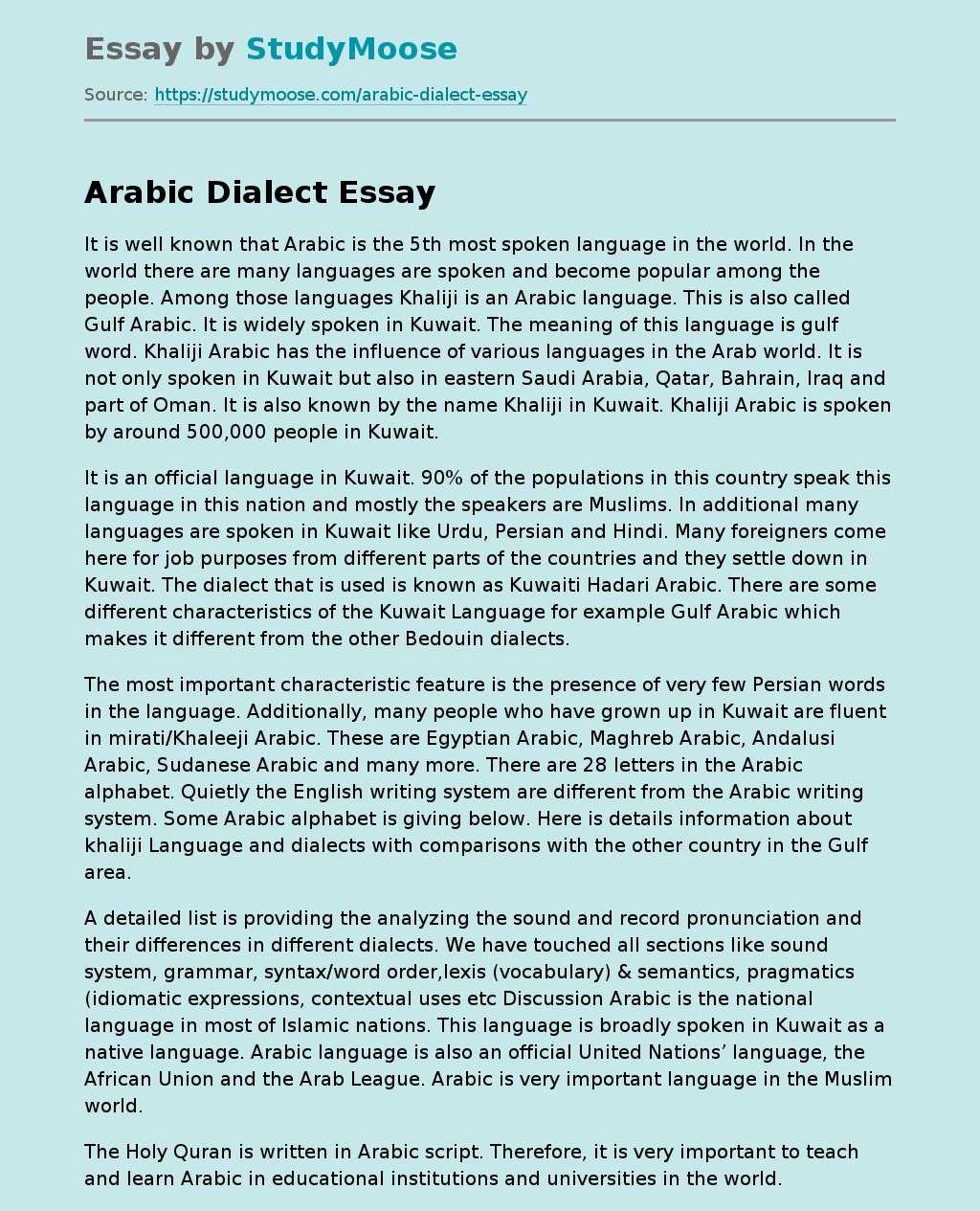