Animals Should Not Be Used for Medical Testing

Tina Date: 11/29/2011 Animals should not Be Used for Medical Testing Nowadays, animals are used for medical testing which is hurtful and not necessary. Tens of millions of animals are used each year in federally and privately funded experiments. Do animals feel the same pain that human feel? How do we know that other humans feel pain? We all know that we ourselves can feel pain. We know this from the direct experience of stubbing toe on a chair, or having finger slammed in a drawer.

Don't use plagiarized sources. Get your custom essay on
“ Animals Should Not Be Used for Medical Testing ”
Get custom paper
NEW! smart matching with writer

So animals are as same as human. They have feelings about hurt, happiness, and pain either.

Therefore, animals should not be used for medical testing because animals have the rights to survive, not a prey for vivisection in laboratories, and there are still having so many ineffective of drugs in the world. Pain is a physical event; something that cannot be observed. Pain is something that is felt, and we can only assume that other humans can feel pain from external indications such crying, screaming, or jerking away from something.

If we can justify that other humans feel pain, why do human think that animals do not feel pain by continue using animals for testing?

Considering that all living beings possess natural rights that any animals with a nervous system have specific rights to survive in the world. All animals are born equal and they have the same rights as human to existence in this planet. Why do not human save animals instead of killing them by many unnecessary testing? When an animal is poked, burned, or stepped on, they will cry, yelp, or jerk away.

Since the external indicators are the same, we can assume that animals feel the same pain that we as humans feel. Today the medical term “vivisection” is used.

Vivisection is defined as “cutting while still alive”; it is more commonly used today that is performed on animals especially. Charles River Breeding Laboratories, a company owned by Bausch and Lomb, provides 40-50% of the animals used in experiments of laboratories (Mercy For Animals). Medicine testing on animals is inaccurate and does not benefit humans at all. Every single day in a year, animals including, but not limited to, dogs, cats, rabbits, mice, rats, hamsters, rhesus monkeys, and cattle are commonly used for vivisection. Animals are innocent!

They are organisms that have the rights to existence and to be respected by humans. They are not prey for vivisection in the laboratories. Vivisection is unethical. Furthermore, testing on animals is unreliable. Human rarely think about the opposite side of their experiments. New drugs can pass safety on animals but this does not mean that human can use these drugs safely because animals and humans do not get the same diseases. Animals’ cells are so different from humans’ cells. For example, Opren drug caused 3500 people to suffer serious side effects including damage to skin, eyes, liver, and kidneys (Tachell).

Thalidomide caused about 10,000 birth defects worldwide (CAAT), and Clioquinol caused 30,000 cases of blindness and paralysis and thousands of death (CAAT). Conversely, many drugs that are beneficial to humans are dangerous to animals. Penicillin, which is an antibiotic to humans, kills guinea pigs. Aspirin causes birth defects in rats, mice, monkeys, but it does not harm in humans any way. In the last 15-20 years, it has been estimated that animal testing has decreased 30-50% due to the reduction and replacement techniques (Tachell).

The most common alternatives that are used today are: in-vitro tests, computer software, and even human “clinical tests. ” Human have to understand that this planet is not only ours, but the animals as well. Albert Einstein once said, “Our task must be free ourselves…By widening our circle of comparison to embrace all living creatures and the whole of nature in its beauty. ” (CAAT) The means of living a healthy and fulfilled life is to embrace and respect all life on this planet. The animals cannot tell the scientist that they do not want to be tested on, but we can.

Animals Should Not Be Used for Medical Testing. (2018, Nov 03). Retrieved from https://studymoose.com/animals-should-not-be-used-for-medical-testing-essay 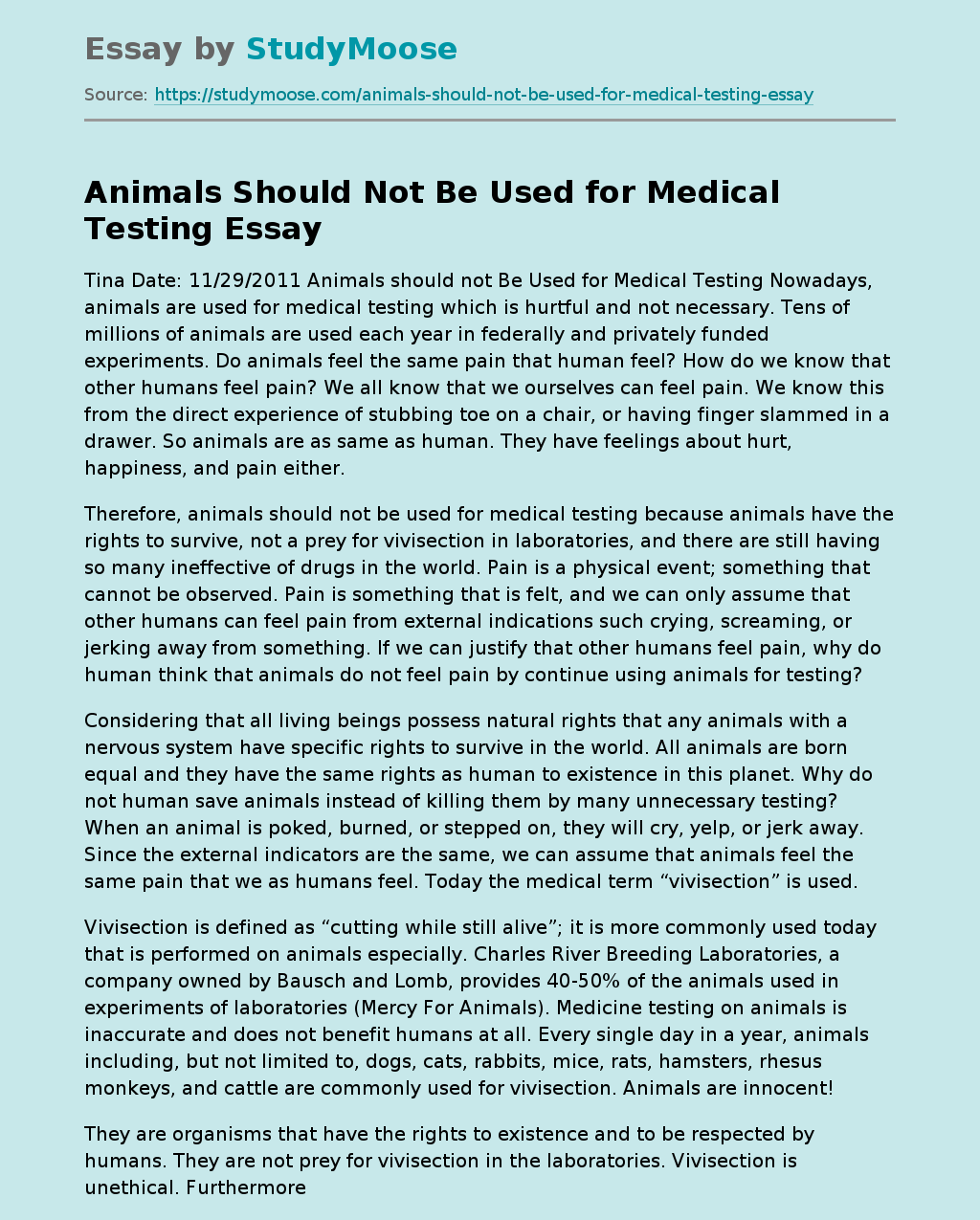