The poem “Tich Miller” by Wendy Cope is about two schoolgirls named Tich Miller and Tubby. Tubby is explaining different incidents that she experienced in her youth, which caused quite some trauma for her and Tich Miller. We don’t know the gender of Tubby but I am assuming that Tubby is a girl. Tubby is telling us about how Tich and she always were the last persons to be picked for outdoor games.

When the team had to pick players the last person to be picked was always Tich who stood back and was not picked.

Don't use plagiarized sources. Get your custom essay on
“ Analysis of Tich Miller ”
Get custom paper
NEW! smart matching with writer

Tubby says that it was because she was, “the lesser dud”, when the teams had to take them in consideration. It is my impression that Tubby and Tich are almost equal if you look at their social status but Tubby is just a tiny bit more “cool” and therefore she gets picked before Tich.

In the first stanza of the poem there is a small characterisation of Tich Miller.

It only says that she wears glasses and had one foot three sizes larger than the other. Tich is described as a very shy and clumsy child and therefore she as described stood behind, unnoticed or disregarded, when they picked teams for outdoor games. I think the incident that she is describing completely altered the course of her life. It affected her self-consciousness throughout the rest of her life.

Tubby seems quite clever and knows that she needs to adapt for getting through the bullying.

She can take criticism, which Tich cannot. It does not seem like Tubby and Tich are very good friends. The poem states that they are not making any eye contact nor are they talking to each other. I would expect them to stand together when they are getting bullied but actually the opposite happens. They are avoiding each other and that appears to be a bad decision for both of them. You could imagine that Tubby is chubby and therefore the name. She is being treated like Tich unnoticed and overlooked.

Both of them are having a hard time in school. They do not fit in like the other kids. I think that they, due to having been through some traumatising situations have developed some kind of social awkwardness. None of them want to step forward and contradict the bullies. I took notice of the sentence “affecting interest in the flight of some fortunate bird”.

Especially the use of the word “fortunate” grabbed my mind. Both of them probably want to be the bird. Be able to just fly away from everything and get to a new place where they can develop a better life. It is my understanding the names in this story, Tubby and Tich, have not been chosen randomly. I think that it could be like Chubby and Tiny if you described them. . The two girls were unselected only because Tubby was chubby, and Tich was tiny, hideous and wore glasses.

The last stanza is the turning point of this poem. It is the sentence that makes you think about what the poem really wants to say. It makes you feel frustrated and sad at the same time. When you read the last stanza the sentence, “Tich is dead”, the first thing that comes to your mind is of course suicide. You can tell that the change of school when they turned 11 years old had two different outcomes for the girls. While Tich probably committed suicide, Tubby stepped up and actually started being a bully. She becomes one of bad guys and start bullying the hockey players who cannot read. All the hatred that developed when she was younger was pointed at other kids now. It was terrible for both of these young girls. They wanted to move on when they went to different schools but none of them succeeded. I think it is tragic that no parents or teachers stepped in and tried to stop it earlier. While I think suicide is the most egoistic thing person can do I still believe people should be allowed to do whatever they please, so long as it doesn’t infringe on another persons right to do what they want. When you think about it your life is the only thing you really own.

There are different themes this poem touches on. First and foremost the topic growing up comes to my mind. The poem is about two girls and their experiences trough their childhood. Another topic could be suicide. You could ask the question, “Why does Tich Miller die at the age of twelve?” The poem doesn’t reveal this but part of the message of the poem could be that bullying can have serious consequences. So serious that it can lead to people losing the will to live and therefore taking their own lives.

The last message I could think of was hierarchy. Every school has its hierarchy. Some people are popular and some are not. The poem Tich Miller gives an insight into the world of the less fortunate namely a view of the least popular and how they try to survive every day of school. Even Tubby who is at the bottom of the hierarchy knows that Tich is even lower than her and that she therefore should avoid her. Being associated with a “loser” such as Tich will make her even more unpopular and move her further down the hierarchy.

If I were to compare it to another poem it would be “Clara’s Day”. It is as well about an insecure teenager and how she feels growing up. Going through the same problems as these young girls. 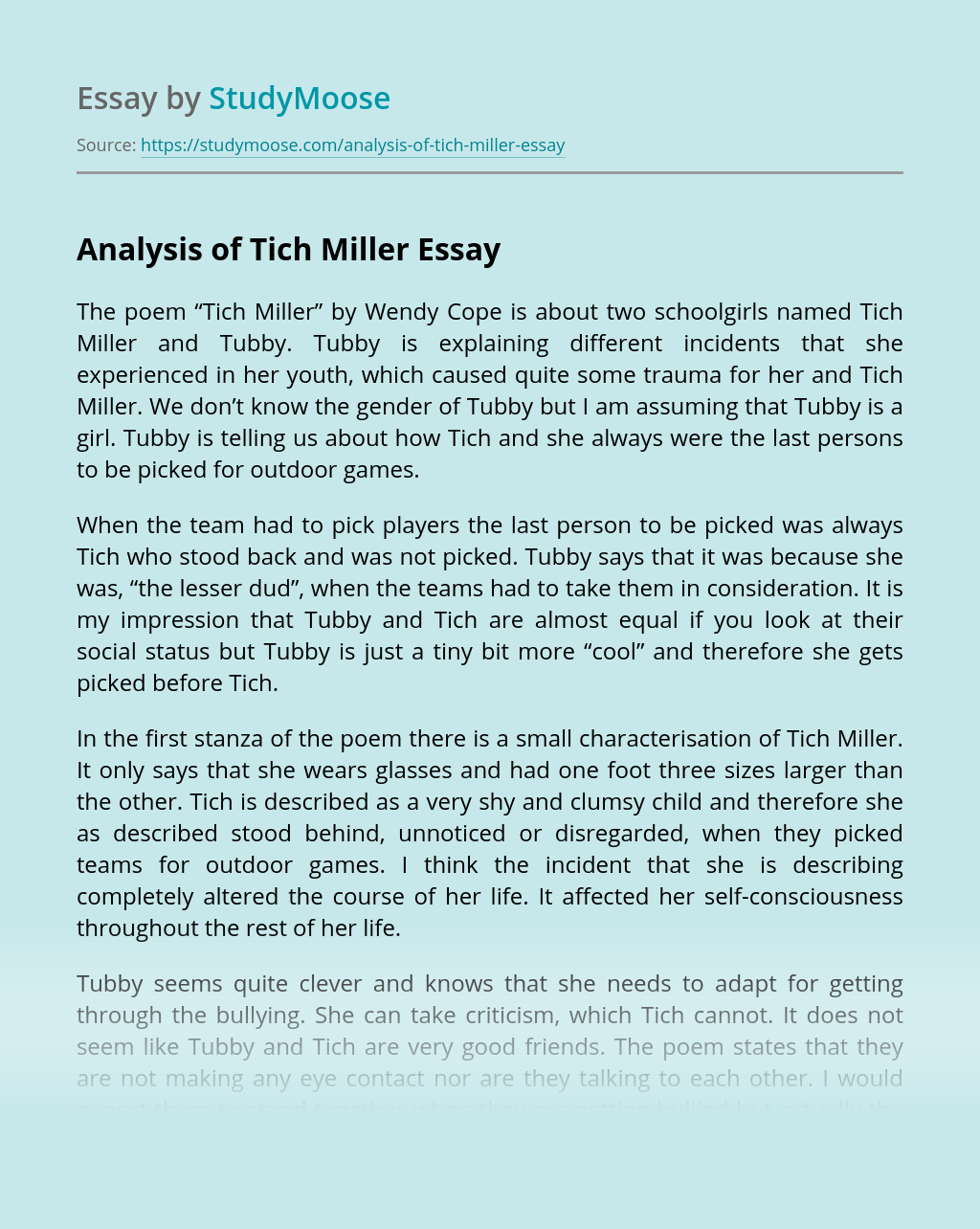