Analysis of the Movie "Jose Rizal"

A three-hour epic on the life and struggles of poet and patriot Jose Rizal, the national hero and martyr of the Philippines, this film was commissioned to mark the 1998 centennial of the country’s independence from Spanish colonial rule. Rizal was a remarkably educated man; not only was he a writer, but he was also a painter, sculptor, doctor and surgeon, teacher, natural scientist, economist, engineer and theologian. He was an excellent fencer and marksman; he studied at colleges in Europe, America and Asia, traveled to many different nations and could speak twenty-two languages.

Don't use plagiarized sources.
Get Your Custom Essay on Analysis of the Movie “Jose Rizal” Just from $13,9/Page

He was a champion of his country’s independence, a Filipino Gandhi who faced the firing squad at the age of thirty-five for inciting rebellion. He was the instigator of the Philippine revolution of 1896-98, the first national uprising against a colonial power in Asia. He also wrote two books, Noli me tangere and El Filibusterismo, which sought to increase his people’s political awareness.

The Rizal of her story Cesar Montano is thinking back on his life and writings from his prison cell in the fortress of Santiago; the characters that appear are a blend of the real people, friends and enemies as well as those he created in his books. The script is solid, with a contribution by Diaz-Abaya’s long time collaborator, Ricky Lee; the soft tones of the cinematography helps to create an atmosphere of magic appropriate to the story of a legendary hero, and the acting by Cesar Montano is quite remarkable. The movie begins in 1891 with Jose Rizal, played by Cesar Montano, as an established author and linguist who speaks more than 20 languages. He vows to write about the sufferings of the Filipino people under the tyranny of Spanish rule, and about their abuse by corrupt priests. Rizal’s writings galvanize the Filipino people but earn the scorn of the Spanish government, which vows to crush the rebellion of the Filipinos.

The Spanish military capture and torture Jose’s brother Paciano, played by Pen Medina, to determine Jose’s role in the rebellion. During a flashback, Jose says Paciano greatly influenced him by exposing him to the injustice going on in the Philippines. Paciano is released after his interrogation and returns to Manila, where the family plans to go on the run. An order is given to arrest Jose Rizal on sight.

The movie cuts back to Jose’s childhood, when he was called Pepe. When he is a child, his mother is falsely arrested for attempted murder and jailed for two years. He gets attention from educators early on for his intelligence and writing prowess. As a young man, he criticizes a college professor for stating that Spaniards are superior to Filipinos. Filipino students start fighting Spanish students after Jose starts raising the issue of Filipino independence. Cutting back to 1896, Jose is captured and put on trial, and his books are banned.

The film then cuts back and forth between Jose’s rise as a revolutionary and his fall from grace during his trial. As a student, Rizal spent significant time in Madrid but then became disgusted with Spain’s occupation of Filipino land and Spanish treatment of Filipino citizens. The mayor of Madrid is arrested and discredited for having a Rizal book. A violent revolt breaks out in 1896, which Jose does not support because he sees it as mass suicide. Going back to the trial, enormous pressure is put upon Jose’s defense attorneys, with critics branding them as traitors for defending the rebel.

It is revealed in a flashback that Jose had fathered a child that had died soon after birth, adding to his inner turmoil as he buried his only son. In the trial, his books are examined and criticized for their pro-Filipino stance against Spanish imperialists. He is found guilty of staging a rebellion through his speaking and writing, and he’s condemned to death by firing squad. He sneaks a poem to his family before his execution, and he yells “It is done!” A full-blown rebellion is soon under way. Two years later, in 1898, the Filipino flag is lifted triumphantly as the citizens celebrate their independence.

Analysis of the Movie “Jose Rizal”. (2017, Feb 02). Retrieved from https://studymoose.com/analysis-of-the-movie-jose-rizal-essay 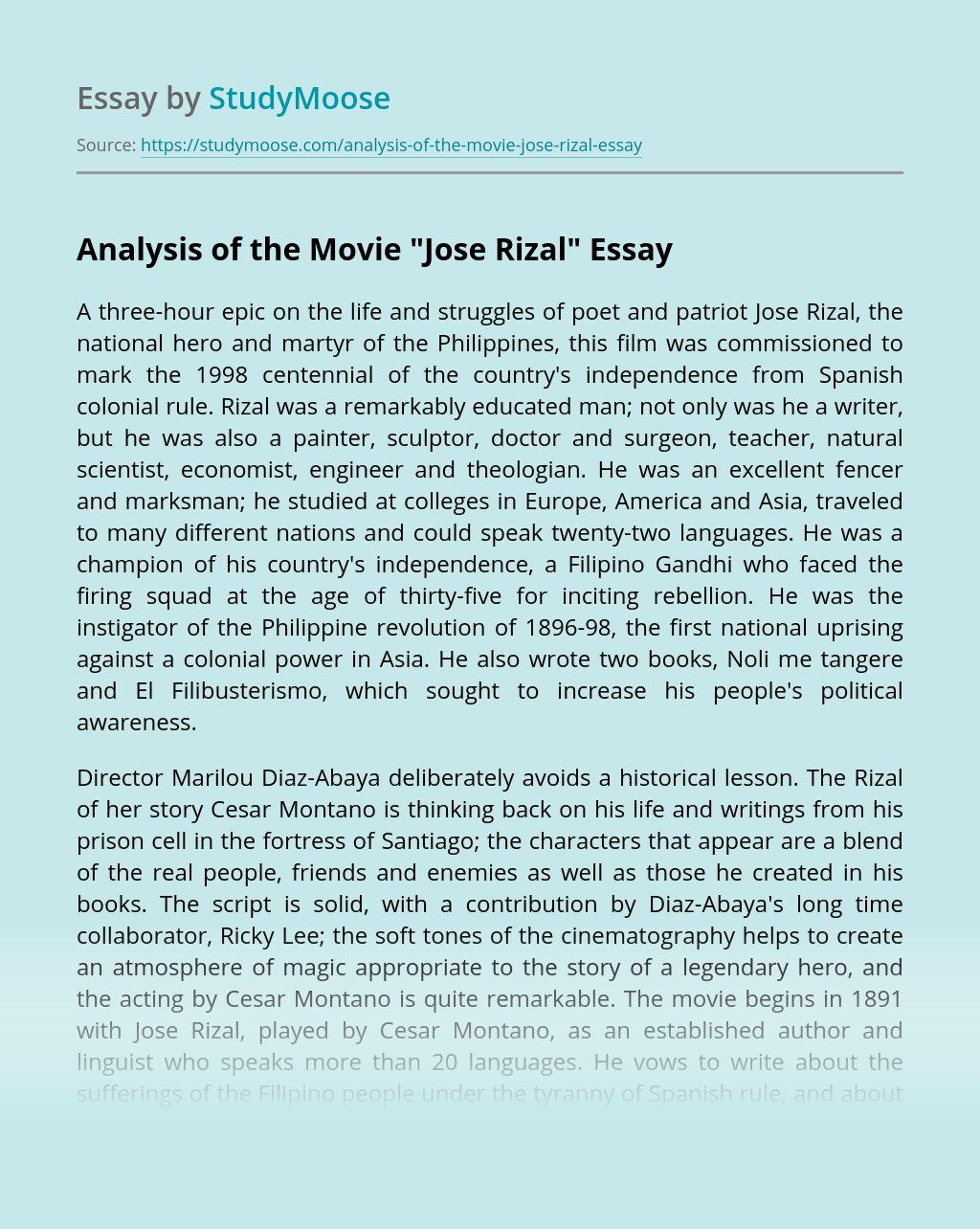 1. Question : Reporter: A new campaign finance reform bill being considered by Congress would limit the amount of campaign contributions that political candidates can receive. However, a survey of candidates running for mayor, governor, and senate seats shows that not one of them favors the bill. Clearly, there is no desire among politicians to...

It is natural that God made some people naturally beautiful than others in face, color, body and in physical appearance but this is only the outer beauty that can attract anyone by its features while Inner beauty is some thing inside a person or a body, most of the times it does not show up...

A review of the Austrian superstar, Arnold Schwarzenegger, illustrating his world-wide success. Arnold Schwarzenegger His gap-toothed grin is one of the most recognized in the United States and the world. Broad shoulders on top of an abnormally muscular torso with legs of steel are also trademarks of the man. For most people, the sight of...

In his short story, “The Open Boat,” Stephen Crane shows how an inanimate object can be very unconcerned with whether you live or die. In this case, it is an ocean, which man has to struggle to survive. The characters in the story come face to face with this natural disaster and nearly overcome by...

The desperate need to be moral within society contributes to the motivations, choices, and actions made by people everyday.  It is society which defines what morality is and applies the necessary pressure to force individuals to conform.  Often, failing under these societal pressures, individuals are forced to use deception to escape the oppressive nature of...