Spring offensive; by Wilfred Owens focuses on the uselessness for war. There is a striking contrast between the first and last few stanzas, as in the beginning all is calm, slow and pleasant. From the 5th stanza onwards, there is a sudden change from the serene environment, to an outbreak of activity.

The poem starts off with peace and tranquility. ‘Lying easy, were at ease and finding comfortable chests and knees, Carelessly slept.’ However even this early in the passage the last two lines connote the violence which is yet to come.

Don't use plagiarized sources.
Get Your Custom Essay on Analysis of Spring offensive Just from $13,9/Page

‘To face the stark, blank sky beyond the ridge, knowing their feet had come to the end of the world.’ The sky being described as blank, suggests that there is nothing good lying ahead of them and when ‘feet’ is used in the passage it implies that it is their feet that keeps them walking on ahead. It shows their reluctance, that, if given a choice, they wouldn’t be taking this path.

The 2nd stanza describes the kindness of nature to the soldiers. It soothes their pain and the breeze makes them relaxed. ‘by the may breeze, murmurous with wasp and midge, for summer oozed into their veins, like an injected drug for their bodies’ pains’ Bodies’ pains connotes that they have already been fighting at another front. It is an introduction to the next two lines of the poem, which like the previous stanza are warning about the imminent war. ‘sharp on their souls hung the imminent line of grass, fearfully flashed the sky’s mysterious glass’ The imminent line of grass behind described is the battle field and the sky flashing, gives a warning for what is about to happen.

As a continuation of the 2nd stanza, the 3rd stanza, also describes nature, as being on their side. ‘where the buttercup Had blessed with their gold’ However, there is increased warning. The brambles are portrayed as hands, which could clutch and try to prevent you from going anywhere ‘Where the little brambles would not yield, But clutched and clung to them like sorrowing hands; they breathe like trees unstirred’

The 4th stanza is different somewhat different to the first three stanzas as, it has little mention of nature. In this stanza, the soldiers are being prepared for war, yet there is not mention nor indication of it. ‘No alarms Of bugles, no high flags, no clamourous haste’ However when it is said ‘the sun, like a friend with whom their love is done.’ The idea of death is reinforced into the minds of the reader, as the sun represents life and to say farewell to it, would mean death. The last two lines of the poem also describe life and what they will lose with this battle.

The 5th stanza is the beginning of the war. The speed of the poem increases dramatically. The first two lines describe their initiative action and the rest of the stanza, the reaction. Instead of having an actual opponent fighting back, Owen has described nature fighting the soldiers. All the scenery created by the war, has been portrayed as things caused by nature. ‘And instantly the whole sky burned With fury again them’ this phrase was used to depict the sudden explosion of the bombs, yet to state that the ‘sky’ burned, he emphasizes the extent of the battle. By using nature to describe the fighting and the results of the it, it makes the opponent seem huge and the battle hopeless, it also gives the feeling that everything is against them. Upon using ‘earth set sudden cups In thousands for their blood’ It implies that the whole world wanted their blood to be shed in puddles on the ground. The last line also describes the death of many soldiers. ‘chasmed and steepened sheer to infinite space’ This connotes that the earth suddenly split and swallowed everyone up with it, and an effective technique of declaring the demise of many.

The last stanza is the conclusion to the event, and it is also in this stanza that more of the poets dislike for war is informed to the reader. In a continuation to the previous stanza, the poet informs us with the destructive nature of war, which is also cleverly portrayed as environment being the enemy, but unlike before, there are very few still standing and fighting. ‘of them who running on that last high place Leapt to swift unseen bullets or went up On the hot blast and fury of hell’s upsurge or plunged and fell away past this world’s verge,’ After all many that were left, ended up being killed in the array of bullets and bomb blasts. There is much irony in this stanza of the poem. ‘Some say God caught them even before they fell’ The word which is striking is ‘some’ It connotes that perhaps god didn’t catch them, and they also died, only to arrive in hell, just like those which managed to survive.

The poet tells that those that remained were monstrous to their enemy, sequentially to win the war. ‘With superhuman inhumanities’ By using these expressions, the poet has highlighted the extent acted by the men as they are said to be inhumanities instead of cruelties. The last four lines of the poem shows the poets thought on war. Their battle is described as having ‘immemorial shames’, which connotes that the war was pointless and the victory empty. This is furthered by the last line of the poem ‘why speak not they of comrades that went under?’ This tells that the survivors of the war did not converse about their dead companions and it implies that it would have only brought upon pain and further the notion: that war is pointless.

The poem has been written with style. Although contrast via nature is used to exaggerate the impact of war, it is very effective in the poem. Owen has clearly succeed in expressing his view of peace and the pointlessness of war. 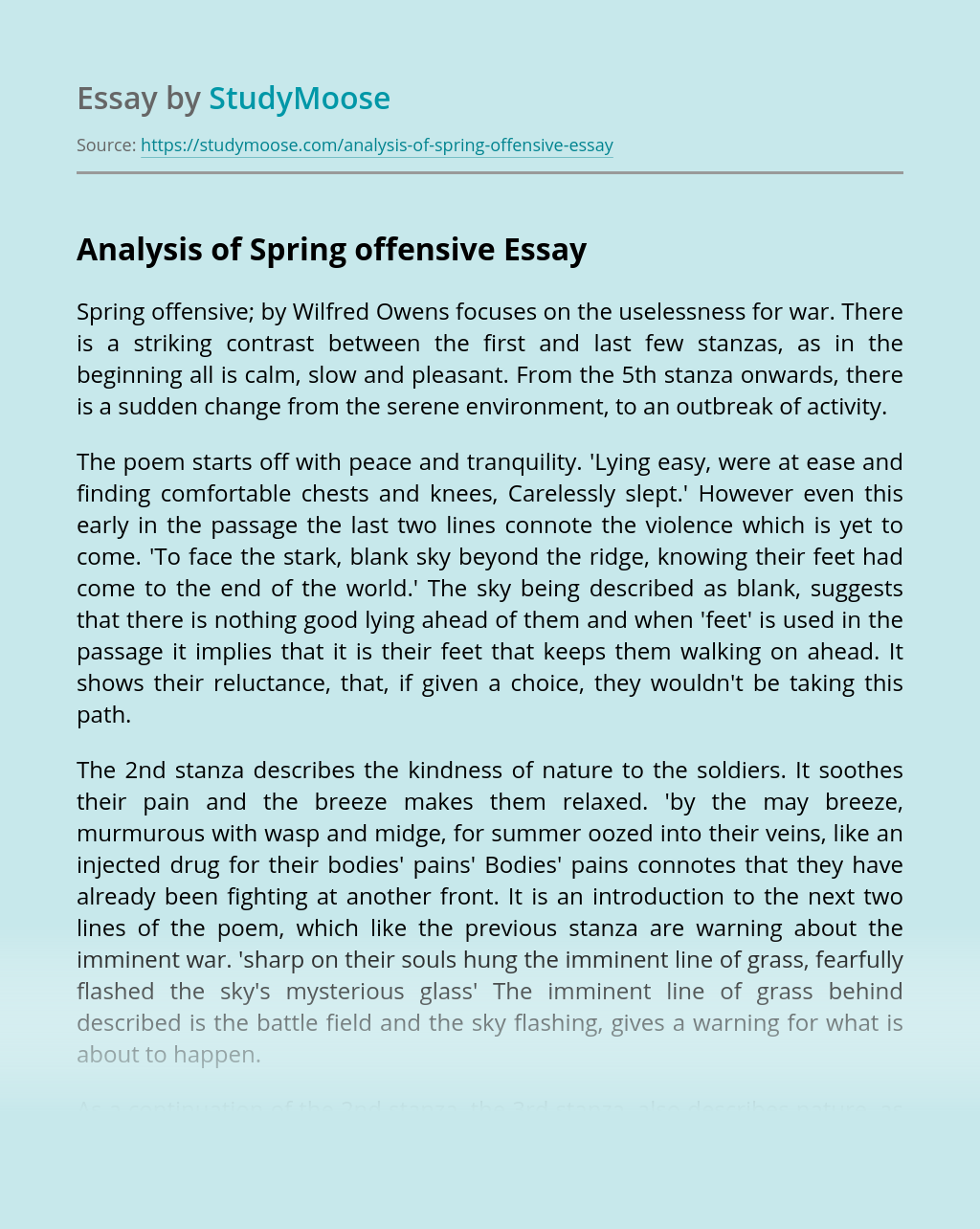 Thesis statement  The year 1776 was the year of battle for the revolutionary war. Great Britain had abandoned slavery many years ago but the revolutionaries had not stopped up until 1862 when they decided to stop it. Book summary The book talks of the revolution in the good year 1776. It was a year that... VIEW ESSAY

The life of Anne Moody and the events of the civil rights movement are chronicled in her autobiography and a book called “Coming of Age in Mississippi” which was published in 1968. In this essay, this autobiography will be drawn upon and her involvement in the movement will be analyzed. The thesis for the essay... VIEW ESSAY

The multinational business and ethical responsibility are parallel topic. Nestle faced with the rising of consumer boycott which came to be a broadly issue in case of business ethics. This essay extends three specific ethical issues of excessive price of bottled water which provided quality as similar as tap water and should not be placed... VIEW ESSAY

Foreign aid is the voluntary transfer of resources from one country to another given at least partly with the objective of benefiting the receipt country. It defines the financial flows, technical support or assistant, commodities that are declined to promote economic development and welfare as the main objectives. Culture of dependency is the way that... VIEW ESSAY

View sample
Why to students flunk out of college.

As many as 50% of students fail to graduate from the college in which they first enroll. Most people assume higher education is a right of passage from adolescent to adulthood.1 Truth is most teenagers aren’t ready for grown up responsibilities. Reasons students may drop out of school may be overwhelmed by college schedule, the... VIEW ESSAY