The history of the wall which divides the United States and Mexico is quite major. The wall was created in 1848, but back then there was only a barbed wire that kept the Mexican cattle away from American crops. “After some time, George W. Bush, Obama and President Clinton started building a more sizable wall. Combined they are responsible for 97% of the wall (Jean Guerrero 2017).”

The wall should not be built because of the cost and the harmful things it does to people and animals.

Don't use plagiarized sources. Get your custom essay on
“ Americas Border Wall ”
Get custom paper
NEW! smart matching with writer

For example, the building of America’s border wall between Mexico and the United States has a negative impact on people’s lives. “The wall affects jobs and investments. The wall will also affect the jobs of border guards, doctors and drug dealers. An informal survey revealed, that the wall is an bad investment (Heather Long 2019)”. “For example, when the people get sick from the drugs they have to go to the hospital so that cycle helps the people get cured, it also gives the hospital money and hire more employees(Deepak Chopra 2017)” Trump said , “Mexico will pay for the wall.

” ,which will not happen because Mexicans want to go in the U.S. so building a wall will not be a good deal for them. “Also, medical care is more important than a wall because viruses are spreading all over the U.S. and people are dying. (Hayoun Massoud 2017)”

Research confirms,that animals are also a source of threat in this topic.

The amount of money spend on the wall is way too much for just a border wall. There is no way that Mexico would pay for the wall because Mexicans take out money from the U.S. so technically it would be a good deal for Mexico not to build a wall. Border guards could be a cheaper option and won’t be easily contaminated. Mexicans also build tunnels under the wall and smuggle drugs. Also, Instead of America paying “20 billion dollars for the wall they can put the money into medical care for U.S.A. So If you pay 20 billion dollars into a wall you won’t get out anything but instead if you pay less to get border guards and free medical you get something out of it. So all of this also equals up to a problem for animal migration and landscapes start to erode(Kate Drew 2017) ,(David Bier 2016).”

Solutions to these problems can be found , but how. I have all the information why or how the wall will not be built. First, Nancy Pelosi is a democrat and a congresswomen who is in charge of giving money for the national emergency and she is the one who can block the agreement and stop Trump from building the wall. Congress or the parliament will receive the national emergency and people will vote and the wall will not be build because the fee that has to be payed is too high and the government will reject it. Mexico is stealing the wall surely but slowly. But first they are stealing the concertina wire and then they will destroy the whole barrier.

As you can see the wall affects a lot of things and could hurt the investments, people and there are solutions to how to stop the wall. Lastly, you have to agree what a threat this could be for everything and everyone.

Hayoun, Massoud. “How Trump’s Wall Is Affecting Those at the Borders.” US-Mexico Border |

Holpuch, Amanda. “What Exactly Is Trump’s Border Wall and Why Does He Want $5.7bn for

Kate Drew, special to CNBC.com. “This Is What Trump’s Border Wall Could Cost.” CNBC,

Simon, Johnny, and Johnny Simon. “To Understand Trump’s Immigration Speech, Look at the 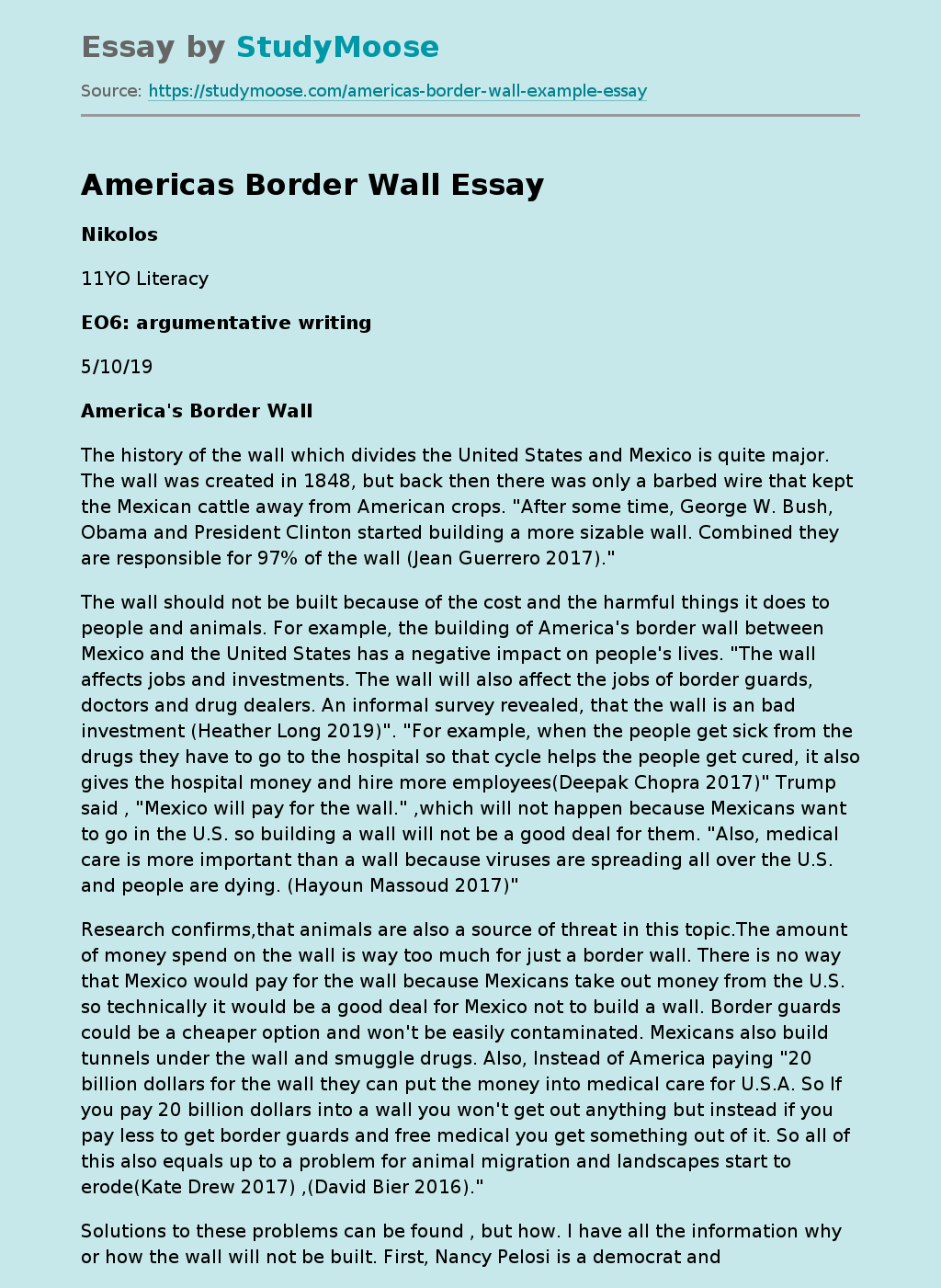