American society has many different races and ethnic group, various social groups. Therefore, there is a high possibility that conflict will occur without preference but with prejudice. The Sociologists define a race as the social construction of race (). In the past, race defines skin colors, regions, and ethnicities. As society has changed, the concept of the race also changes. Sociologists and racial theorists Howard Winant and Michael Omi provide a definition of race that situates it within social, historical, and political contexts, and that emphasizes the fundamental connection between racial categories and social conflict ().

Don't use plagiarized sources. Get your custom essay on
“ American society has many different races and ethnic group various social groups ”
Get custom paper
NEW! smart matching with writer

The conceptions of race in sociology are considered as distinguishable in a society based on specific features because of their biological or cultural features. Dominant groups in society could label it. So, our society presents people to recognize racial class as White, Black, and Yellow. In fact, a classified race is socially constructed.An ethnicity, like race, is difficult to define because its meaning has changed over time.

Ethnicity is a cultural group in which a group shared culture with each member, such as faith, history, religion, and more (). Groups that share the same culture develop into their own historical and social experiences. For example, East Asian, share similar languages, beliefs, and religions over time, and they are called a homogenous. Furthermore, as people begin to immigrate and leave their home country, they bring their ethnicities and experiences to the United States. It can create new groups which show different ethnic and spiritual differences in American society.

Instead of creating a new culture, they become assimilation, a process by which minority groups or groups abandon their identities by taking on the characteristics of America’s dominant culture (). According to Peter D. Salins’s widely noted Assimilation, American Style, “Immigrants would be welcome as full members in the American family if they agreed to abide by three simple precepts;” first, they had to accept English, and second, they were expected to live by what is commonly referred to as the Protestant work ethic; lastly, they were expected to take pride in their American identity and believe in America’s liberal democratic and egalitarian principles (). Some people want assimilation, but many reject as well. They want to protect their culture as immigrants, and they realize that they have many difficulties in assimilating. For example, many immigrants do not think that living in the United States should learn English. One group is formed where the same ethnic groups live together, and they make their small neighborhood in the United States.A minority means not the importance of people or inferior in number or size (). Sociologist Louis Wirth defined a minority group is from the others in society as objects of collective discrimination because of their physical or cultural characteristics (). In other words, a minority group is a target of discrimination, less population, and weakness. It is not essential to observe being a numerical number. Examples of the social classes in the United States, even though the number of lower-class are more than high-class, the lower-class does not belong to the power group, as the dominant group. It shows that the defined minority group is related to the wealthy, economic, and political in society. As I mentioned, minority groups are objects of collective discrimination. Discrimination is the behavior of treating certain groups as people without considering their unique and different characteristics and rejecting the equality treatment they are hoping for. It is an act based on natural purpose and social categories on the premise of distinction. Discrimination can be divided into age, religion, health, and so. Today, several state and federal laws prohibit racial discrimination and religious discrimination. Moreover, discrimination consists of individual discrimination and institutional discrimination. Individual discrimination includes an intention and the actions of a small group or between two people. When an Asian man wants to move an apartment which lives most of White, the manager refuses to sell an apartment to them. The example is individuals acting against other individuals. However, institutional discrimination includes social institutions in a large group. Like white privilege, they, white people, can get the benefits from society because they have a white skin color. Controversy, prejudice is an attitude that has one-sided opinions or opinions on a particular group, and generally accompanies negative emotions and evaluation. Prejudice against a particular group leads to discrimination by appearing as external action, such as giving disadvantage through the action of negative evaluation in the situation where the group and the members belonging to the group are treated. Thus, the basis for such discrimination is prejudice. Besides, people think of prejudice and stereotypes as the same concept, but stereotypes are mainly about cognitive aspects of expectations or beliefs, but prejudice is not only about cognitive processes that include emotional aspects. Prejudices about blacks in American history in the past began with stereotypes about the typical characteristics of black people, whether they are lazy and violent to black people.Along with stereotypes, they are transformed into negative evaluations, and discriminatory racial segregation appears. In this case, white people represent in term of the word “racism” about black people. Racism is that some people define themselves as superior races and rationalize inequalities, exploits, and conquests of other races. I assumed that Race IAT is a measurement to the scale of racism in American society. The implicit association test (IAT) is that the kind of my implicit attitude toward race is negative or positive (). I got my result was no automatic preference between African Americans and European Americans. As I got the result, I am surprised because the result is exactly what I thought. The reason why I thought that is that before I moved to the United States, I had never talked with African and European Americans. Although Korea, where I am from, is slowly transforming into a multicultural society, the country is still mostly homogenous. As a result, I do not think I have ever tried to get interested in, study, or understand many races or ethnicities different from me. 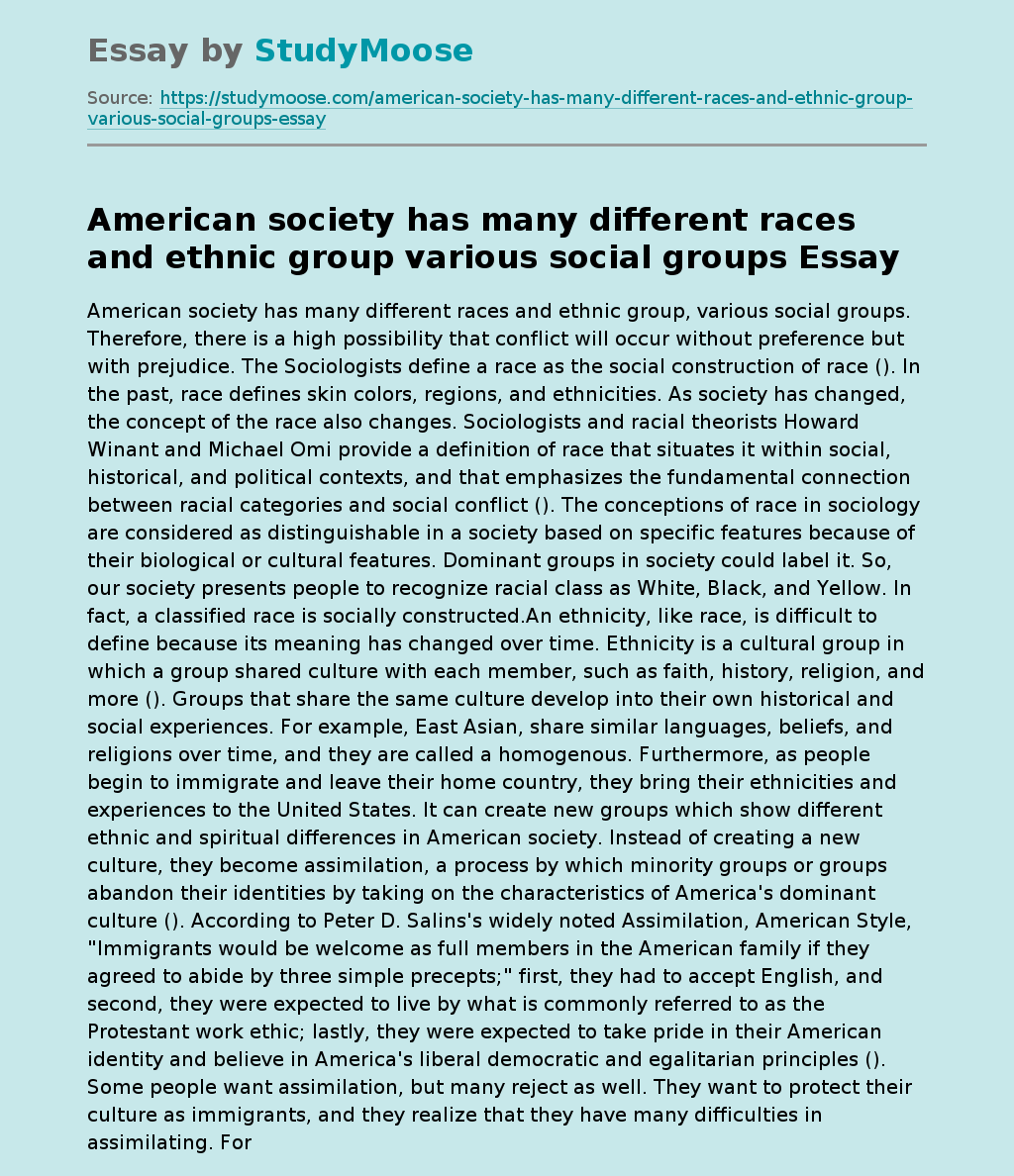