What were the aims and achievements of Lord Castlereagh in foreign affairs after the Congress of Vienna?

At the end of the congress of Vienna he had enormous prestige among the statesmen of Europe and already had considerable achievements to his credit.

* Was to preserve peace and he had hoped this could be achieved by regular meetings with the great powers to solve problems and quell disturbances by a concert of Europe. This is states acting in a concert and not by confrontation.

* However, he did not believe it was right for the great powers to intervene in the internal affairs of other states, and did not want Britain to become involved in any such action.

Don't use plagiarized sources. Get your custom essay on
“ What were the aims and achievements of Lord Castlereagh in foreign affairs after the Congress of Vienna? ”
Get custom paper
NEW! smart matching with writer

* He was also keen to get the army occupation removed in France- they agreed – gave Louis 18th popularity and help stabilize the country.

* Castlereagh felt it was wrong to punish the Bourbon family too heavily for the behaviour of Napoleon.

* Was responsible for the Quadruple Alliance – Britain, Russia, Prussia and Austria – agreed to maintain the peace settlements and to hold regular congresses to prevent threats to peace.

* Congress System got under way with the Congress of Aix-la-Chapelle(1818)- to consider what to do about France which had paid off the 700 million Franc indemnity and was settling down under Louis18th. It was decided: France should take part in the future congresses, transforming the Quadruple Alliance to the Quintuple Alliance; problems about the rights of Jews in Europe; Swedish payments to Denmark for the acquisition of Norway and the treatment of Napoleon on St Helena.

* 1820 was a year of revolutions inspired by Liberalism, in protest against autocratic Governments.

I.e. In January troops were gathering at Cadiz before sailing to attempt the recapture of Spain’s colonies (such as Argentina, Mexico, Chile) which had declared themselves independent during the wars. Instead the troops turned on the Government and force King Ferdinand 7th to grant a democratic constitution. Similar events in Portugal, Naples and Piedmont also achieved democratic constitutions.

* The congress of Troppau(1820) Castlereagh did not attend this meeting as the meeting was set up intended to destroy the new constitutions. It was not that he approved of Liberal revolutions, but was unwilling to involve Britain in general commitments on the continent. He believed the alliance system was no morally right to force their way on smaller countries. In addition he knew that the opposition in parliament would be furious if Britain supported intervention, and was already extremely suspicious of Russian motives, since they were itching to send their army into Europe and crush the Spanish Revolutions. Unimpressed by Castlereagh’s objections, the other representatives issued the Troppau Protocol which asserted the right to intervene in any country where a revolution seemed in danger of infecting other countries. Castlereagh rejected the protocol, and there seemed to be a split in the Alliance.

* The Congress of Liabach(1821) – A continuous of the previous one above. Castlereagh sent his half brother again to show his disapproval. He did concede however that the Austrians should intervene in Naples, provided it was not done in the name of the alliance. – Austrians troops quelled the revolts in Naples; and also quelled in Piedmont, a action Castlereagh did not approve. Just before the congress ended, Europe was further complicated by the outbreak of Greek revolts against the Turkish ruler. Relations with Britain and the rest remained tense, and were obvious that Castlereagh’s idea of international co-operation was being misused by Britain’s allies.

* Another congress was planned for Verona in 1822 to consider the Spanish and Greek problems, but before the meet, Castlereagh committed suicide.

What were the aims and achievements of Lord Castlereagh in foreign affairs after the Congress of Vienna?. (2020, Jun 01). Retrieved from https://studymoose.com/aims-achievements-lord-castlereagh-foreign-affairs-congress-vienna-new-essay 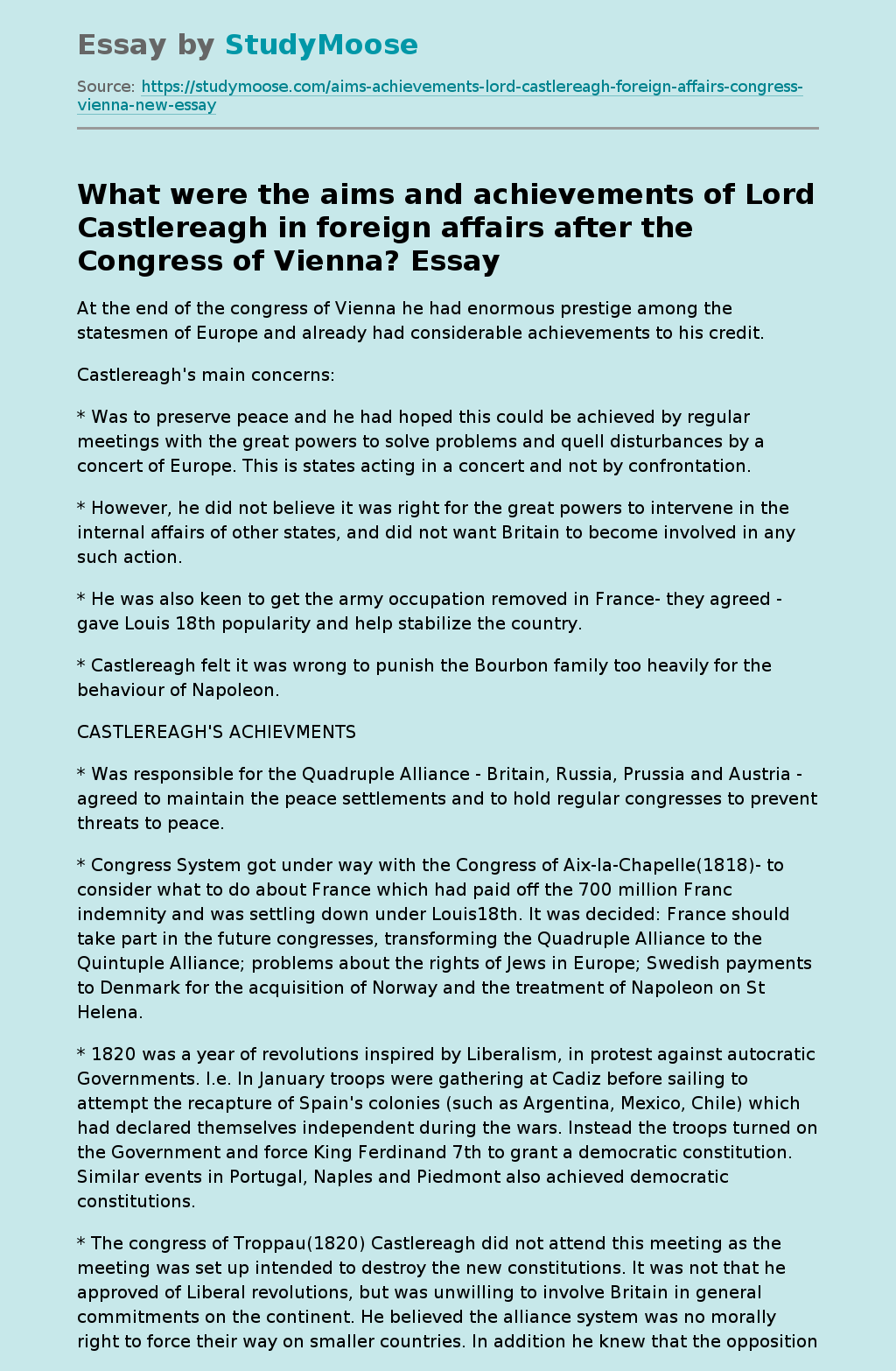