A pendulum is a device which consists of an object suspended from a fixed point that swings back and forth under the influence of gravity. This effect is known as gravitation. However simple it may seem, this structure is very beneficial in our everyday life for it is used in several kinds of mechanical devices such as the all popular grandfather clocks. In addition to this, a pendulum could determine the local acceleration of gravity. This is the case, as the strength of gravity varies at different latitudes and as gravity is one of the main forces acting on the pendulum, the acceleration of gravity could be noted.

Don't use plagiarized sources. Get your custom essay on
“ The aim of this experiment is to investigation of gravity by sample pendulum affects the time for complete swings ”
Get custom paper
NEW! smart matching with writer

A pendulum can be seen as a device whose energy is continually changing.

When the pendulum swings to & fro, its energy changes from gravitational potential energy to kinetic energy and so on.

I predict that the length of the pendulum will affect the period (T). An

The pendulum is able to work when the bob is raised to an angle larger than the point at which it is vertically suspended at rest. By raising the bob, the pendulum gains Gravitation Potential Energy (GPE), as in being raised; it is held above this point of natural suspension and so therefore is acting against the natural gravitational force.

Once the bob is released, this gravitational force is able to act on it, thus moving it downwards towards its original hanging point. We can say therefore, that as it is released, the GPE is converted into Kinetic Energy (KE) needed for the pendulum to swing. Once the bob returns to its original point of suspension, the GPE has been totally converted into KE, causing the bob to continue moving past its pivot point and up to a height equidistant from its pivot as its starting point.

The same factors affect the pendulum on its reverse swing. GPE gained after reaching its highest point in its swing, is converted into KE needed for it to return back to its natural point of vertical suspension. Due to this continuous motion, the bob creates an arc shaped swing. The movement of the pendulum is repeated until an external force acts on it, causing it to cease in movement.

The pendulum never looses any energy; it is simply converted from one form to another and back again.

For calculating ‘g’ the formula had to be rearranged:

Where: g is the acceleration to gravity; T is the period & l is the length.

Out of the above, the length of the pendulum had to be measured and then the period with that information. Instead of using the formula, a graph could be drawn of length against T2, calculate the gradient, invert it then multiply by 4p…

* Firstly I set up the equipment as shown above:

* Measured the string to 50 cm. from the bottom of the corks to the middle of the mass.

* Then released the bob and started the stopwatch at the same time.

* Then stopped the pendulum swinging and recorded the times. Then I repeated experiment with the same length 3 times.

To make the experiment as fair as possible the same bob and equipment were used for each experiment. The length of pendulum was measured from the base of the split cork to the middle of the metallic bob. The angle at which the bob swung also had to be the same.

There are many accidents that could happen if this experiment was not carried out safely; below I have outlined a few simple guidelines to prevent such accidents occurring.

Do not swing the bob from large angles

Could fall over and hit someone

Make sure a large mass is holding it down

Time for one swings (s)

In conclusion I have found that my prediction was correct. The length of the pendulum will affect the period (T). An increase in length will produce an increase in time. This can easily be seen when I look at the results table.

My results support the prediction I made because I said ‘the increasing the length of string will increases in time. I believe I was correct.

My graph is a straight line. I am confident with my results because my line is on nearly all of the points.

I used the method proposed in my plan, taking three readings of each value and measuring the time taken for 20 oscillations rather than for 1. During the experiment, I observed that each oscillation for the same length of string seemed to be equal. This showed that the pendulum did not slow down as the number of oscillations increased. I took the safety measures described in my original plan.

During the experiment I was careful to use accurate measurements in order to obtain sufficiently accurate results, for example:

– The string was measured with a meter ruler, to the nearest cm, to ensure that each measurement had a difference of exactly 10cm.

– The angle of amplitude will be measured with a protractor to the nearest degree to ensure that the angle remains constant throughout the experiment.

– A stopwatch will be used to measure the period accurately. The period was measured in seconds, with the stopwatch measuring to a degree of accuracy. However, I have rounded up each time to the nearest second to give appropriate results.

The aim of this experiment is to investigation of gravity by sample pendulum affects the time for complete swings. (2020, Jun 01). Retrieved from http://studymoose.com/aim-experiment-investigation-gravity-sample-pendulum-affects-time-complete-swings-new-essay 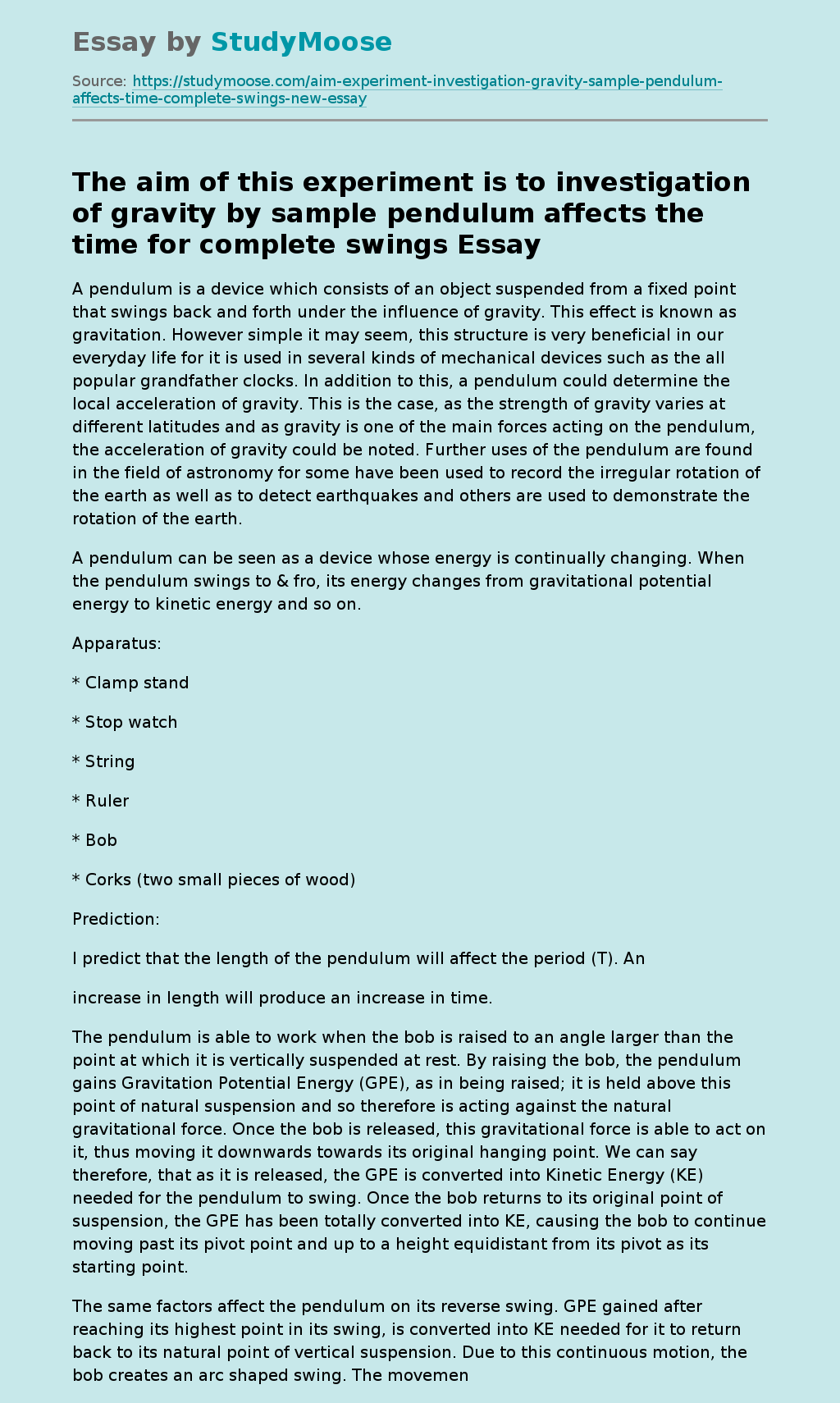