Advantages of Being Bilingual Essay

In today’s society, twenty percent of the United States citizens are bilingual which demonstrates that America is rapidly growing. With all this growth, people are becoming fast learners when it comes to accumulating multiple languages. With the good comes the bad, therefore not all people are fortunate enough to learn and develop another language. By understanding and comprehending two languages you have achieved a big accomplishment. Being bilingual is important, especially in today’s society, because it allows people to become a dependable source – when it comes to their occupation.

Don't use plagiarized sources.
Get Your Custom Essay on Advantages of Being Bilingual Just from $13,9/Page

Being bilingual is also important because it shows the time and effort put into learning a new language, which shows devotion. Overall, being bilingual is a huge benefit because it allows people to work globally, increases job opportunities, and it opens the doors to a new culture. Many businesses around the United States associate with their workers and customers globally.

Being bilingual is efficient because as the businesses expand, they need people to talk to others from across the globe.

Plus, if you can speak a language someone else cannot then you are reliable for that business. Another plus about being bilingual in the cooperate world is they usually offer a higher pay or rank to people who know multiple languages. Most companies do that because it is hard to find people out there that can fluently speak another language and can handle the situation and if those people were not there it would be chaotic. Therefore by stating all of this information, companies need bilingual people because they do not just deal with English speaking people, they also speak to people from all over the globe which is an important role to fill in a corporate job. Studies have shown that bilingual people have better task switching capacities because of their acquired ability to inhibit one language while using another.

In other words, speaking two languages forces your brain to recognize two different language systems. So, basically you become smarter. Researchers set lingual, arithmetical and physical tasks for 121 children, aged about nine, in Scotland and Sardinia, Italy. They found that the 62 bilingual children were significantly more successful in the tasks set for them. The study also assessed the children’s vocabulary, not so much for their knowledge of words as their understanding of them. Again, there was a marked difference in the level of detail and richness in description from the bilingual pupils. Bilinguals score higher on average on tests involving creative thinking or problem-solving. The ability to translate abstract concepts from one language to another also develops the skill to look at tangible problems in more than one abstract way. Did you know that people who speak more than one language tend to make fewer errors in their driving? A side benefit, nonetheless!

Bilingual adults and children seem to have social and emotional benefits like being able to internalize negative states like anxiety, aggression, anger, loneliness or low self-esteem less frequently. They have greater tolerance and less racism. It seems likely bilinguals would be more tolerant of differences and more open to diversity. According to studies, bilinguals tend to make better rational and financial decisions. Bilingual children are more likely to have an interest in the cultures that speak their second language, whether it is a “heritage” language or not. This can manifest early in life as an active interest in different educational avenues. Museums, fairs and street festivals, and even just visits to neighborhoods will have an inherent interest to bilingual children that monolingual children may not share.

Children raised bilingual are more likely to show tolerance for other cultures at a young age. They play more easily with children who do not speak their language or who come from different socioeconomic backgrounds, and are more likely to show an interest in socializing beyond their established circle. In early childhood, this helps greatly with school, which focuses heavily on social skills in the lower grades. It can also help prevent disciplinary needs later in life — more tolerant children are, overall, better-behaved children. Bilingualism promotes overall cognitive development because a bilingual individual encounters the world from two different language perspectives, which prevents them from having a limited experience. This extended way of thinking facilitates the approach to cognitive problems and higher level of abstract thinking.

Bilingual adults have a clear edge in business world. By being able to communicate in two languages, you have twice as many opportunities to land a great job. Being bilingual makes it easier to travel, find a job and belong to this new global world inside and outside of the U.S. Children’s brains are primed for the necessary language skill developments in a way that adults’ aren’t. Many of the advantages described here will show up most strongly if you start bilingualism in your child’s early age (the earlier – the better!). Adults can acquire the same skills and strengths through bilingual training, but it happens much more slowly (how much spare time do we have in our busy adult lives?) and with a greater need for tedious repetition. In conclusion, Bilingual individuals are the new norm and if you are monolingual you are staying behind the curve. It’s adapt to survive or you will not make it in this new world order.

Advantages of Being Bilingual. (2016, Aug 28). Retrieved from https://studymoose.com/advantages-of-being-bilingual-essay 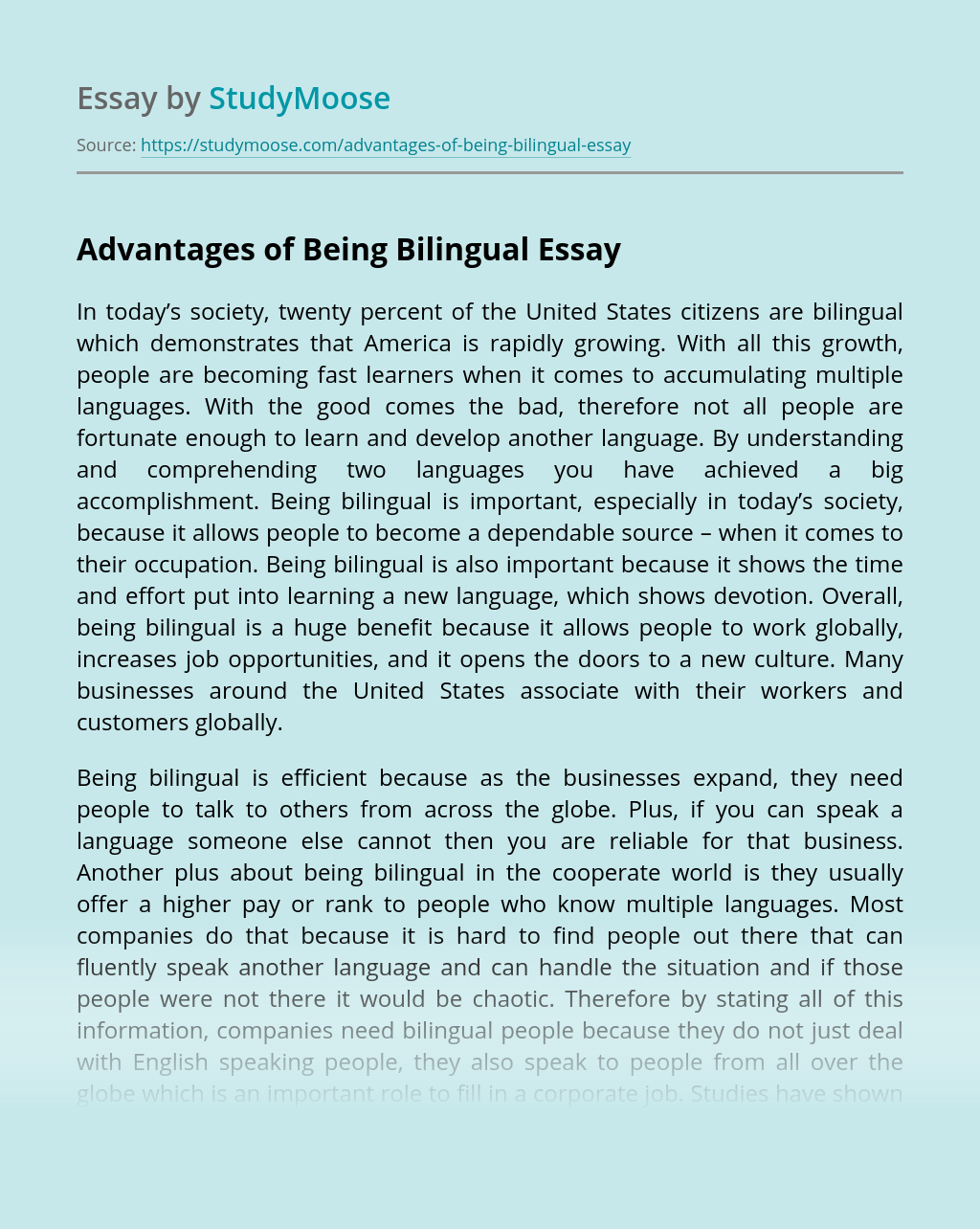 Vision portrays the conviction of an ideal vision which regularly

Vision portrays the conviction of an ideal vision which regularly lead people to seek after ridiculous standards, these standards are frequently differentiated and contradicted by truth. The short story “The Novice” portrays the afflictions the protagonist experienced by getting captured in an idealistic perspective and slanting his view of the real world. In W.D. Valgardsons... VIEW ESSAY

In Arthur Miller’s The Crucible, the playwright creates a scene based upon the Salem Witch Trials of 1692, yet the themes that the play conveys are still embedded in modern-day society. John Proctor, the lead character, is condemned for speaking up against the Puritan leaders, indicating a style of specific versus society. However, the play... VIEW ESSAY

1 How did your findings compare to the rest of your team and to the actual data provided by your teacher? What could account for any variation? 2 Why do you think the pelvis is often the first bone forensic anthropologists look to in determining sex from skeletal remains? The pelvis is the first bone... VIEW ESSAY

View sample
Crooklyn is a film that was released in 1994 by Spike Lee. It is

Crooklyn is a film that was released in 1994 by Spike Lee. It is about the Carmichaels, a middle class family that lives in the Bedford-Stuyvesant part of Brooklyn, New York around the 1970s. Centered around nine year old Tony Carmichael, this film tells the audience about her family struggles such as how her father,... VIEW ESSAY

Industrialization, ”the new economy” brought on a wave of new movements and activism in America. Labor movements, women’s rights activists, social, religious, and political reform are among the changes of the Market Society. Industrialization shaped Market Society expansion in many ways. Immigration, Nativism, Westward Expansion, the rise of Nativism,Transcendentalists Movement and The Second Great Awakening... VIEW ESSAY