The Benefits of Television

Television is part of the American culture. It benefits people in many ways. Many people use the television as a mayor part of information. Television is beneficial because it provides news, entertainment and education.

News is the first beneficial aspect of television. For example, people today need to watch the news to keep track of what is happening with the war in Iraq. Also, news provides information on weather, crime and many other news that are occurring around the world. Another example is that news gives people information on school closings and traffic before he or she may want to leave the house.

Don't use plagiarized sources.
Get Your Custom Essay on The Benefits of Television Just from $13,9/Page

These are some reasons why news on television are beneficial.

Entertainment is the second reason why television is beneficial. Entertainment takes peoples minds away from the bad situations that could be occurring in every day life. On the article “Friend or foe? The cult of tivo Cometh,” Warren st John says that “people that use the device called tivo is a gods machine”(1).

This is because tivo is a device that records one’s favorite entertainment shows and the only shows they might enjoy(1). Also at the same time this device deletes all of the commercials so viewing can be more pleasurable(st John,1). For example, entertainment television can have on going programs twenty fours hours a day. Entertainment is the second reason why television is beneficial.

The Benefits of Television. (2016, Jul 07). Retrieved from https://studymoose.com/the-benefits-of-television-essay 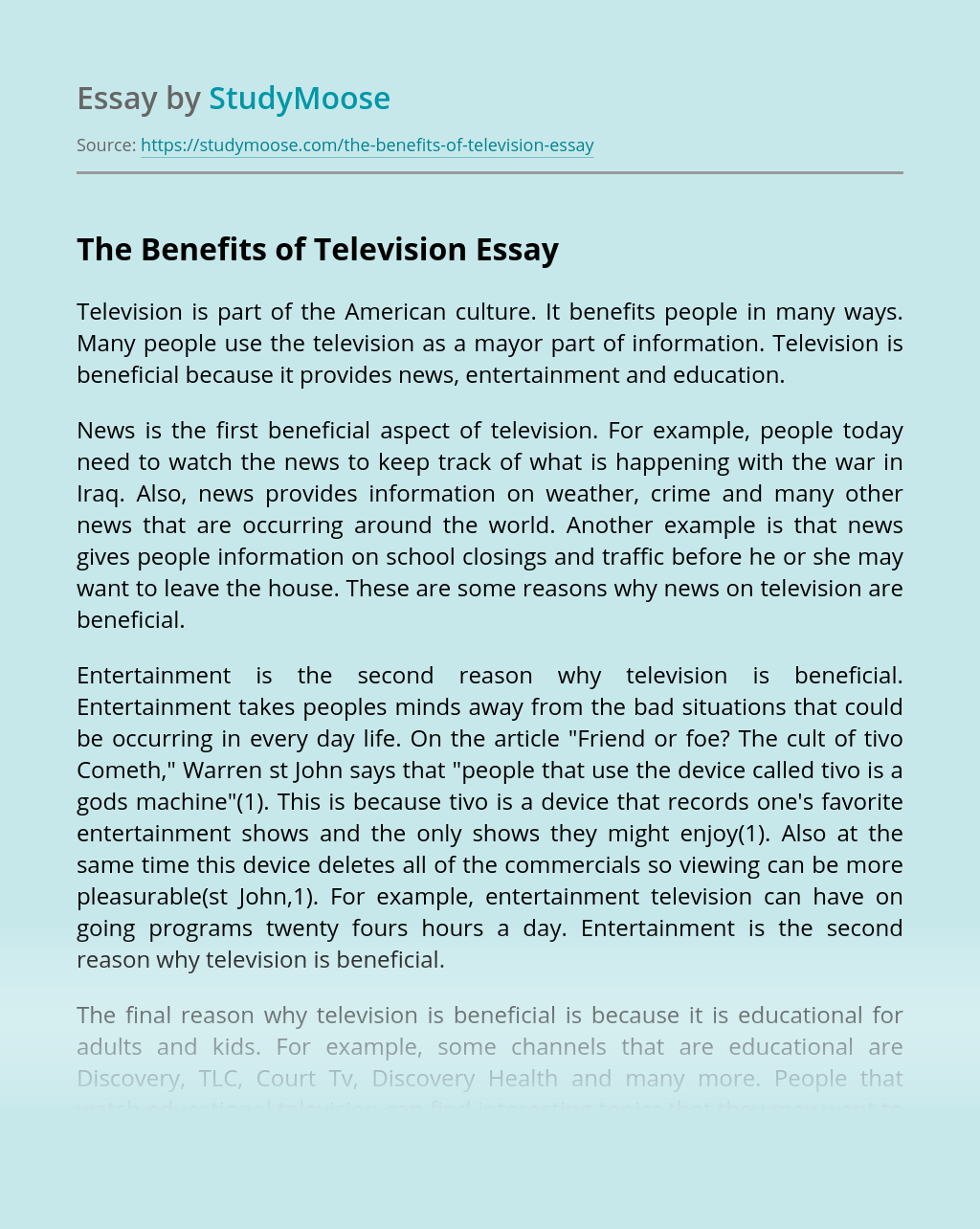 The amount of violence in films

The Walt Disney Company is based in Burbank, California with a geographic scope as sales are generated internationally. Their main competitors include 21st Century Fox, and Time Warner who also compete in the media industry, producing television programs, films and videos. Disney had a net profit margin of 15.41%, which is higher then the industry...

Get Essay
Influence of Entertainment Media

Entertainment is a fun, enjoyable, leisure activity for consumers to amuse their time with. People do what they need to survive, meet their basic needs, and can fill up the rest of their time with entertainment. Therefore, it is no wonder that the media is able to invade entertainment such as film, television, Internet, books,...

TV has bad effects on children: Agree or disagree

From technological perspectives, we are in a splendid age. Nowadays, TV as an item of technology has actually turned to an integral part of our lives. This concern that “TELEVISION has bad impacts on kids “is a controversial one and can be approached from different angles due to its complexity; however in my opinion, a...

Many Films Have a Bad Influence on Young People. What Is Your View?

Everyone needs entertainment to refresh their minds and get relaxed after everyday chores. The most common way people usually use to entertain themselves is to watch a Movie. Movies are entertaining but some movies can have a negative impact on the audience esp. youth. Youngsters are immature and easily susceptible to any perception. In this...