There are several views of curriculum that many involved have encountered. One view is that the curriculum must be a prescription; it should tell educators and all involved what to do, how to do it and in what order. Another view is that a curriculum is just a mere proposal; there is room for modifications and other provisions. In Zimbabwe, the national curriculum comes from the Curriculum Development Unit (CDU), which is the Centre, where specialist curricularists develop it. The curriculum is distributed as a package to the provinces and districts then lastly to the schools where it is to be implemented by educators.

Don't use plagiarized sources.
Get Your Custom Essay on Advantages and disadvantages of taking curriculum packages from the centre as mere proposals and not prescriptions in Zimbbwe Just from $13,9/Page

This exposition seeks to identify some of the advantages and disadvantages of taking such packages as proposals and not as prescriptions in Zimbabwe. Stenhouse (1975) defines curriculum as “… an attempt to communicate the essential principles and features of an educational proposal in such a form that it is open to critical scrutiny and capable of effective translation into practice”.

He suggests that a curriculum is rather like a recipe in cookery. A curriculum, like the recipe for a dish, is first imagined as a possibility, then the subject of an experiment. The recipe offered publicly is in a sense a report on the experiment. Similarly, a curriculum should be grounded in practice. It is an attempt to describe the work observed in classrooms so that it is well communicated to teachers and learners. So, within limits, if a recipe can be changed and varied according to taste so can a curriculum (Stenhouse 1975: 4-5).

This definition focuses more on the process of teaching and learning, the angle from which this discourse unfolds. One advantage of taking a curriculum package as a proposal is that teachers are empowered professionally resulting in greater academic growth. Stenhouse (1975) is of the idea that the proposal is not to be regarded as an unqualified recommendation but rather as a provisional specification, implying that it should not limit the freedom and creativity of both teachers and students. In Zimbabwe, such an approach can be widely accepted because educators can expect, even invite negotiation and transaction, and use their practical situational knowledge for implementation and for modifying the original package according to the demands and resources of their specific localities. Using this approach in Zimbabwe where we find different ethnicities with unique customs, beliefs and lifestyles, makes the learning experience meaningful and relevant allowing learners to gain a sense of ownership of their education.

This expansive exposure, which also directly involves the local community, is beneficial to the learner in that it equips one to be a well-rounded and adaptable member of society. More so, and associated with the above, given the uniqueness of each school and classroom setting in Zimbabwe, the scripted curriculum is not always appropriate for all learners. Some students sometimes have difficulty accessing areas of the curriculum that can be challenging. Taken as a proposal, it is an advantage for the teacher to be able to modify teaching approach, take note of the leaners’ differences and make sure that everyone catered for. The curriculum’s success highly depends on the methods of instruction put in place by the teachers. A curriculum therefore “… is a way of translating any educational idea into a hypothesis testable in practice. It invites critical testing rather than acceptance” (Stenhouse (1975:144).

Thus in this sense, a curriculum is not a package of materials or a syllabus of ground to be covered but simply a guideline on the practice of teaching. As such, the major disadvantage of the proposal approach is that it rests upon the quality of teachers. There is need for highly qualified teachers who are able to modify curriculum. There will be severe consequences on what could happen educationally if the teacher is inadequately trained. Zimbabwe is highly dependent on untrained teachers to fill the void left by professionals opting to work abroad.Gatawa(1990) contends that if the curriculum package is taken as a proposal, there is a high probability that teachers will only teach what they know, ignoring the major objectives of the document all together.

This means there is no guarantee that national goals will be achieved because the curriculum will be too localized and in turn produces students with limited marketability. Invariably so, Gatawa (1990) is of the view that there will be too many curricula in one education system, making it virtually impossible for learners to transfer from one school to another. Eunitah et al (2013) contend that in developing educational contexts like Zimbabwe, it is premature to do away with centrally prescribed curricula in order to accomplish uniformity in the provision of education. This implies that developing countries like Zimbabwe need a centralised curriculum system to determine levels of academic growth and educational development. Financially, the proposal approach is not viable because institutions have to continually replace curriculum material or buy material to suit a particular teacher’s desire (Lawton, 1980).

Taking the curriculum package as a proposal does not work in this context so the prescription approach is therefore more suitable. In light of the above, one advantage of taking a curriculum package as a prescription is that the syllabus content is decided upon centrally and is based upon the goals and philosophy of the nation (Gatawa, 1990) . This means there is uniformity in what is being taught so learners can easily adapt if there is need for a transfer. There is also uniformity in that learners taking the same subjects sit for the same examinations and one examination board like ZIMSEC, as in the Zimbabwean context, is responsible.

Entry requirements for universities and colleges can be centrally determined and parity can be ensured. Lawton (1980) is also of the view that the prescriptive approach to curriculum implementation satisfies the political need for a system of accountability. In Zimbabwe, there are considerably more government educational institutions than private ones so when the ‘prescription’ is explicitly stuck to, educators can account for the resources invested in the education sector by the state. More so, a prescriptive approach to the curriculum package makes sure that the Ministry of Education approves all textbooks used. Where teachers are minimally trained, as is the case with temporary teachers in Zimbabwe, the prescriptive curriculum tells the teacher what to teach, how to teach it and the materials to use in the process.

Maravanyika (1982) is of the view that it makes standards and expectations about what should be taught and learnt clear to everyone. A prescribed curriculum therefore makes progress and attainment measurable and comparable on a national scale .That way, underperformance is easily dealt with while success can be modeled and shared. To this end, the prescriptive slant is more effective as it limits deviations that may otherwise be of no relevance, come examination time. However, taking a curriculum package as a prescription undermines what Lawton (1980) terms a ‘…teachers’ legitimate desire for professional autonomy….’.This means the prescriptive slant is too restrictive and assumes that the user is incapable of making a good curriculum.

This scuppers teacher development because it does not allow for research. The educator is limited to giving the prescribed instruction that generally stresses content, mainly knowledge, at the expense of the development of attitudes and skills. In Zimbabwe, learners are chiefly taught to pass examinations rather than to master and develop lifelong skills (Ndawi and Maravanyika, 2011). There is a scramble for certificates with little regard for the development and demonstration of productive skills.

The education system is therefore suffering instead of developing. Above all, the prescriptive approach also overlooks the possible differences in the availability of resources. It assumes that educational institutions have the same facilities; learners are similar and operate in the same circumstances (Tanner and Tanner, 1975). This is clearly not the case in Zimbabwe, rural schools are traditionally underfunded and the infrastructure is either temporary or dilapidated. This is the reason why most rural based schools tend to perform poorly compared to urban schools. Curriculum implementation should take socio-geographical learner diversity into consideration, the essence of which involves addressing the needs of different learners at different institutions. In summation, the proposal approach fosters lifelong learning and independent thinking but is exhaustive in terms of skills and resources. The prescriptive method is also beneficial and even more appropriate in Zimbabwe’s examination oriented system.

Advantages and disadvantages of taking curriculum packages from the centre as mere proposals and not prescriptions in Zimbbwe. (2016, Apr 13). Retrieved from https://studymoose.com/advantages-and-disadvantages-of-taking-curriculum-packages-from-the-centre-as-mere-proposals-and-not-prescriptions-in-zimbbwe-essay 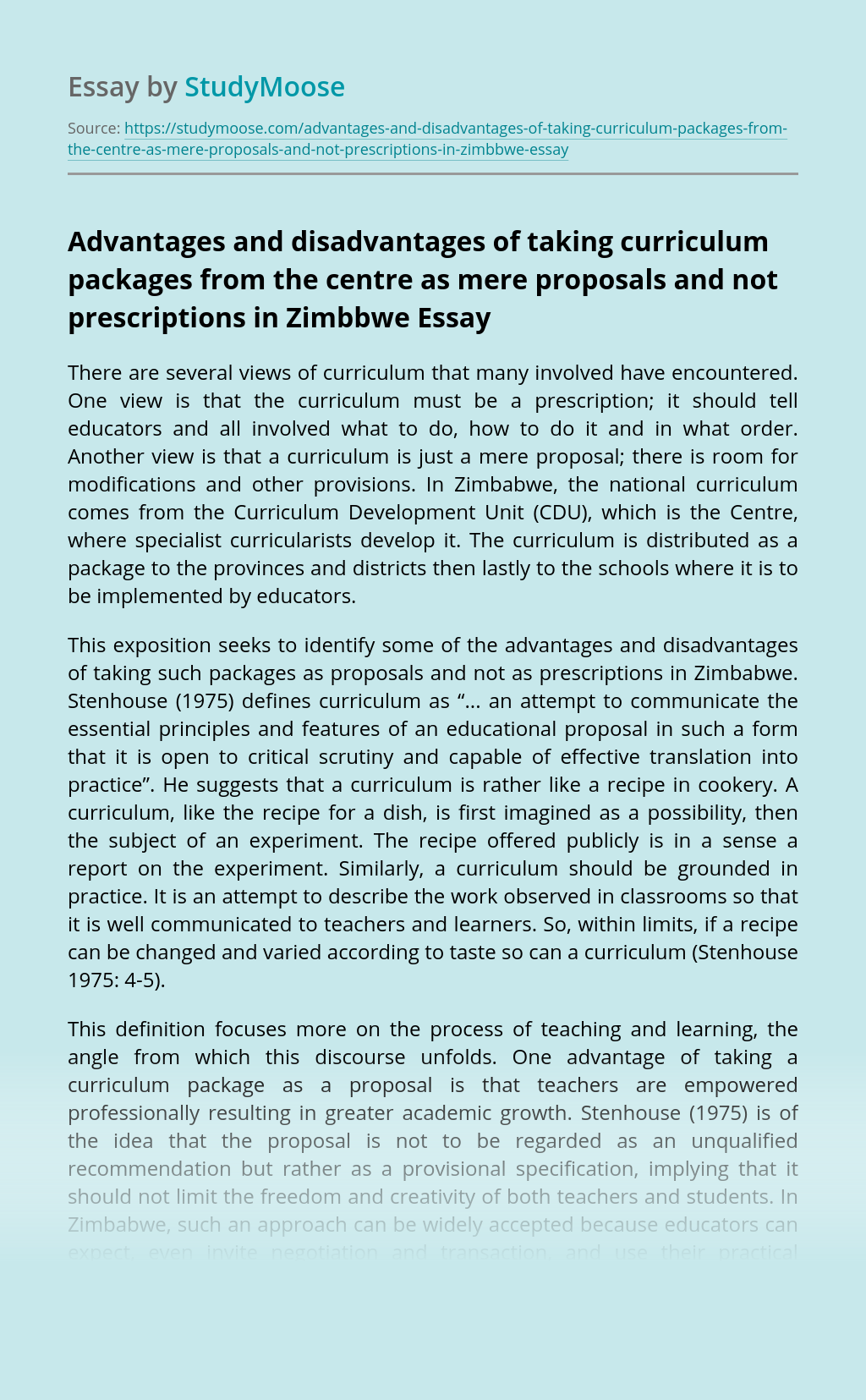