The advantages and disadvantages of probation and parole

What is probation? Probation is a court order sentencing that consist of the defendant to either serve or complete the remaining sentence of imprisonment in a supervised community. The defendant that’s assigned to completing a probation sentence will be under supervision of an officer of the court; which are referred to as a Probation Officer. Probation is one of the most common criminal sentencing processes in the United States. A probation sentence generally allows most defendant to remain free in society while under supervision of their Probation Officer.

Don't use plagiarized sources. Get your custom essay on
“ The advantages and disadvantages of probation and parole ”
Get custom paper
NEW! smart matching with writer

Those who are court ordered to probation are given specific court orders such as, maintaining good behavior, paying a fine, getting mental therapy, staying away from drugs and/or alcohol and reporting regularly to their court appointed probation officer. What is parole? Parole is an early release from imprisonment confinement.

Parole allows the defendant a second chance at reentering the community. Parolee’s are usually granted by statutes, and these provisions vary from state to state.

The board also establishes special conditions in order to address an offender’s specific needs, ultimately reducing risk and improving success under supervision (http://doc.mo.gov/PP/).

When it comes to probation and parole there are a lot of different advantages and disadvantages that comes along the way of defendant’s release. A defendant being granted the opportunity of being back in the community can bring some good to the community. The advantages and disadvantages can benefit the defendant and the government. One of the top advantages of releasing a defendant out on probation or parole would be lower cost. Low cost is considered an advantage because of the high cost of actually housing a defendant in a correctional facility because the government has to supply the inmates with food, clothing, beds, etc. According to Missouri statistics the cost of housing an inmate in the year of 2003 was $500 MILLION (EXCLUDING CAPITAL COSTS). Another advantage that come along the way of being released on probation or parole is the increase in employment.

Defendants that are released on probation or parole are given the opportunity to work full-time jobs. With the jobs that are offered to them they will be able to support themselves and contribute to the government by paying taxes (Schmalleger pg.386). Restitution is another form of advantage for the probation and parole program. Restitution is state ordered program in which the defendant is required to repay money or to donate money to the victim of the crime that was committed or to society. Ordering a defendant to pay restitution also helps them gain some responsibility. It is believed that community support is also known as an advantage. Community support is being considered an advantage because in cases where the defendant receives a probation sentence they will remain in the community of being with their families versus them being sentenced to imprisonment and it splits the family apart.

In cases where the defendant is granted parole they will be reunited with their families. Sometimes, defendants that are family oriented can be affected by being taken away from their families; such as wives, husbands, mothers, fathers, kids and grandkids. For defendants on probation or parole this opportunity will allow him/her to stay focused of not getting in trouble and abiding by the rules of the law. Community service is offered to the defendants as an advantage because it allows the defendant to take advantage of the services that are offered to them through the community. Services that are offered; consist of psychological therapy, substance-abuse counseling, financial services, support groups, church outreach programs and social services (Schmalleger pg.386). Some of these programs are offered to them in jail but attended the programs while out in society allows the defendant gain some responsibility of staying out of trouble and remain focus.

When speaking of the disadvantages of a defendant receiving a probation sentence or being approved for parole can have some downfalls to the process one of which can be relative lack of punishment. Relative lack of punishment, meaning that in cases of probation is the sentence ordered by the judge it could be seen as no punishment at all because the defendant will remain in society but under supervision of a probation officer. In some cases where the defendant is release from imprisonment to finish their sentence under the supervision of a parole officer due to good behavior or other special circumstances. The victim in the case can feel as if the defendant hasn’t been punished enough for be released from jail. The increase risk to the community and increase social cost can be one of the most common disadvantages of probation and parole. Allowing someone convicted of a crime back in society puts the community at risk of that defendant committing additional crimes.

Community supervision can never be enough monitoring for a person convicted of a crime. There’s a great percentage that has been proven that convicted felonies and ones convicted of misdemeanors tend to commit additional crimes which puts the community at a higher risk of being harmed. Increased social cost meaning the increased risk of new crimes, probation and parole increase the chance that added expenses will accrue to the community in the form of child support, welfare cost, housing expenses, legal aid and indigent health care (Schmalleger pg. 387). The final disadvantage is discriminatory and unequal effects are more described as a disadvantage for more women than men. Women being released for parole or sentenced to probation because it’s harder to find jobs and shelter, in retaining custody of their children and finding programs to help abstain from drugs (Schmalleger pg. 387). Studies show that men being released from prison has a better chance of securing a sufficient income-producing and legal job by virtue of his gender alone (Schmalleger pg. 387).

The advantages and disadvantages of probation and parole. (2016, Mar 27). Retrieved from http://studymoose.com/the-advantages-and-disadvantages-of-probation-and-parole-essay 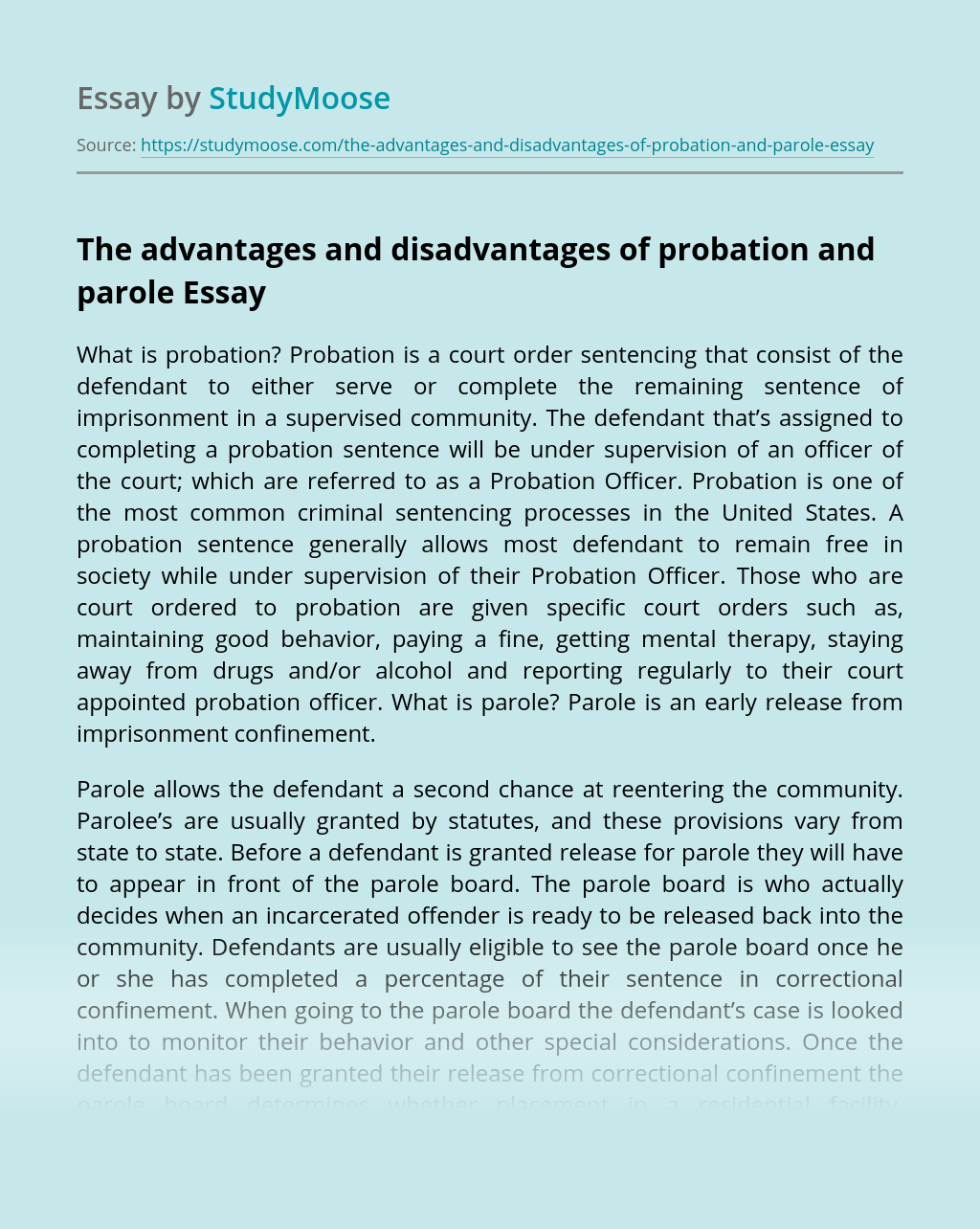