Advantages and Disadvantages of Recommendations to RASB over IAS 38 Intangible

Don't use plagiarized sources.
Get Your Custom Essay on Advantages and Disadvantages of Recommendations to RASB over IAS 38 Intangible Just from $13,9/Page

For instance, a country like Ruritania has a very vibrant stock market but the various three treatments of research and development costs might possibly have negative effects on it. That is why this report explores the advantages and the disadvantages of the recommendations made to the Ruritanian Accounting Standard Board (RASB) over those followed by the International Accounting Standards (IAS) 38. Advantages All R&D expenditures should apply to all the conditions first. When an R&D project starts, the research cost and development cost should be accumulated to a certain account first.

If the project is successful, all the R&D costs should be considered as an intangible asset and impairment as intangible asset, or all the cost should be recognized as expense and amortized in five accounting periods (Deegan 2007). The first advantage of this recommendation is that it encompasses all the three systems at ago, at least at the start of accounting procedures regarding research and development expenditures. There will be eliminated the risk of ignoring the values of the assets within a given balance sheet (International Accounting Standards Board 2007).

A common disadvantage of IAS 38 has been that it has tended to be very definitive and specific on what ought to be include and what ought to be left out of the balance sheet of an organization. This poses the threat of leaving out certain assets which are not able to be clearly distinct. IAS 38 clearly does not allow for any such treatment of research and development expenditures. Instead, it requires that any of the three approaches is adopted – expensing all R&D expenditure, selective capitalisation, or ccapitalizing all R&D expenditure (Deegan 2007).

The other advantage is that unlike the IAS 38 system which puts established companies at a disadvantage due to the risk of losing a significant part of their net worth because of having to get rid of certain assets from their financial statements, the recommendation allows for such companies that are established to benefit by still using their usual approaches at the start. This ensures that there are no companies that can suddenly go under or face the risk of being shunned by investors for suddenly losing their market worth (Kirk 2005).

This type of approach to categorizing intangible assets will also help in ensuring that internally generated brand names and other intangible assets are not treated similarly with those generated externally. This is unlike in the IAS 38 system where there is the risk that brand names that are externally and internally generated will get mixed, failing to tell which is which. Such confusion can impact negatively on a developing nation whose infrastructure is usually largely based on small and medium enterprises (SMEs).

To allow SMEs to grow into big business ventures, a lot of investment is required, which might not be forthcoming if brand names that are internally generated are allowed to lose value. For this particular country, the recommendation to treat expenditures differently is beneficial because it will allow for handling of specific vote heads in the balance sheet (Kirk 2005). There will be a different account for new technologies and products, a factor that will also make it easier for investors in the country’s various sectors to be clear on what and where to specifically put their money.

Disadvantages The first disadvantage is that this recommendation makes it hard for there to be ways through which the costs of assets can be determined. It is always important to know the real cost of an asset before it can be fully and properly included in the balance sheet. This is not possible if there will be a generalization of sorts (International Accounting Standards Board 2007). The IASD 38 system ensures that those assets whose costs cannot be reliably determined are not included at all in the balance sheet.

There has been a problem of tendencies by companies to increase the value of their intangible assets in order to portray to the public the idea that the companies are doing well or are financially stable owing to their many costly assets. The recommendation does not make any attempt at seeking to resolve the issue but instead blows it out of proportion. If implemented, these recommendations will create a situation in nations where every company will be capable of having more than one financial statement at the close of every quarter, half, or full year.

One statement of its financial position will be a genuine one based on the real value of the company, and the other will be a fake one made using inflated asset values. This will create chaos and an unnecessary competition (Kirk 2005). The stock markets for the country will most likely suffer owing to a lot of speculative trading, and the economic growth of the country might be reduced, halted, or even reversed over time as investors are prompted to make investment decisions that are not based on substantive data (International Accounting Standards Board 2007). 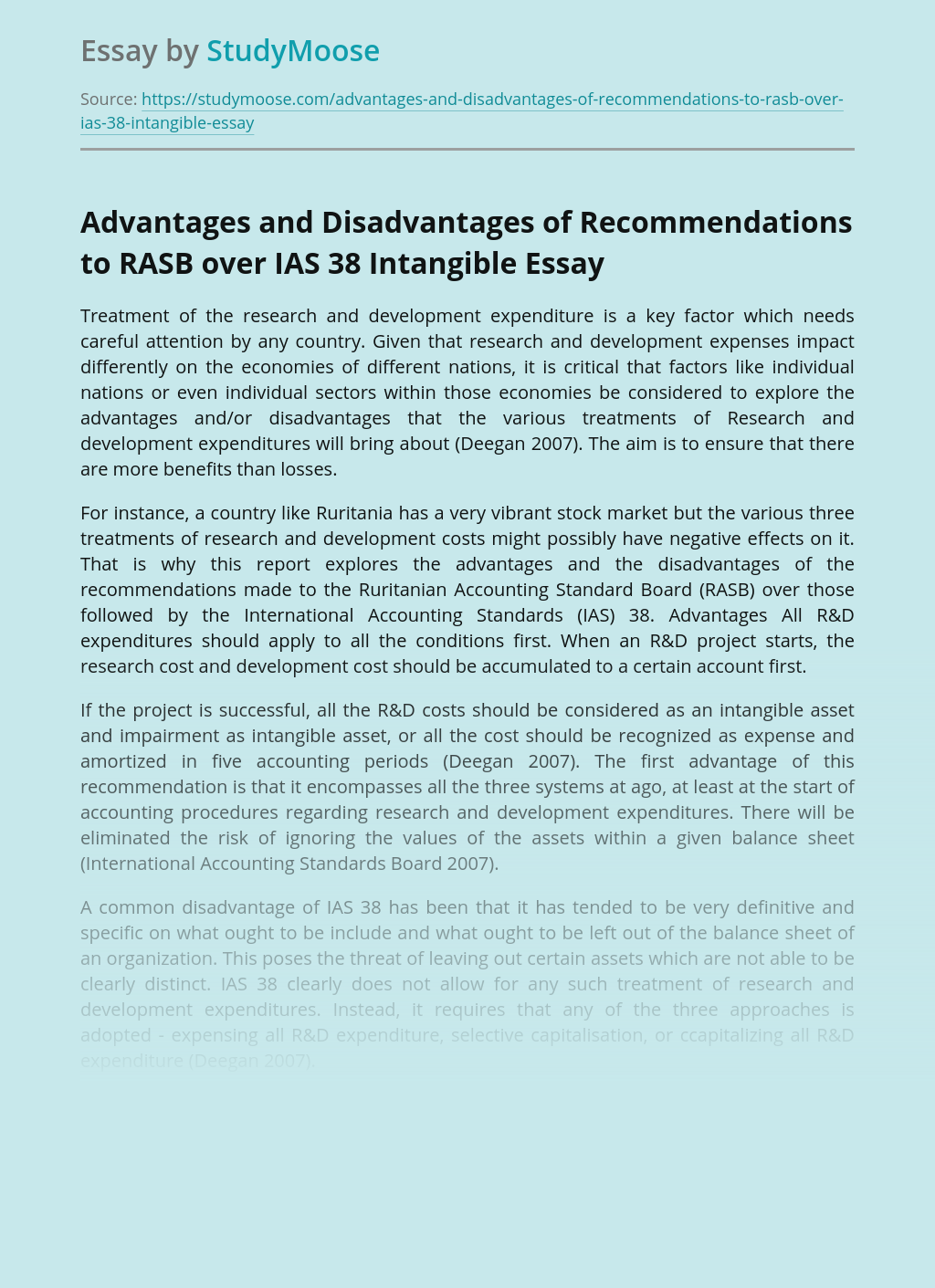 Analysis Ode to Autumn has a very different theme and style in comparison to many of Keat’s other poems. While most of Keats poems contain sharp cadences and emotionally charged themes, Ode to Autumn is a calm, descriptive poem about Keat’s perspective of the season Autumn and its relation to other season. In the Poem...

I arrived to work well rested and ready to start the day. I had just returned after a two week long vacation. Because of the time off, I arrived to 7 East to find that the assortment of patients was not familiar at all. As I began getting reports on my patients, one in particular...

Below is a free essay on “Descriptive Essay – My Room” from Anti Essays, your source for free research papers, essays, and term paper examples. My safe haven, a place I can completely be myself in, a place I can unwind, sit back and just relax: My room. The only space in the house I...

Bad Effects of Drugs Drugs are a problem in all societies around the world, and have been for centuries. Drug addiction causes many of social problems, and causes many people to suffer from its effects. The problems can be divided into three groups: personal, familial, and societal. The first effect of drugs is addiction. Most...

Our modern-day world is developing in a spectacularly ferocious speed in the technological spheres. However, these marvelous advances do not appear all over the world. While scientists create artificial intelligence, 3D-printing, nanotechnologies, others virtually die from poverty. It is difficult to imagine that such an evident controversy exists between economically developed countries and many poor...