Ada Lovelace was born in 1815, and died in 1852 from cancer. Ada Lovelace was the daughter of a famous poet Lord Byron and Anabella Millbank, who also enjoyed math. Ada’s parents were divorced right after she was born and was never able to meet her estrange father. However, her father corresponded with her mother on her upbringing. Anabella Millbank, Ada’s mother, did not want her daughter to be a poet like her father and did everything possible, pushed Ada night and day, to learn mathematics.

Don't use plagiarized sources. Get your custom essay on
“ Early age of Ada Lovelace ”
Get custom paper
NEW! smart matching with writer

Even though Ada’s fond interests were elsewhere, her mother diminished those interests until Ada grew a fondness of math, by no choice of her own.

At an early age Ada met with Charles Babbage in London, and with that Ada first learned of the Difference Engine. This is when Ada Lovelace’s eyes grew with enormous content, interest, and enthusiasm of the invention, which was later known as the Analytical Engine. In her twenties, Ada married her husband (several years her age) Earl William King and soon after, she bore three children.

After having her children she became engrossed and focused on the formulation of the Analytical Engine, which took several years of extensive work, which she loved.

Ada composed a “plan for how the engine might calculate Bernoulli numbers. This plan is now regarded as the first “computer program” (Larry Riddle, p. 1). Ada became ill and was diagnosed with cancer of the uterus and died at an early age, like her father, right after her accomplishments.

Ada’s achievement was shown in her “notes” on Charles Babbage’s Analytical Engine, which was finally acknowledged and “became reality in the 20th century computers which earned her a place in the history of mathematics and computer science” (Britannica Concise Encyclopedia, p. 6). 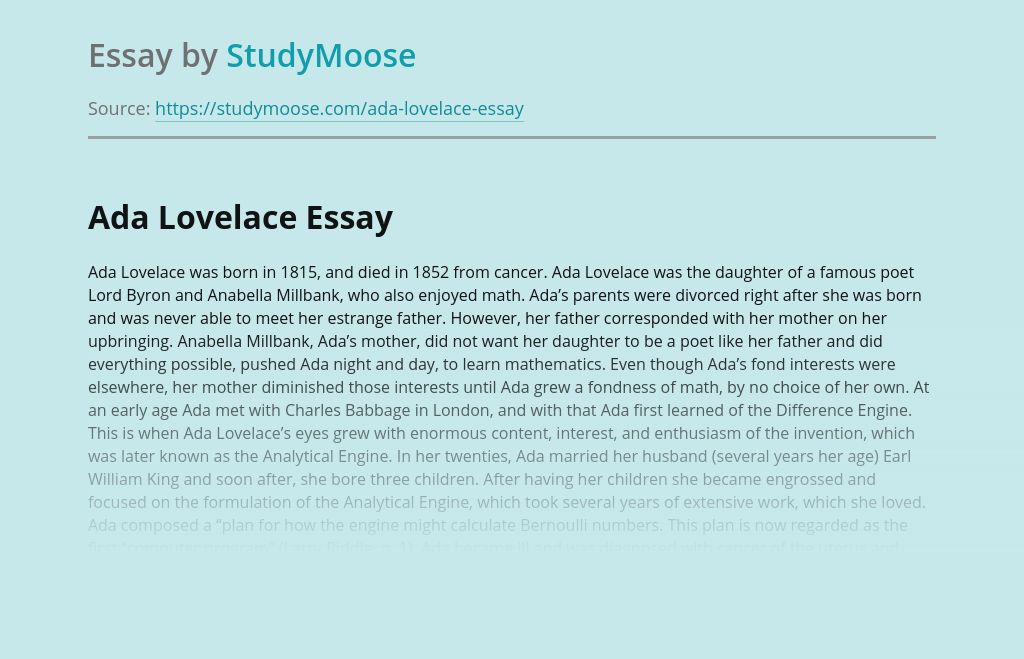