At Act II, Scene IV which begins "When I would pray and think". How does Shakespeare control our changing responses to Angelo throughout this scene?

At the beginning of this scene we see Angelo in a way we haven’t seen him before. He is feeling very trapped by his exterior and wishes he could be a different type of person. This gives us the feeling of pity towards this usually harsh and cold man. Angelo is being very honest with himself in this soliloquy; and he realizes his thoughts for Isabella are of pure lust. This being the main reason as to why he can’t pray, he can’t stop thinking about Isabella.

Don't use plagiarized sources. Get your custom essay on
“ At Act II, Scene IV which begins “When I would pray and think”. How does Shakespeare control our changing responses to Angelo throughout this scene? ”
Get custom paper
NEW! smart matching with writer

However, he desires her only for the things, which make her good, which is why his prayers are so very hollow:

Whilst my invention, hearing not my tongue,

This language mirrors the grossness of exactly what Angelo is considering doing. He becomes aware that he is actually a human being and that so very often his outer appearance belies what is inside him.

Angelo is really beginning to understand exactly what Isabella said to him previously. The person he seems to be is not the person he is at all; he would love to get rid of this “idle plume”, which is there just for vanity as its becoming a burden:

Could I with boot change for an idle plume…”

During this soliloquy Angelo also realizes the disgust of what he is contemplating. He knows it is evil and corrupt and his language portrays this:

“And in my heart the strong and swelling evil

Due to the way Angelo is so open and honest in his soliloquy; one feels pity for him and it could be thought that perhaps he could really have true, sincere feelings.

Indicating that maybe he will not go ahead with these terrible thoughts he has had.

However, once Isabella enters he changes and decides to play games with this innocent girl. He plays verbal games with her, taking advantage of her naivety. She doesn’t realize what he is thinking, therefore it is very unfair of him to do this to her. He mocks her due to her naivety and he places himself above her as though she is a lesser mortal:

“Give up your body to such sweet uncleanness…

…I had rather give my body than my soul”

Angelo doesn’t try to just attract Isabella to him, to give him what he wants. He blackmails her, he tells her that if she does this her brother will live; and if she doesn’t then he will die a painful death.

He talks to Isabella in a disrespectful, mocking tone; he believes he has a license to behave and act any way he wishes to get whatever he wants. This indicates there is no way this man can possibly be trusted, he is clearly dangerous and deceitful:

“Your sense pursues not mine: either you are ignorant,

Or seem so, crafty; and that’s not good”

Angelo then goes straight ahead with saying what he wants; he makes his case very clear. He has played these verbal games with her, confusing and mocking her and now he wants to just tell her exactly what it is he desires. He gives her an ultimatum:

“You must lay down the treasures of your body

To this suppos’d, or else to let him suffer…”

Isabella then uses language, which clearly shows just how vulnerable she actually is. However, she doesn’t realize that the language she uses has sexual tones in it which make Angelo even more determined to get what he wants. Such pity is felt for Isabella because of the enormity of the sacrifice:

And strip myself to death as to a bed…”

Angelo proves that he would exploit anyone, due to the fact that he is exploiting a woman so very pure, a woman who is obsessed with purity.

He is totally unmoved by Isabella’s heartwarming and sincere responses, indicating that he is very cold. He is so very succinct, thus really showing his coldness.

Isabella tells Angelo that men abuse women and take advantage of them, therefore, women can be permanently scarred by men. Angelo however likes to think he is worthy of doing whatever he pleases; this makes him seem very cruel, manipulative and hypocritical:

“We are all frail”

Angelo tries to use love as a way of making Isabella agreeing. He says if she gives him love Claudio will live, but she tells him Claudio loved Marianna and he is to die for it. Angelo is in deep lust for Isabella, but that is not love; he doesn’t understand what love is. He is so very ambivalent, he makes love seem cheap:

“Plainly conceive, I love you”

Isabella thinks she can threaten to denounce him, she threatens to expose him as a seducer. He tells her however; that he has an untarnished reputation therefore nobody will believe her. This is extremely hypocritical due to the fact that he is guilty for even considering abusing her; he exploits his power over her. It is very cruel the way he deals with her, he tells her to do it otherwise he will make Claudio suffer.

Angelo is truly lacking in any compassion what so ever towards the end of the act. Having unleashed his sexual desires he is another person:

“But thy unkindness shall his death draw out

Isabella talks about how people can use power to get what they want; this lets us know just how they can scar people. We sympathize immensely for her and can feel his terrible hypocracy. Angelo’s weakness is portrayed, and Isabella’s strength really highlights this. Isabella ends in a very strong way by not giving in and agreeing to Angelo, therefore Isabella’s strength and Angelo’s weakness are in great contrast. Not only do we feel a weakness appear in Angelo though, as we see his absolute desperation and sexual needs of Isabella by stooping so low:

Or, by the affection that now guides me most,

I’ll prove a tyrant to him”

At Act II, Scene IV which begins "When I would pray and think". How does Shakespeare control our changing responses to Angelo throughout this scene?. (2020, Jun 01). Retrieved from http://studymoose.com/act-ii-scene-iv-begins-pray-think-shakespeare-control-changing-responses-angelo-throughout-scene-new-essay 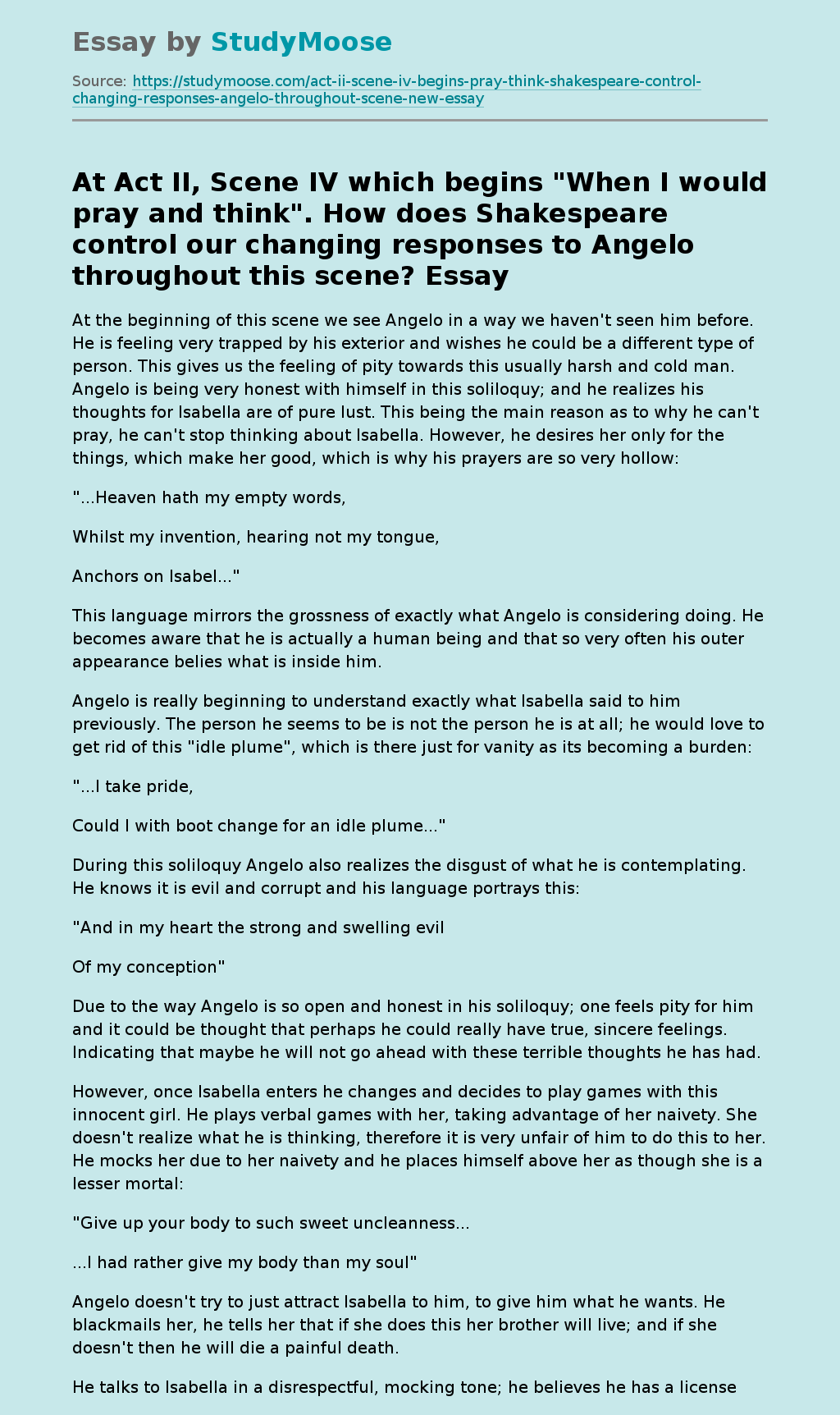