Tata Motors has auto manufacturing and assembly plants in Jamshedpur, Pantnagar, Lucknow, Sanand, Dharwad and Pune in India, as well as in Argentina, South Africa, Thailand and the United Kingdom.

Turn in your highest-quality paper
Get a qualified writer to help you with
“ Abstract to Tata Motors Limited ”
Get high-quality paper
NEW! AI matching with writer

Tata Motors entered the passenger vehicle market in 1991 with the launch of the Tata Sierra and in 1998 launched the first fully indigenous Indian passenger car, the Indica.

Tata Motors acquired the South Korean truck manufacturer Daewoo Commercial Vehicles Company in 2004 and the British premium car maker Jaguar Land Rover in 2008. Tata Motors is listed on the Bombay Stock Exchange, where it is a constituent of the BSE SENSEX index, the National Stock Exchange of India and the New York Stock Exchange. Tata Motors is ranked 314th in the 2012 Fortune Global 500 ranking of the world’s biggest corporations.

To be passionate in anticipating and providing the best vehicles and experiences that excite our customers globally. Vision
Most admired by our customers, employees, business partners and shareholders for the experience and value they enjoy from being with us.

The automotive industry in India is one of the larger markets in the world and had previously been one of the fastest growing globally, but is now seeing flat or negative growth rates.India’s passenger car and commercial vehicle manufacturing industry is the sixth largest in the world, with an annual production of more than 3.9 million units in 2011.

According to recent reports, India overtook Brazil and became the sixth largest passenger vehicle producer in the world (beating such old and new auto makers as Belgium, United Kingdom, Italy, Canada, Mexico, Russia, Spain, France, Brazil), grew 16 to 18 per cent to sell around three million units in the course of 2011-12. In 2009, India emerged as Asia’s fourth largest exporter of passenger cars, behind Japan, South Korea, and Thailand.In 2010, India beat Thailand to become Asia’s third largest exporter of passenger cars. As of 2010, India is home to 40 million passenger vehicles.

More than 3.7 million automotive vehicles were produced in India in 2010 (an increase of 33.9%), making the country the second (after China) fastest growing automobile market in the world in that year.According to the Society of Indian Automobile Manufacturers, annual vehicle sales are projected to increase to 4 million by 2015, no longer 5 million as previously projected. “The production of passenger vehicles in India was recorded at 3.23 million in 2012-13 and is expected to grow at a compound annual growth rate (CAGR) of 13 per cent during 2012-2021, as per data published by Automotive Component Manufacturers Association of India (ACMA)”. The majority of India’s car manufacturing industry is based around three clusters in the south, west and north. The southern cluster consisting of Chennai is the biggest with 35% of the revenue share.

The western hub near Mumbai and Pune contributes to 33% of the market and the northern cluster around the National Capital Region contributes 32%. Chennai, with the India operations of Ford, Hyundai, Renault, Mitsubishi, Nissan, BMW, Hindustan Motors, Daimler, Caparo, and PSA Peugeot Citroën is about to begin their operations by 2014. Chennai accounts for 60% of the country’s automotive exports.[10] Gurgaon and Manesar in Haryana form the northern cluster where the country’s largest car manufacturer, Maruti Suzuki, is based.[11]

The Chakan corridor near Pune, Maharashtra is the western cluster with companies like General Motors, Volkswagen, Skoda, Mahindra and Mahindra, Tata Motors, Mercedes Benz, Land Rover, Jaguar Cars, Fiat and Force Motors having assembly plants in the area. Nashik has a major base of Mahindra & Mahindra with a UV assembly unit and an Engine assembly unit. Aurangabad with Audi, Skoda and Volkswagen also forms part of the western cluster.

Another emerging cluster is in the state of Gujarat with manufacturing facility of General Motors in Halol and further planned for Tata Nano at their plant in Sanand. Ford, Maruti Suzuki and Peugeot-Citroen plants are also set to come up in Gujarat.Kolkata with Hindustan Motors, Noida with Honda and Bangalore with Toyota are some of the other automotive manufacturing regions around the country. Competition: 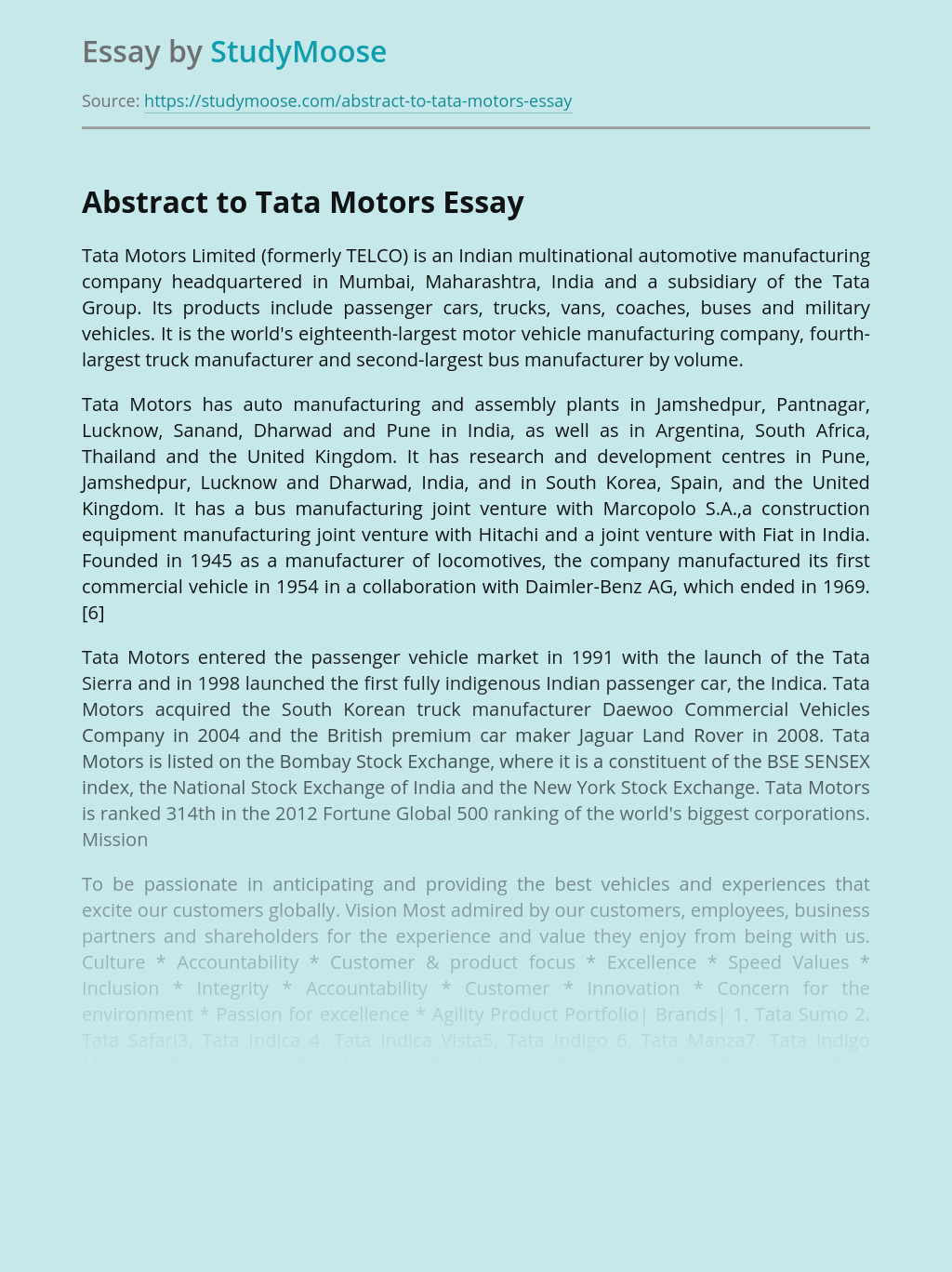 Turn in your highest-quality paper
Get a qualified writer to help you with
“ Abstract to Tata Motors Limited ”
Get high-quality paper
Helping students since 2015
Stay Safe, Stay Original