The traditional ways to cook for aboriginals used to involve roasting their food on hot coals, baking in the ashes & steaming in ground ovens. But today theses things have changed & the aboriginals have easier ways to cook using ‘technology’ from today. They have adapted to make the process easier by boiling & barbequing.

When cooking meat, this was the basic technique, which was almost always used. They cooked most meat, fish & small turtles.

To make sure the meat was cooked through, it was also covered by ashes & coals, which also made tough meat softer.

Turn in your highest-quality paper
Get a qualified writer to help you with
“ Aboriginal Cooking Methods ”
Get high-quality paper
NEW! AI matching with writer

The meat would be eaten quickly after roasting.

Shellfish were also cooked on the coals on the outside of the fire, this way when they started to froth, they could be removed quickly.

Bread & damper was cooked in the ashes. When aboriginals made fires, they made sure they used the right kind of firewood, so that after the fire was out, the ashes could be used for cooking their bread.

They were very careful as to which wood they used because some woods made to bread taste bad & some caused irritation & discomfort. Over time, it was the wattle seed that was found to be the most successful for cooking. It gave no bad taste, gave no one irritations & produced a fine ash.

Witchetty grubs only needed to be quickly rolled over the ashes to be cooked. Then damper was put beneath the ashes & then covered. To cook yam, or vegetables, they would dig a small hole, place the vegetable in it, and then cover it with ash.

In the Wiradjuri areas, steam ovens still exist. The ovens were made by digging a hole in the ground, they were about 90cm long, & 60cm deep. The clay left over from digging was then made into smooth lumps & then would be placed on top, once the hole was filled with selected firewood. While the wood burned, the clay became hot. The clay would then be removed with tongs. The pit would be swept out & then lined with still green leaves & grass. Then meat such as possums (because they were small enough) would be lain inside, covered with more leaves & then the clay would be placed on top.

To stop the steam escaping, the ground that was originally taken out when the hole was dug covers the clay.

Wrapping is still used in places like Arnhem Land. Vegetables are wrapped in the moist paper bark from Melaleuca trees & then placed in ground ovens.

Today Aboriginals use more advanced methods of cooking. They have adapted their old ways to make them easier.

Aboriginals have now learned to boil foods in galvanized cans, tins, steel drums or whatever items are available. Because of this, ground ovens are being used less & less.

Although the Aboriginals don’t have top of the range barbeques, they have got their own version. It is simply a piece of wire to hole pieces of meat or dough over red coals.

Although the Dreamtime was in the past, it is the Aborigines religion & culture that rules them today. The saying, ‘As it was done in the Dreamtime, so it must be done today,’ dominates all aspects of the Aboriginals lifestyle & actions. According to some Aboriginals, the Rainbow Serpent made the world. It is their belief that that is true. Religion is some peoples’ way, spiritualism is theirs.

The Rainbow Serpent came from the Northern Territory while Australia was still in its dreaming stage. It traveled over the country, creating the mountainous locations by pushing the land into many ranges & isolated areas.

The Great Dividing Range is a creation of the rainbow serpents movements. Throughout its journey over & under the land, it created rivers, valleys, & lakes. It was also careful to leave many areas flat.

Once it was satisfied with its creation of Australia, spirit people came from inside it & moved all over the country to form many different lifestyles, languages & different stories.

When the land was finally finished, it was ready for people, but there were none .Walya-Nam-Adiki was the woman who walked out of the sea & met up with a tribal man. Seen as there were no people, they talked about the problem with having such a wonderful land, but no people to live there. To fix this problem, they had many spirit children together. Walya-Nam-Adiki told all her children to go to all different places across the country & to speak new languages, make & keep land & water management. They were to stay in their chosen areas, & to make social & kinship systems which would make sure that there would always be people within their tribal boundaries.

Other Aboriginals believe that when the world first existed, that giant semi-mortal beings that resembled plants & animals rose up from the flat land where they had been sleeping for countless ages.

These beings wandered the land aimlessly. As they roamed around, they performed the tasks that Aboriginals do today. These included camping, making fires, digging for water, fighting each other & performing ceremonies. When they became tired of carrying out these rituals, the dreamtime ended. Wherever the creators had been, a natural landform now marks the place. The creators made everything which Aboriginals are in contact with everyday & from which they gain their living. Apart from forming the land, they also created the laws that govern the aspects of everyday life, which some Aborigines still live by.

Indigenous rates of imprisonment in adult prisons varied between about 4* times the non-indigenous rate in Tasmania & up to over 20* times in Western & South Australia.

At almost any time, up to 80% of inmates in Northern Territory ‘Correctional Facilities’ are of aboriginal descent. Whatever the intent, mandatory sentencing has more effect on aboriginals than any other ethnic group in the NT.

Also Police custody rates for Aboriginal & Torres Strait Islanders was 26.2* times more likely than people of other races. Aboriginals are 25% of people that are arrested & 15% of people who are in jails are also Aboriginal.

Aboriginal people are 12 times more likely than others to be in prison for homicide and 16 times for breaking and entering.

One principle factor is that of the low status of the indigenous side of Australia in socio-economy & culture.

On 10th February, 2000 a 15 yr old boy committed suicide in the Don Dale Correctional Facility in Darwin. He had a mandatory 28jail sentence for petty theft of pens, pencils & paint. He was due for his release 4 days after his death. The Northern Territory Chief Minister simply swept aside the death & gave a statement “There will always be deaths in custody.”

The death of the boy & the Country Liberal Party refused to even consider the re-appeal of the mandatory sentencing laws sent a break of outrage through many leading Australian, International & Aboriginal groups.

Two weeks previous to the death, a Federal Senate traveled to Darwin, to make a report on the laws. None of the Country Liberal Party’s officials was prepared to give evidence at the hearing.

The United Nations blasted Australia over these laws, & the treatment of the indigenous people to this land. Also saying that Canberra could be in breach of the UN Convention to Eliminate Racial Discrimination. 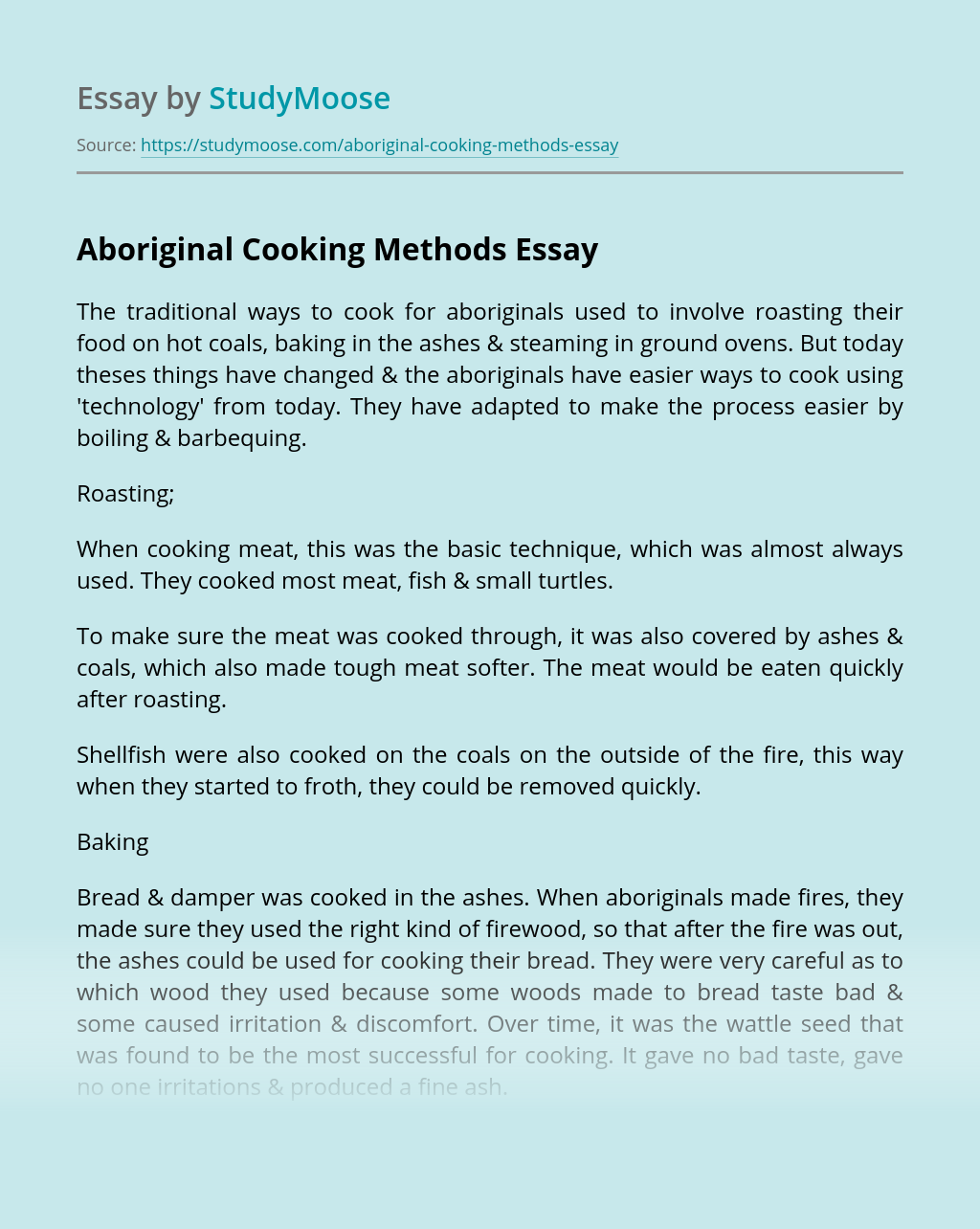 Turn in your highest-quality paper
Get a qualified writer to help you with
“ Aboriginal Cooking Methods ”
Get high-quality paper
Helping students since 2015
Stay Safe, Stay Original