Abnormal Behavior Is Defined as Behavior That Is Not Normal

Abnormal behavior is defined as behavior that is not normal; what does that mean? How do we know if behavior is normal or not? The field of psychology uses four distinct definitions to define abnormal behavior, these are; Statistical Definition, Social Norm Deviance, Subjective Discomfort, and the Inability to Function Normally.

Don't use plagiarized sources. Get your custom essay on
“ Abnormal Behavior Is Defined as Behavior That Is Not Normal ”
Get custom paper
NEW! smart matching with writer

We look at emotions and we observe how the majority of the population acts when they are sad, we compare the expressions they have, the words they share with other members of the population when they are sad; if one group shows more severe emotions than the other then we would say they are behaving abnormally; for instance, if when sad some individuals say they want to kill themselves we would say that is not a normal phrase that comes from someone who is sad.

Because of this I would suspect that they as a social norm are generally sadder than the social norm in Florida. If we compared the population in northern Canada to the population in Miami Florida, with respect to how sad they are, it wouldn’t be an accurate comparison, similar to comparing apples to oranges; they are both generally round but cannot be accurately compared. Subjective Discomfort is a good sign for abnormal behavior. When a person experiences emotional distress or discomfort when behaving a certain way we can assume that the behavior is not normal.

I remember once I was at a bus stop in Boston and I asked one of the attendants if the bus I was next too was the correct bus to where I was going. He started hitting himself in the head and kept repeating “yes the D bus, yes the D bus” This distress he was experiencing from answering my simples question was very abnormal in my view, I can use Social Norm Deviance, also, to say that this individuals actions were not typical of those behavior exhibited by the social norm when asked a simple question.

The inability to function normally is seen as a behavior which doesn’t allow a person to handle the daily activities of functionality; activities such as; walking down the street, talking to another person, not being afraid of every snake or spider that they come across. The ability to function normally, as seen by the norm of the population, is critical to living in this world. If individuals cannot function normally they will not be able to hold a job, will not be able to converse with other, they will be labeled as abnormal.

Abnormal Behavior Is Defined as Behavior That Is Not Normal. (2017, Feb 16). Retrieved from https://studymoose.com/abnormal-behavior-is-defined-as-behavior-that-is-not-normal-essay 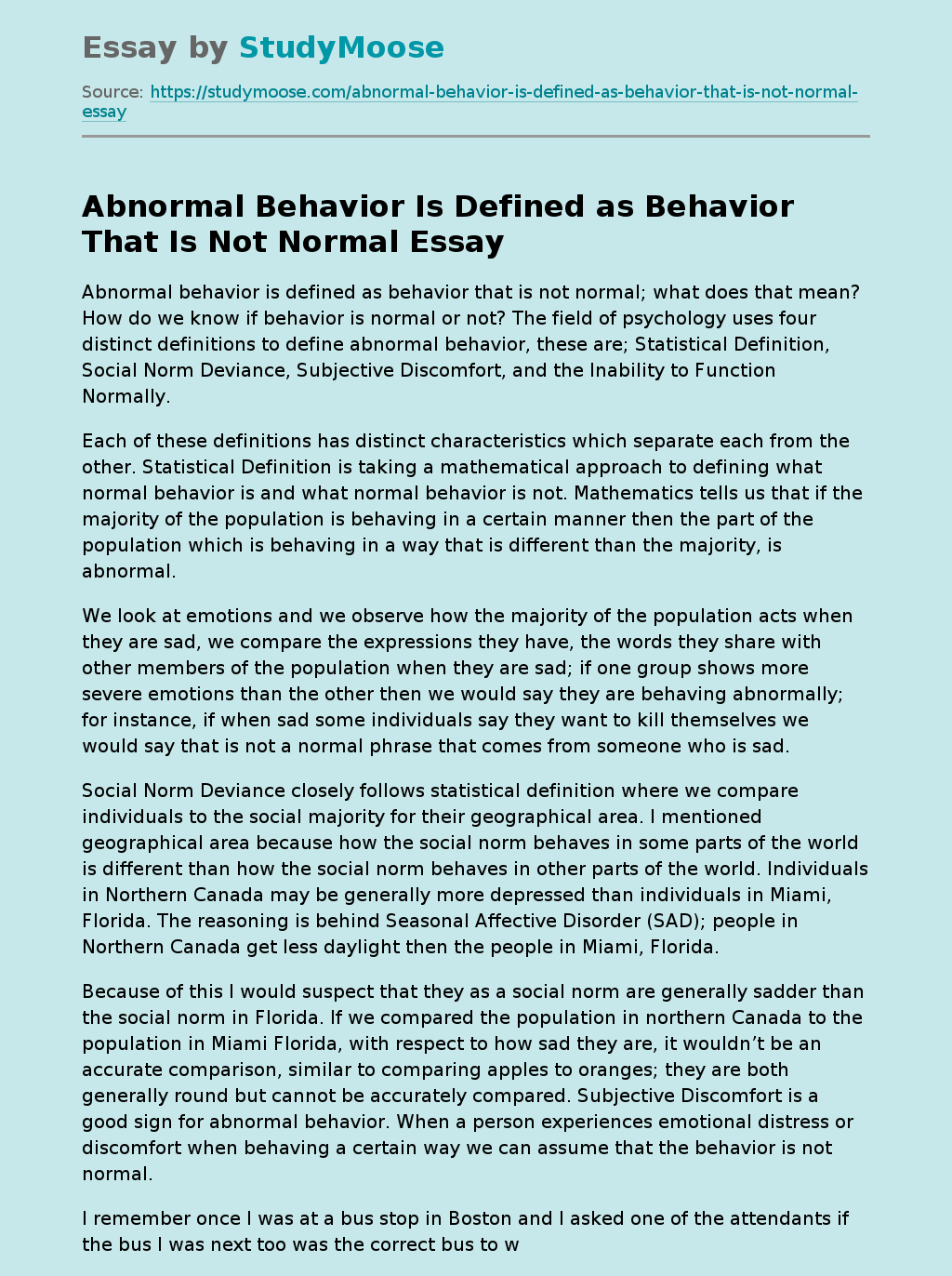