A Schenkerian Analysis of Preludio from Bach’s Unaccompanied Violin Partita

Very few theorists touch upon the topic of motivic and structural coherence in Bach’s dance suites. The keyboard and lute suites deservedly have more published analyses than the string suites – considering there are simply more of them – leaving the cello and violin suites pristine and practically untouched, and unjustifiably so. The most obscure are the violin suites, particularly the BWV 1006 in E major. With the exception of the well-known published analysis by Schenker of the Preludio, Carl Schachter’s analysis of the Gavotte en Rondeaux, no other analysis can be found of this partita.

Don't use plagiarized sources. Get your custom essay on
“ A Schenkerian Analysis of Preludio from Bach’s Unaccompanied Violin Partita ”
Get custom paper
NEW! smart matching with writer

Building on Schenker and Schachter, I present my own Schenkerian analysis of the Preludio. With the help of David Beach’s book on unity in Bach suites and Joel Lester’s book on Bach’s solo violin works, I address motivic and structural coherence in this partita with some observations that apply to all of Bach’s violin suites. Bach composed six unaccompanied works for the violin in the year 1720, three Sonatas da chiesa and three Partitas.

The “partita”, as understood during Bach’s time, was a set of variations; as one might infer, this definition implies that some or all movements of each partita are variations of each other.

The BWV 1006 has seven movements and the only violin partita that begins with a prelude. David Beach addresses the first two of three violin Partitas in his book, observing the importance of the neighbor motion as a motivic pattern in the first and second Partitas. I wish to call attention to the great significance of the neighbor motion that is present in the third Partita as well.

The Preludio opens with a lower-neighbor figure E-D#-E, and the figure occurs within every modulation. It’s noteworthy that Urlinie itself, in fact, contains an incomplete neighbor.

The Gavotte en Rondeaux is the literal embodiment of the variation concept. Being the only violin partita with a Rondo movement, the notion that a partita is a set of variation is most evident through this partita. Regarding Gavotte en Rondeaux, Carl Schachter suggests that as the episodes increase in complexity, the ritornello seems more and more parenthetical. In a sense the two episodes can be organically linked over the ritornello, and thus the concept of the Rondo is realized even more so beyond its surficial sectionalized design.

Continuing with this notion, I suspect that as a whole, the movements of BWV 1006 can be linked together specifically because it is a set of variations, despite its superficial differences. Structural coherence of the partita can be inferred from the Preludio. The piece is typically heard as two sections that are quite similar, while this division seems insignificant, it suggests a subtle element of variety. Being a prelude, it would not be presumptuous to assume either one the two things: the other movements will have similar two-part divisions, or other movements will also have varying sections.

To facilitate an in-depth analysis of the Preludio, I have produced foreground and middle ground graphs. However, I made my graphs after consulting Schenker’s own analysis of the Preludio. As one of Schenker’s earlier analyses, it is noteworthy that he reads the Urlinie as an 8-line; this octave-line interpretation creates more problems than a reading from 3. However, the basic, fundamental idea Schenker presented provides a blueprint for a reading, which, in my view, is more accurate. Schenker offered FIG. 1 in conjunction with the 8-line Urlinie, without specifying exactly what the relationship is.

I propose that Schenker intuited the significance of the neighbor motion in the Urlinie, and read 8 as a cover tone. From Schenker’s figure above I present my notion of the incomplete upper neighbor [FIG. 2]. The de-emphasis of the returning 3 as a passing tone from 4 to 2 lends importance to the incomplete upper neighbor A, supported by IV. This self-contained tonal area stretches over half of the Preludio. A reprise of an opening passage at the initiation of the A prolongation gestures its independence from its surrounding, indeed a smaller organism enveloped within the larger animal.

This is evident through the internal auxiliary cadence to A that accompanies the tonal area IV. In retrospect, the IV is already a long-term goal from the beginning. The first 58 measures properly set the stage for the emergence of IV. The first step on the path to IV is the movement to VI as a short-term goal. This is done by first moving to G# (m. 39) through F# (m. 37), creating a third progression E-F#-G# in the process. The G# is employed first in the top voice as primary tone and then in the bass as pedal point, also the fifth to the incoming C# (m. 51) [FIG 4. EX. 1].

The C#, in a sense, is a midway stopping point from E major on its way to A major. A# in measure 53 leads to B, creating yet another third progression G#-A#-B. The B is to be read not as V of E but as II of A, unfolding to tonic through two consecutive fifths B-E-A [EX. 2]. As we shall see, the contour of the bass forecasts what is to come; additionally this prelude within the Preludio presents the material for further elaboration and development. Now firmly in A, a memorable passage from measures17-28 is restated in the new key, as though a second beginning.

This reiteration casts upon listeners a sense of home, even though the music has strayed to a new tonal area. As I stated before, the 58-measures prelude will matured and grow in its new environment. The bass progression moves in the similar contour as the early 58 measures. The F# (VI) in the bass being a third below A, serves as a short-term goal as a midway stopping point on its way to D# (V65). The long-term relationship between A and D# results in a tri-tone which intensifies the arrival of V [E, 4].

As the seventh of B resolves to G#, B leaps a third to D#, which then is registrally shifted to a lower register through arpeggiation. The low D# then compose out a D#7 chord reaching a high A, thus the end of the internal Urlinie is reached. It should be noted that Schenker pointed out a large-scale voice exchange, consisting of B and D# between measure 120 and measure 128 [see foreground graph pg. 8]. The V in the bass arpeggiation is now approached with utmost anticipation as the weight of the entire Preludio shifts upon its imminent arrival; with only a few measures left, one has to onder in what magnificent way the V will be executed to counterbalance the monumental build to the IV? As the internal Urlinie is fulfilled in measure 131, two descending third progressions in parallel sixths [E, 7] bring forth the most dramatic, German style of violin execution: one dotted quarter B7 quadruple stop that brings the Preludio to a single halt, as the V is finally in place. The effective but swift gesture is sustained by A, the seventh, no longer an incomplete upper neighbor but supported by V. As the A moves through G# to F#, a 7-6-5 motion is created over V as Urlinie scale degree 2 is reached [E, 8].

The bass returns home to its original tonic E in measure 137, and the Urlinie is satisfied as well with E in the treble. The last two measures are coda, finishing the piece in a similar manner as it opened, unfolding itself back into the high E through two octaves. Extended bow technique is demanded to perform the Preludio, perhaps more so than the other movements; but that is not to say the big shifts and the frequent adjusting to unconventional positions is any more comfortable for the left hand. The consistent stream of sixteenth notes in a fast ? nvokes immediate association to a keyboard prelude. Furthermore, the multiple voices created through exploiting the full range of the instrument allows for keyboard features such as pedal point, register shifts. Combined with multiple subject entries and modulations, this piece contains mature Baroque characters of a Bach keyboard prelude. Ironically, Bach wrote such a prelude for a most unsuitable instrument, perhaps with the knowledge that only with correct and virtuosic execution can its full intended effect be achieved. As I begin to understand the purpose of each note, I play the piece better.

Mindless playing and practicing is unfulfilling and futile, and can only produce the most stiff and lifeless imitations of music, if I may quote Schenker. As for the issue concerning unity in all of Bach’s work, both Lester and Beach discussed first two violin partitas at length but strangely failed to address the last partita, I think the research on this topic remains incomplete without consideration of this partita. It would be interesting, if not absolutely necessary to look into the rest of the partita to see what it has to offer. 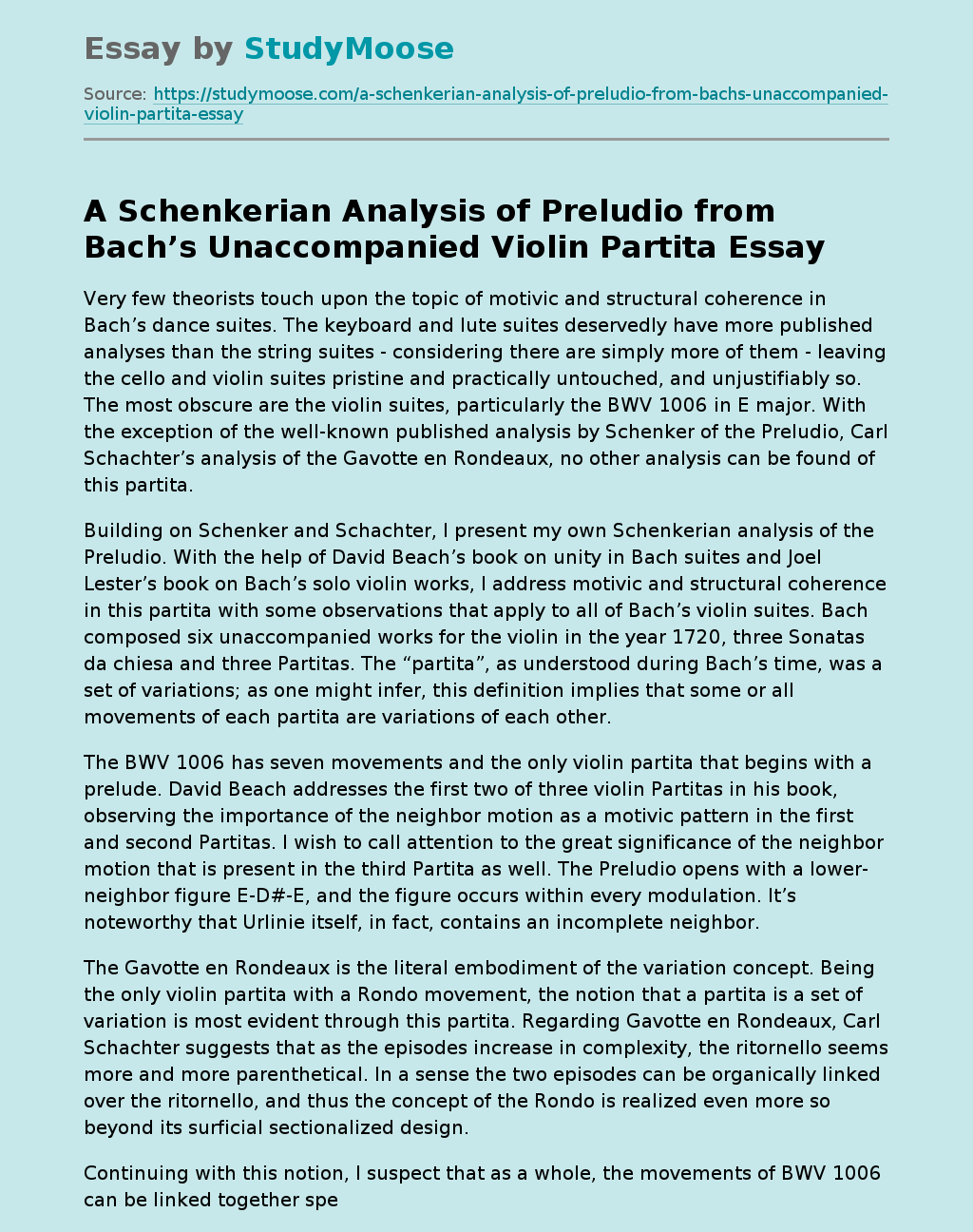