A Narrative Report on the Mass Training for Grade

The K-12 Curriculum for the Grade 3 teachers was indeed a very successful one.

The training was started with smiling faces shown by each participant. This is a manifestation that the Grade 3 teachers are willing and ever ready to embrace the mission tasked by God; and that is to implement fully the K-12 Curriculum with your minds, hearts, and souls. The Mass Training for GRADE 3 teachers on the Basic Education Curriculum started on May 18, 2014 in the afternoon. Delegates from the different schools in the Division of Tuguegarao City were made to register before the start of the sessions.

Don’t waste time
Get a verified writer to help you with A Narrative Report on the Mass Training for Grade
Hire verified writer
$35.80 for a 2-page paper

Dr. Benito Alipio, the Asst. Schools Division Superintendent of the division gave his opening remarks and he emphasized that a twenty -first century teachers must learn, unlearn and relearn the skills needed to produce a twenty-first century learners who are equipped with 21st century skills such as information media and technology skills, learning an innovation skills, communication skills and life career skills.

Dr. Gilbert N. Tong, the Schools Division Superintendent, CESO VI, gave also his inspirational message. He really inspired us, teachers, to do our share in developing a 21st century learners who are developed with adequate knowledge and skills that readily translate into performance.

Dr. Rommel Costales, the Education Program Supervisor in Filipino, discussed about the K to 12 Curriculum. He introduced the Secretary’s message on K to 12 Updates and he further emphasized on some important issues regarding the curriculum. Mrs. Vilma Darisan, Principal II, of Tagga-Dadda Elementary Schools, was the last speaker and she talked about the “Assessment”. She discussed comprehensively her topic. We ended the Day 0 full of enthusiasm.

Day 1 started with a simple program led by Northeast District.

It was started with a prayer then followed by the singing of the national anthem. The delegates in every district introduced themselves with their own creative way of presentation that made the session enjoyable. Dr. Janette M. Dulin, Principal IV of Linao Elementary Schools, lectured on the “Grade Three Learners.” She gave us informative lecture which made us clearer understanding on the characteristics of grade III 21st. century learners. The participants performed different activities during her lecture. After her lecture, she sub-divided the whole group into 2. Each group went on their respective assignments. Class A started their session on “Leveling of Expectations” done by Mrs. Lou Marie Miguel, Principal II of Larion Alto. She gave emphasis on the expected attitudes that each participants must possess.

On the other group, Class B, was led by Mrs. Liezel Santos and disused the same topic. Mrs. Juliet B. Alan, Master Teacher I of Annafunan Elementary School, lectured comprehensively about the Araling Panlipunan subject. The participants actively participated on the different activities during her session with them. Mrs. Eleanor Cacacho and Mrs. Zenaida Rivamora, EPS I in Science and Social Studies, with Dr. Rommel Costales, EPS II in Filipino witnessed her lecture. Mrs. Lou Marie Miguel, Principal II of Larion Alto, lectured the Science subject. She really gave us a substantial lecture. Mrs. Analyn Quilang, Principal II of Pengue Ruyu, tackled on the “Edukasyon sa Pagpapakatao.” She delivered also her lecture with enthusiasm. On Day 2, Class A had their MTB with Dr. Janette Dulin as the first speaker while on Class B, Mrs. Catalon, lectured on Music. Both speakers delivered their topic energetically and substantially.

On the same day, Mrs. Evangeline Palejo, tackled about the English subject in Class A while Mrs. Analyn Quilang lectured on ESP in Class B with the presence of Dr. Norma Guillermo, Chief Education Program Supervisor in Elementary Division. Dr. Guillermo felt happy with the positive feedbacks she received on the performances of the trainers as well as the participants. Day 3 (May 21, 2014), the session was chaired by the participants of the West District. Same preliminary activities were made to start the day’s session. The first lecturer was Dr. Janette Dulin. She continued her topic regarding the MTB in Class A intelligently as manifested with the active participation of the trainees.

On the same time, Mrs. Vilma Darisan presented her topic in Math. She discussed her topic enthusiastically in Class B. The trainees listened and focused themselves intently during her discussion. After which, Mrs. Catalon, and Mrs Vilma Darisan lectured on Music and Mathematics in Class A and b respectively. With their expertise in presenting their subjects, they and the trainees enjoyed together their sessions. Liezel Trumata, the trainer in Health, then followed by Mrs. Juliet Alan who tackled about the Araling Panlipunan in Class B also discussed their topics intelligently. On the fourth day ( May 22, 2014), the first lecturers are Mrs. Liezel Trumata and Mr. J. Attaban who taught Health and P.E. respectively in Class A and B. Luckily, Mrs. Santos, was observed by Dr. Venturada Durian and Mr. Gayagoy both DepEd officials in the division while Mrs. Evangeline Palejo discussed her topic in English in Class B.

Demonstration teaching was done right after the last trainers had done their lectures and it was done in the afternoon and continued on the fifth day. The following demonstration teachers were; Mrs. Emily Guiquing, MTB, Mrs. Emma Calimag, Math, Mrs. Norolaine Cabalos, Araling Panlipunan, Mrs. Salvacion Cabalza, Science, and Mrs. Jane Carino, P. E. All the demonstration teachers performed well and showed their own creative way in teaching their subject matters. The pupils were responsive and actively participated in the different activities tasked by the teachers. After the demo-teaching, a critiquing was made to the teachers with their respective trainers. The training was completed when Dr. Rommel Costales, Education Supervisor II in Filipino, the last lecturer, presented his topic about the ‘Commitment Building.’

He elaborated further his topic by asking the trainees to note down four key words about their leanings on the k to 12 Curriculum with the use of a paper airplane. Everyone enjoyed much the activity. He further strengthened the leanings of the participants through a video clips about a teacher-learner relationships which touched the hearts of each participants. As we went through day by day with this training, we were enriched and enlightened with the new insights and concepts that were needed to achieve the Goal of the K-12 Curriculum and that is to become the 21st Century teachers producing multitude 21st Century learners – the hope of the future generation that could help our department, the Department of Education, be the topmost agency in our country and make our country progressive, globally competitive and at par with other countries. The training ended with a simple closing program but with full baggage of learning on the part of the trainees as well as the trainers.

A Narrative Report on the Mass Training for Grade. (2016, Apr 11). Retrieved from http://studymoose.com/a-narrative-report-on-the-mass-training-for-grade-essay 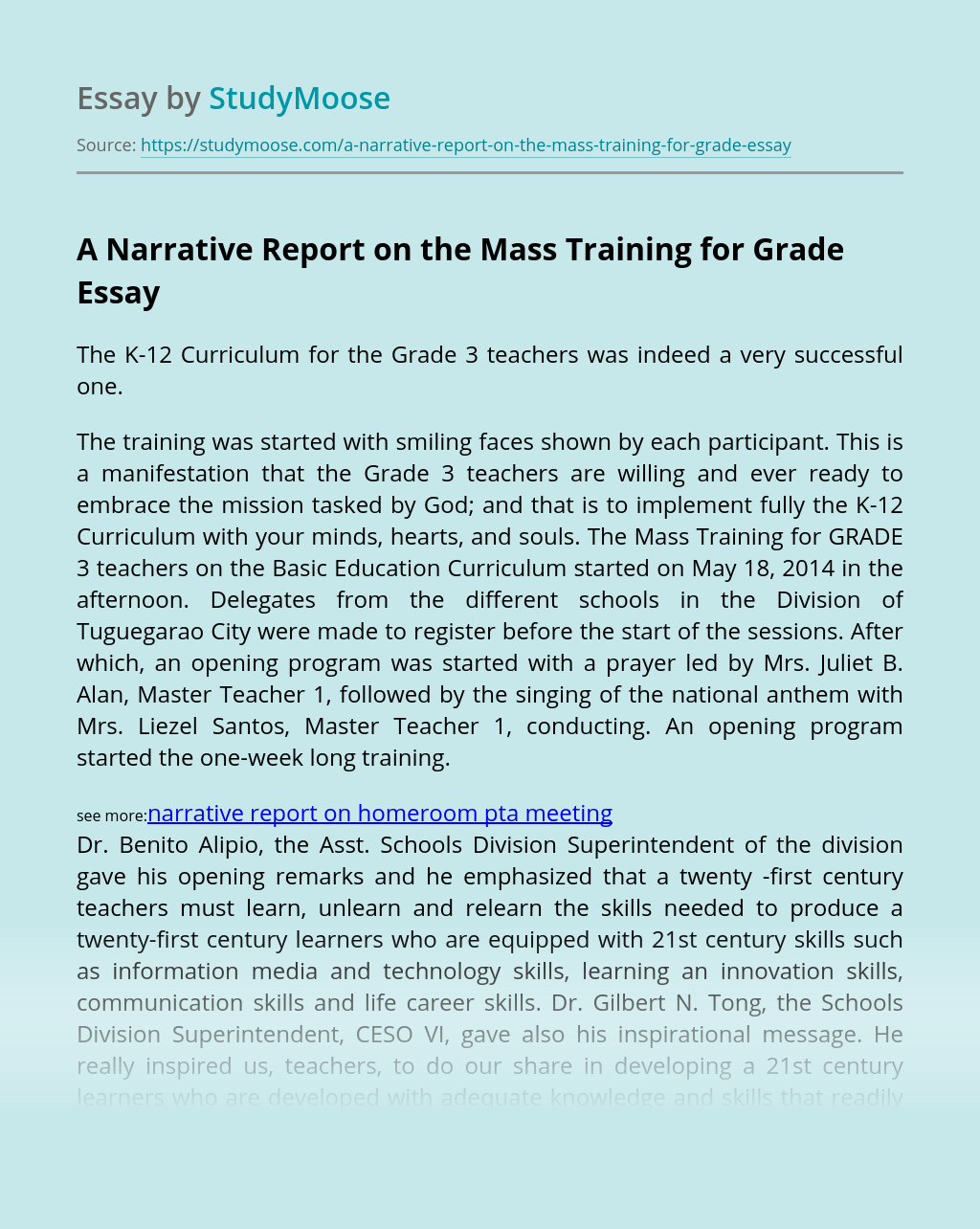 Don’t waste time
Get a verified writer to help you with A Narrative Report on the Mass Training for Grade
Hire verified writer
$35.80 for a 2-page paper
Stay Safe, Stay Original