The entrance to the field was blocked due to the large masses of crowd who came to support their respective teams. The crowd was wild with excitement. The environment was breathtaking. The Mexican wave was flowing from one end to the other. The crowd was shouting their heart out. Every individual was cheering his country in his own unique way. Vuvuzelas were filling the air with an exotic feeling. Crowd was wearing the respective colors of their country’s flag. Face-paintings, unusual caps and hats and an amalgamation of colorful accessories gave variety to the green colored field.

Don't use plagiarized sources. Get your custom essay on
“ A Football Match ”
Get custom paper
NEW! smart matching with writer

Then the visitor team’s anthem was played and the supporters of the visitors, somewhat less than the home crowd but enough to make their presence felt, cheered their team with the conclusion of the anthem.

This marked the start of the handshakes between the players to show their sportsman’s spirit. The players already warmed up by the crowd’s cheering took some pre-match strides to loosen up their muscles. The home team, winning the toss, chose to start of the proceedings of the match.

As the referee’s whistle sounded, the game started with a light touch to the ball by the striker to the player close-in and then the long pass to the defender at the back started the battle of self-control, discipline, control and will-power. The first ten minutes seemed like the passing practice for both teams.

Possession gained and lost was the banner of the first ten minutes. But every pass by the players was being wildly cheered by the crowd. At the end of the twentieth minute the crowd went down on energy and the game started to seem monotonous, but eventually a long pass to the home team’s striker woke up the crowd. The striker came one-on-one with the goal keeper, an overstep dribble by the striker took the goal keeper to the left and the football to the right and then a little flick from the foot of the striker made the football kiss the bottom right corner of the net.

Alas! The dead lock was broken, the striker celebrated with a summersault and the fellow players jumped on him to show their joy. The coach on the sideline was jumping with delight like he has just won a million rupees in a lottery. It took them a couple of minutes to regroup from ecstasy. And the game started again. This time the aggression came from the visitor’s side. They constantly attacked the home team’s net. A couple of half chances gave the visitors crowd some moments of hope, but the efforts were not prolific and the first half ended with a score of 1-0.

They came out with the formation of three defenders guarding the nets and the reamining force attacking vigorously. The strategy paid off as the fifth minute of the second half produced an equation of 1-1. A midfielder was brought down very harshly by the home team’s player on the edge of the penalty box. A yellow card was shown to warn the player who went away nodding angrily that it was a fair tackle while the visitors set up to take the free kick. Their free kick specialist stood in his bookmark style. He had one look at the ball and the whole focus then was on the top left corner of the net.

As the wall was formed the keeper was shouting to place the wall correctly to block of the assault. With the sound of the whistle the free kick specialist took three long strides, his toe met the football on its bottom left part, the ball became air borne, the keeper thought it was going out but eventually it dipped and eureka! The crowd went untamed with enchantment. The visitors were enjoying the moment, their coach happy but still not celebrating much because he knew that the job was just half done and the home team was in a distress.

Proceedings of the remaining part of the second half started. Passes here and passes there was the label of the next twenty five minutes. Players seemed to have drained out of energy. The home team thinking that a draw isn’t that bad after all, the visitors thinking we are not loosing at least. But then came the point of epic importance. The goal kick by the visitor’s goal keeper met the head of a midfielder at the half line. The header was directed by the midfielder to the striker who was standing un marked at the right corner of the penalty box.

The striker took a blink of an eye to shoot the ball in towards the right side of the nets and the keeper was proactive enough to read his mind and was already standing near the right corner of the net, but the power and the spin on the ball was so dynamic that the keeper was forced to punch it back. The ball went to a player from the visiting team and he faced a strong retaliation from the home team’s defender, but strong in mind and even stronger physically he went toward the ball which was in mid air.

His focus was never lost, his eyes were determined to make the ball kiss the nets and this unprecedented approach gave him the mental strength to decide what to do with the ball. And what he thought was what he did. Flying into the mid air he gave him himself a twist of 180’ and produced a bicycle kick which took the keeper by surprise and the ball was forced into the nets the second time around by the visitors. The crowd was on its feet, the players equally celebrating and the coach now celebrating joyfully too because he knew that the game was nearly finished.

The score board showed the score line as 1-2. The last 10 minutes showed no signs of come back from the home team the crowd was starting to leave the ground. And the end of the match came with the whistle from the referee. The visitors were joyful while the home team was shattered. The game taught the lessons of self-believe, control and patience and portrayed that winning or losing is a part of the game. What really matters is that u fight till the last moment because u only loose when u give up. 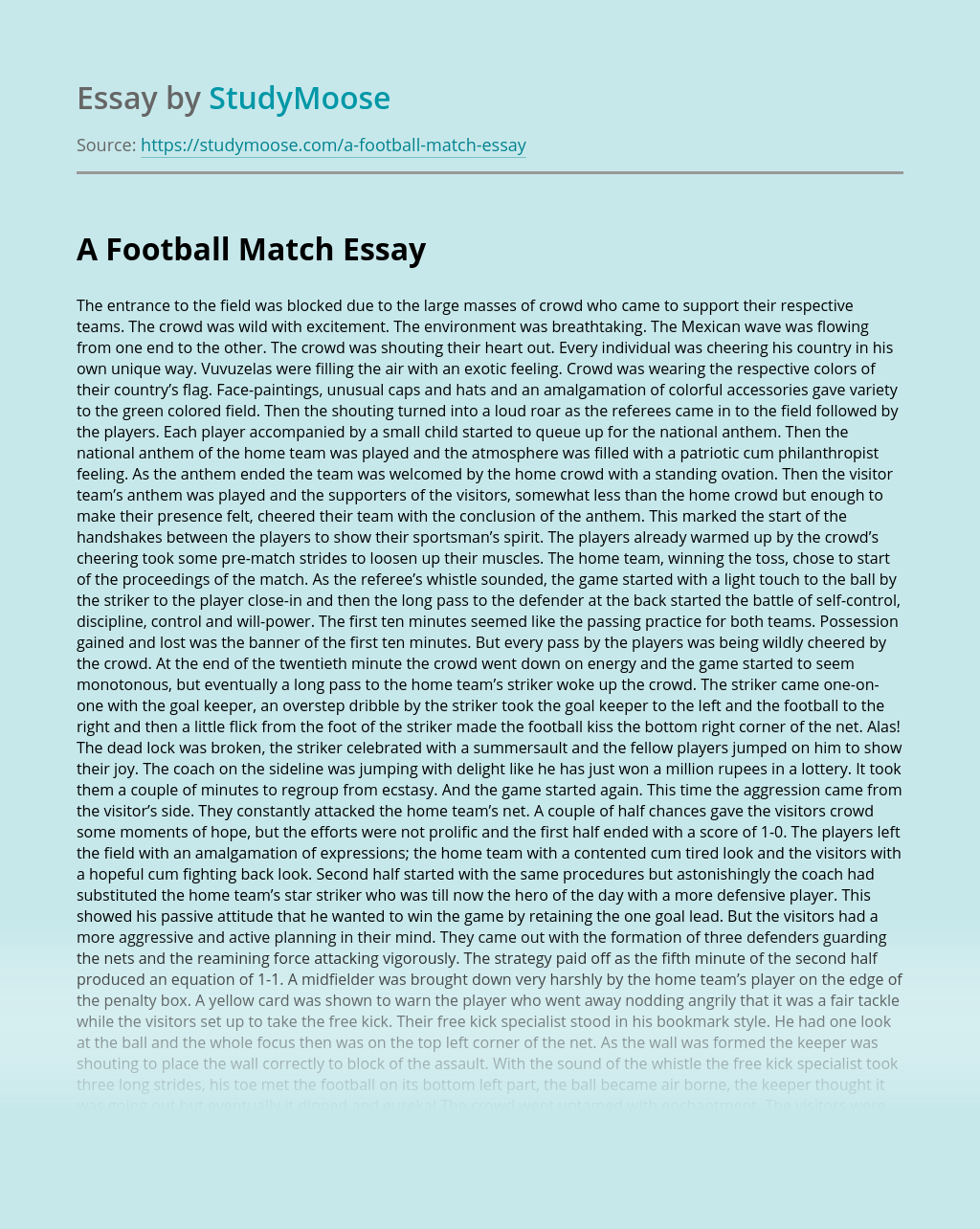