"A Farewell to Arms" by by Ernest Hemingway

In the outset of the novel, Frederic is portrayed as being spiritually mislaid as he would turn to alcohol and sex until he could not even tell about the night and the difference between the night and the day. Frederic’s lightweight approach towards war and life in general was easily counteracted with carnal pleasures. It was not only Frederic who found no sense of fulfillment in war, as his attitude towards war was initially shared by almost all characters in the novel, with a slightly more optimistic outlook.

Don't use plagiarized sources. Get your custom essay on
“ “A Farewell to Arms” by by Ernest Hemingway ”
Get custom paper
NEW! smart matching with writer

Nevertheless, as the novel progresses, the men come to realize that the battles are growing in number and atrociousness. Even Frederic when asked why he chose to go to war, replies I don’t know, I was a fool.

The dissapointment with war is growing stronger every day, as men are gradually losing their will to fight or even participate in the war as they acknowledge that there is no finish to a war.

The apathetic manner of the narrative of war is so striking, that even key events in the novel are preceded by detailed description of mundane activities, such as the momentuous event of the explosion of the mortar shell that kills some soldiers, including Frederic’s friend Passini, and seriously injures Frederic is introduced by the casually detailed description of him and his fellow ambullance men eating their cold pasta and drinking wine that makes you forget all the bad. The countless deaths result in a myriad of bodies which de-signify death by becoming just more objects in these rapid narratives.

Instead of dying gloriously on the frontline, Passini is yet another collateral victim among the myriad of casualties who could not stand a chance.

The immeasurable number of deaths does not even compare to the worthless achievement of the Italians who only managed to defend the mountains beyond the river. It is a widely accepted fact that traumatic wounds of any kind bear psychological repercussions, with which the wounded must and will cope with sooner or later. Caruth affirms that trauma is not locatable in the simple violent or original event in an individual’s past, but rather in the way that its very unassimilated nature”the way it was precisely not known in the first in stance” returns to haunt the survivor later on . According to Caruth, the cognizance of trauma is unfeasible, as the human mind is not able to assimilate the respective experience. Hence, the literary study of the traumatic event is based on its striking and unconventional invasion of the narrative. I knew I was hit and leaned over and put my hand on my knee. My knee wasn’t there, said Frederic serenely and collectedly to himself after having realized that he had been seriously injured. Frederic’s peculiar description of his severe injury is a perfect example of the language of trauma, as the wounds of war are reiterated through the clash of narrative and trauma.

The blunt remark of the acquired wound omits any description of facial gestures or sentiment, thus linguistically it is considered to be an emotional response to an overwhelming event that disrupts previous ideas of an individual’s sense of self .Frederic’s traumatic wounds are displayed through the bodies which bleed in this novel, at times uncontrollably, and Frederic’s narrative likewise suffers at times from troubling and uncontrollable outflow. Frederic’s dealing with trauma proves so aberrant, that he himself is unable to describe it rationally: I tried to breathe but my breath would not come and I felt myself rush bodily out of myself and out and out and out and all the time bodily in the wind. I went out swiftly, all of myself, and I knew I was dead and that it had all been a mistake to think you just died. Then I floated, and instead of going on I felt myself slide back. I breathed and I was back. From this point on in the novel, Frederic is compelled to leave the physical realm, the body, and to narrate the event of his injury from the psychological realm, that is through the mind. The shock of the wounding shatters all rational boundaries and brings forth its disintegrative narration of reexperiencing.

According to Dodman, although Frederic reveals a desire for a whole and perfect retelling of his experience, his narration functions as a prosthesis meant to stave off a sense of the self as a disarticulated scar as his reality will forever be affected and intertwined with the traumatic wound which is to be coped with through its constant recollection. The inner perception of the self is altered to such an extent that it is compelled to transform completely in order to be able to come to terms with its new identity generated by the impact of the traumatic experience. The transformation of the self is thus perceived as a rupture between the old self and the traumatized self. Frederic experiences an absolute dissent of consciousness the moment he gets wounded. As a result, his narrative is also affected by this breach of consciousness that pervades the novel in totality. A new and modern perspective on war is being drafted in A Farewell to Arms by Hemingway, as war kills the very good and the very gentle and the very brave impartially. Through Frederic’s narrative, Hemingway creates a dichotomy of reality and illusion which proves difficult to delineate or recognize.

The line between the illusion of normality and the actual reality of unruliness is a blurred one, as Frederic’s stance towards war is rather indifferent and dispassionate. He considers the world all unreal in the dark, but is aware of the fact that that was all there was . Nevertheless, the protagonist does encounter a source of value in life in his love for Catherine, to whom he becomes attached to the point that he cannot make up a separate self anymore. The feeling of love anchors Frederic into reality, which, ironically, ultimately provides the spring for the leap towards reality, thus intensifying the traumatic blow of war. As the plot unfolds, Frederic’s oblivion towards war is being shattered piece by piece, body by body. Not only does Frederic lose his identity and humanity as a representative of war, but he rather chooses the path of love at the expense of that of war, thus undermining the priority of war. A culminating point of the novel occurs when Frederic takes off his uniform once and for all and bids a farewell to arms when he is nearly shot to death by embittered soldiers.

In order to avoid being executed, Frederic plunges into the river and manages to escape. The dive into the river symbolizes the break with war as he is cleansed from any further burden of war and makes peace with it on a spiritual level. Even though Frederic chooses love over war, he is not able to isolate himself from the sense of obligation towards war. The traumatic memories of war are tormenting him from the inside to such an extent that he ends up fighting an internal war by trying to justify his sense of guilt. Even when he gets the chance to live peacefully with Catherine in Switzerland, the constant reminiscence of warfare emerges as an impediment to the mental retreat from war.

The trauma of war serves to prove that the reconciliation with the self or the outer world is unattainable as life, both personal and social, is a struggle in which the loser takes nothing. Frederic’s evolution from illusion to reality, from oblivion to knowledge is skillfully presented. Hemingway delineates the protagonist’s initial ignorance, subsequent acknowledgment and first-hand experience of what war has to offer in a progressive manner through Frederic’s self-effacing narrative, which allows for the reader to formulate his or her own personal judgment of war.

"A Farewell to Arms" by by Ernest Hemingway. (2019, Aug 20). Retrieved from http://studymoose.com/a-farewell-to-arms-by-by-ernest-hemingway-essay 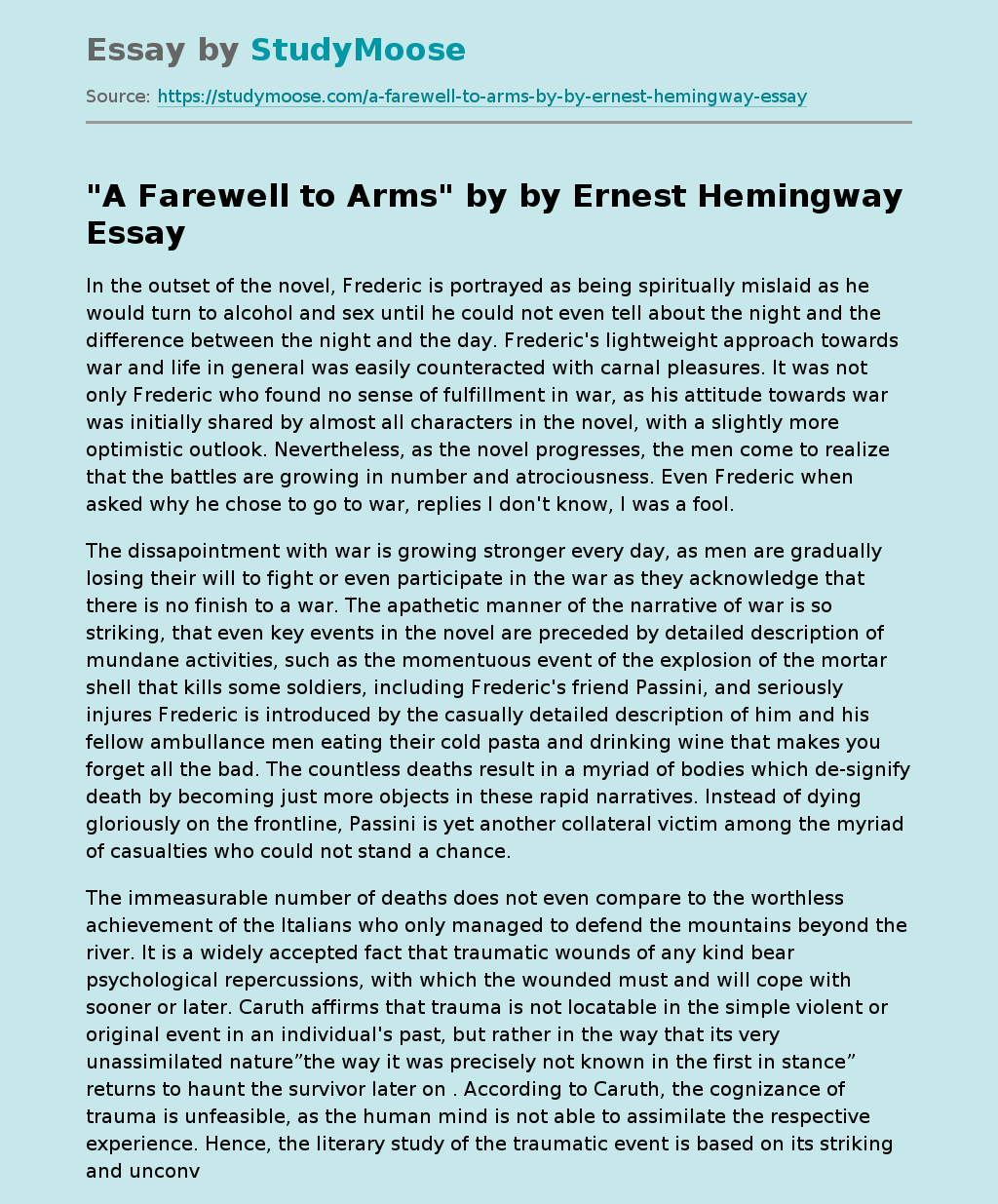