The novel Parvana is set in Afghanistan and shows the difficult life of a family, who live in a war torn country. The family in focus consists of Parvana, Mrs Weera and Nooria. The members became distraught as their father was taken from their house by the Taliban, a violent religious military group. This meant that they had to change their ways to survive without him. First the Taliban had taken over their city, Kabul, then they took one of their parents and slowly the family was losing Mother as well.

Don't use plagiarized sources.
Get Your Custom Essay on A children’s novel Parvana Just from $13,9/Page

After Father was taken Mother became distressed and could no longer cope without him. Parvana and the women in her family had to become risk takers to live. Echoing in her ears were the words her father said to her as he was pulled away from the house, “Take care of the others, my little Malali.”

The spirited child was determined to complete her father’s task. With Mother depressed Parvana had to become one of the household leaders.

With her natural strength of courage, she had to persist to find a way of survival for her family. She had to complete life risking challenges and faced the women hating Taliban day in and day out. Out of bravery and necessity Parvana cut off her damaged hair, and dressed as a boy. She did this with the support of the female adult figures in her life. “As more and more hair fell away, Parvana began to feel like a different person.” And a different person she was. Parvana, now disguised as a boy, went off to work at the market place, writing and reading letters.

She was brave and went to earn money for her family to live on every day. With her families survival in her mind everyday she had to work as hard as she could. On a daily basis she watched the tea boys run around to the other stalls, little to the other tea boys’ knowledge, one of their own workers was Parvanas old classmate Shauzia. Parvana and Shauzia soon started working together as boys, digging up bones to earn money. With Mrs Weera advising her on what they need to buy, Parvana had gained so many life skills, and now she seemed to be a leader, like one of her adult figures, the genuine role model, Mrs Weera.

Mrs Weera was family, not buy blood but by love. She was always there to help and guide the family. When Mother took sick, Mrs Weera became the organiser of the house, by cleaning the rooms and directing the way of function throughout. She quickly taught the girls that they had to do what they could to support their family. The positive lady was the one who came up with the idea of Parvana cutting her hair. When she could see that Parvana was upset about cutting her hair she reassured her that it was okay and made her see how important it was that she followed through with it. Mrs Weera was strong and formidable; she had been in the Women’s Union with Parvanas mother, she made sure there was no nonsense and that everyone worked together as a team. “What in the worlds going on here?” she asked. In a few quick strides she was in the bathroom, searching out the source of the stench. “Why aren’t those diapers washed?” “We’re out of water,” Nooria explained.

“We’ve been afraid to go out.”
“You’re not afraid, are you, Parvana?” She didn’t wait for her answer. “Fetch the bucket, girl. Do your part for the team. Here we go!” Mrs Weera became supporter of all the family, and treated them all like they were blood family. Mrs Weera could tell that the eldest child, Nooria, was a born leader.

Nooria was a bright young lady, a miniature version of her mother. Her sister instincts were strong with her youngest sister, Maryam and her baby brother, Ali, and spent most of her time looking after them. She was a nemesis to Parvana, but that was for Parvanas own good. She always made Parvana see the good in being a young undeveloped girl, as Nooria lost some of her child hood because of The Taliban. Because of the group, Nooria could no longer peruse her dreams of being fully educated, and becoming a teacher. Nooria wanted a future, of love and intelligence, but she wasn’t going to get that in Kabul. “You’ll never guess,” her mother said, to Parvana. “Nooria’s getting married.”

Nooria could tell that Parvana was worried for her, but with getting married came same good changes to her life. In Mazar-e-Sharif, where she would be living, there was no Taliban. That meant that she had a chance of fulfilling her dreams, No Taliban means that girls could still go to school, still be educated. Nooria was going to be sent to the university in Mazar. The family, except for Mrs Weera and Parvana packed up and went to Mazar-e-Sharif for Noorias’ wedding. Nooria was an inspiration to the younger children, finding a way to live her dreams.

Even though The Taliban tried to undermine the women of Afghan society, the ladies of this family showed how strong and determined alot of the women are to try and get what they deserve, their place back in Afghanistan.

A children’s novel Parvana. (2016, May 28). Retrieved from https://studymoose.com/a-childrens-novel-parvana-essay 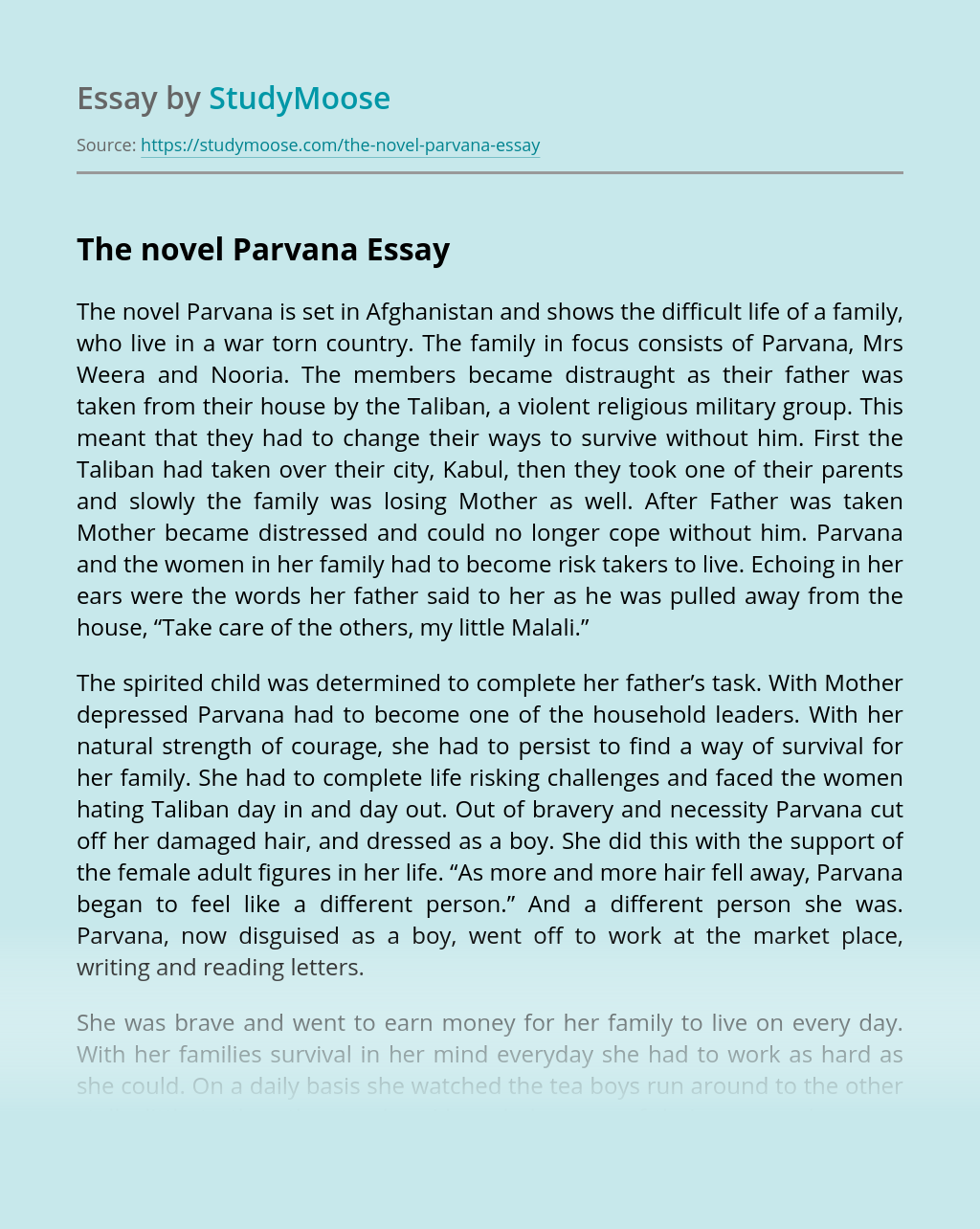 The secret of the team’s success is their faith to God. Their coach and the team itself seems to be hopeless and almost to give up, but their coach make a stand and seek God, His revelations and His sovereignty in their situation. Our events team almost has the same situation. We seem to be...

Balancing Penn foster studies with work and family Being a full time working father of one, I have the responsibility of taking caring of my mother, wife and son. However this doesn’t hinder me to continue my studies, though it has some difficulties on adjusting the life in between my studies and family life. The...

Live is a continuous process of making decisions and setting up goals for the future. Some people will prefer living it alone, and enjoying the single life, but others may prefer living it with a partner, and enjoy married life. Everyone in this world faces a problem at some point in life, either single or...