They valued the individual’s rights over society’s needs and they often celebrated the heroic rebel and the iconoclast. The fact they’re listening to a story as well makes us a part of it. Lockwood was not there from the beginning, not really a part of the story.

Bronte presents Lockwood as Heathcliff’s ‘new tenant’ the fact that he occupies thrushcross grange tells us that he is wealthy and obviously from money and class.

Don't use plagiarized sources. Get your custom essay on
“ Gaunt Thorns ”
Get custom paper
NEW! smart matching with writer

He seems to have the morals of a gentleman along with the social abilities and niceties that come with it. He is intriguing we don’t know where he is from and he is mysterious. He seems well informed of the running of a large house. Not an animal man keeps himself to himself as he sees himself as sociable compared to Heathcliff.

Our first impressions of him are that he isolates himself in Wuthering Heights.

Proficient in: Books And Reading

He appears to be very unsociable and inhospitable. He seems very dark, mysterious and withdrawn. He is presented as reserved which implies secrets and stories, and that ‘his black eyes withdrew so suspiciously under their brows’, he seems to almost give the impression that he is watching and observing everything that happens.

He appears to resent his situation and even more so the fact that thrushcross grange is now occupied by a new tenant. This gives the impression that he has memories there and his protective and possessive streak appears when Lockwood mentions the property.

He is described as a ‘dark skinned gypsy in aspect’ which clearly implies foreign roots, thus cementing his mysterious and ominous presence.

In chapter 3 we witness Lockwood experiencing the fright of his life – he lodges in Heathcliffs forbidden spare chamber.

The principle of mystery

The principle of mystery is exposed in the strange way that Zillah shows him to the forbidden chamber, whilst informing him of the fact that he should ‘not make noise, for her master had an odd notion about the chamber…and never let anybody lodge their willingly’ furthermore when panels, which are common for gothic literature and discovers Cathy’s repeated name scratched into the paint of the wood encasing the bed/structure, the element of mystery is cemented.

Thus coercing us to wonder as to what horrific events took place regarding this mysterious chamber, and its previous inhabitants, that would lead to its isolation.

The typical gothic novel contains a strong element of supernatural which is firstly and evidently most vividly shown in Lockwood’s haunted dream in which Cathy’s name appears before him in a “glare of white letters…as vivid as spectres”.

Shortly after this experience, Lockwood falls asleep a second time only to be presented with the ghostly, bloody apparition of little Cathy Linton at his window, “the intense horror of nightmare came over me; I tried to draw back my arm, but, the hand clung to it, and a most melancholy voice sobbed “let me in let me in”” The graphic nature of the account evokes a sense of unearthly dread and consequently illustrates that the ghostly and supernatural experiences received by Lockwood prove to be evidence that Wuthering Heights is ridden with other-worldly ideas.

The scene of gothic  novels

Gothic novels typically take the setting of a dark castle, dungeon and so the weather wracked state of WH offers a feral, dangerous and menacing atmosphere. “I paused to admire a quantity of grotesque carving lavished over the front and especially about the principal door, above which, among a wilderness of crumbling griffins, and shameless little boys. I detected the date 1500”.

This imagery gives WH the atmosphere of a haunted mansion or castle, typical of gothic literature. The sense of WH being sinister situate is seen greatest upon its comparison with Thrushcross Grange, evoking the sense of morbidity about the residence. Thus, this provides evidence of the fact that WH is extremely typical of a gothic novel.

Pathetic fallacy – commonly used to create tension and suspense and the wild weather which surrounds WH is as equally important as the mansion itself. “Pure, bracing ventilation they must have up there, at all times, indeed; one may guess the power of the north wind by a range of gaunt thorns all stretching their limbs one way, as if craving aims of the sun”. Weather mirror the passion and wilderness of the residents, past and present.

Heathcliff is the personification of the estate in the sense that he is wild and strong and he is in many ways a archetypal gothic character in that he is mysterious, brooding, dark and dangerous. Like gothic villains or in many cases the antagonists – Heathcliff is bent on vengeance and doesn’t care who must suffer from his cruelty in order for him to achieve it. He is a man made of experiences and in this way Heathcliff is a prime example of a Gothic protagonist.

Bronte makes perfect use of gothic elements in evoking within the readers mind a powerful sense of dread – a chilling of the spine and a curdling of the blood. All the barbarity of gothic novels come from association with the medieval and middle ages, in a sense of their wild, bloody and barbarous views on justice and revenge. As far as all the main key points that a gothic novel is required to include goes, WH follows the guiding principle almost to the letter. Therefore, the opening chapters – typical of a gothic novel. 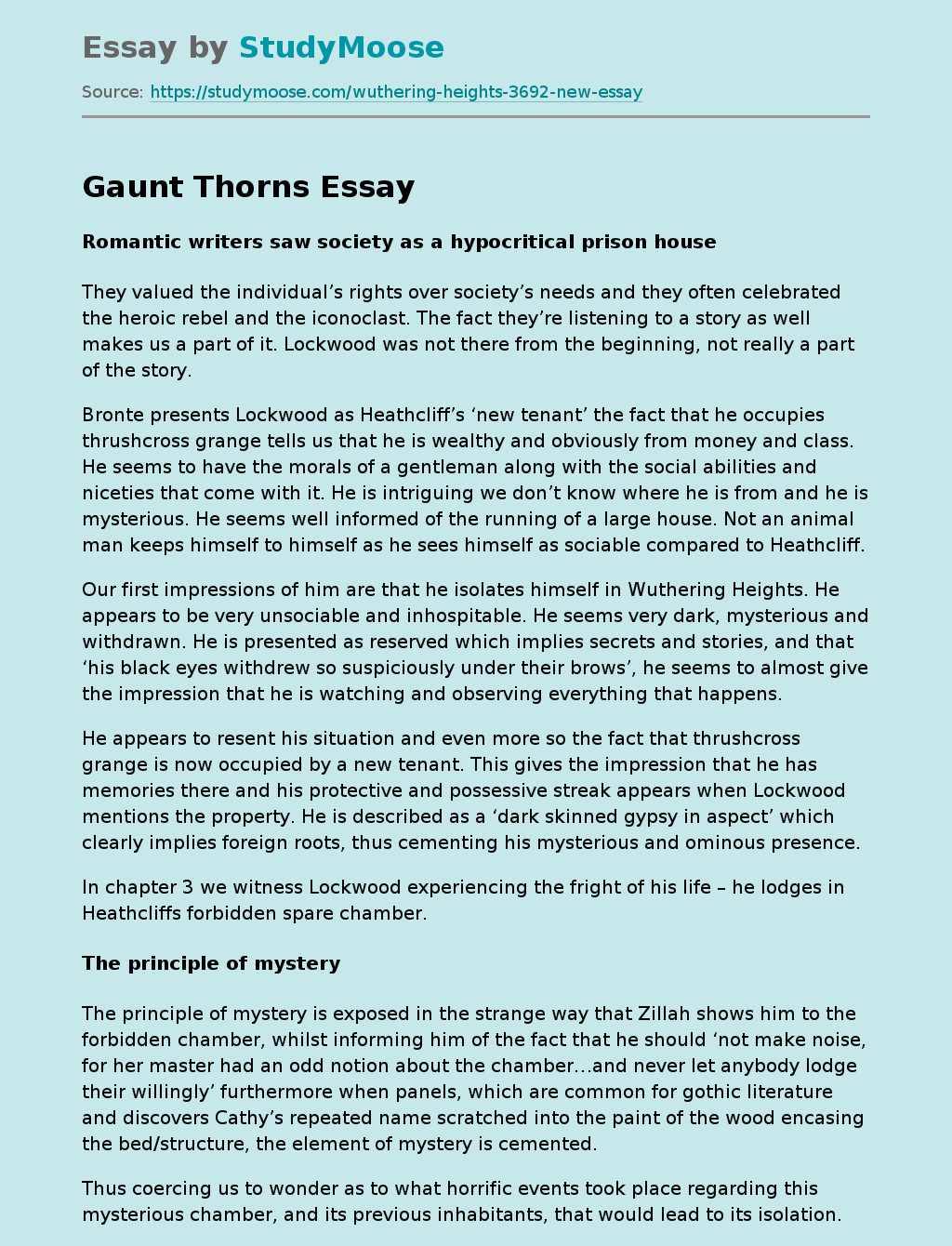