Why was sherlock holmes so popular?

To many, Sherlock’s appeal is in his eccentric personality, but his methods draw in alot of admiration from a vast number of readers. Sherlock’s methods separate him from many other detectives, as they are very unique to him and are relevant to his character. “No, but I fancy I have deduced a little more” He is very observant, which many of the other methods rely upon, from his observations he has an almost supernatural ability to deduce hidden clues.

“He is a genius, a philosopher, an abstract thinker.

He has a brain of the first order” Although there is a certain arrogance to Holmes he still has every respect for his opponent, he will never underestimate them and always tries to become familiar with the villain and his mannerisms, before apprehending him. “There is no one who knows the higher criminal world of London better than I do” Holmes had an amazing knowledge of almost every high profile criminal in London, a skill which he exploited to his advantage.

“My profession is its own reward” being a detective was not only Holmes’ job it was also his livelihood, his obvious enthusiasm is crucial in his success.

He will never take interest into a boring, straightforward case instead he always pursues the more challenging and irregular cases, which also makes the stories so popular. “The left arm of your jacket is splattered in no less than seven places” Holmes observational skills were very important in his success, as all of his clues had to be factual, Holmes worked very much upon data and evidence which usually he had observed “ah, I have no data”.

Holmes was a very open minded detective he did not set upon one idea until there was enough evidence to back it up.

In the short stories of Holmes many of the plots were based on how the criminal committed the crime, or even why he did so, because of this ‘howdunnit’ approach his open mind was essential “I have devised several different explanations”. All of these unique methods added extremely to Holmes appeal and helped him to establish a name for himself in both, the fictional and non-fictional worlds. Dr Watson narrates the stories of Holmes; he is a critical character, which is of indescribable importance.

The reason he narrates the stories is reasonably straightforward; he is the bridge in between the readers, and Holmes mind. Dr Watson is a vital character, he is the one who still keeps the mystery in Holmes’ quests, if it were Holmes narrating it would bring away all mystery; as we would read into his mind. “I cannot yet see any connection” being a doctor he is a very intelligent man, but Holmes continually outsmarts him, he is made to look very unintelligent. This adds to the greatness of Holmes having someone around to show his superiority.

Watson is very loyal and does not hesitate to do as Holmes requests. He has a practice, which he finds very tedious, instead of spending his time there he will go with Holmes on his quests. He has a clear thirst for knowledge, which is shown through his constant questioning. This is great for the reader, because they can see into his every bit of method and reasoning. The stories have got to be one of the biggest appeals, they are very abstract and unusual, and this was because Holmes refused to follow up boring and regular stories.

What sparked Holmes mind were the peculiar cases, with twists and anomalies. The variety of the mysteries was outstanding, for Arthur Conan Doyle to achieve such a wide range of original ideas is an extraordinary feat. Conan Doyle was very interested in forensics, which helped enormously. Every mystery was solvable, Doyle made sure of that he left subtle clues, which no doubt Holmes had picked up along the way. If you study each structure of every story they are all very similar, there is always an unusual crime featuring at the beginning of the mystery.

You will always have a high profile villain. Then you will find an unusual or unexplained happening or event. There will always be a motive, usually money. There are always a mixture of clear cut and subtle clues along with the odd red herring, which will throw the reader and make the final explanation more climactic. The Explanation will always be delivered at the end and be either arrogantly retold to the villain or told to Watson. Every one of Holmes explanations was an amazing and defining part of the Sherlock Holmes stories. There was always a high profile villain in each story.

Each one of the villains was very stereotypical, physically strong intelligent and unforgiving. There were many villains that matched Holmes in his capabilities and there were some very defining moments because of this. A final showdown in the final problem between Holmes and his bitter rival Professor Moriarty proved to be very climactic. “It is inevitable destruction. You stand in the way of not merely an individual, but of a mighty organization, the full extent of which you, with all your cleverness, have been unable to realise. You must stand clear, Mr.

Holmes, or be trodden underfoot. ” This was a threat made by Moriarty, which defines the characteristic of him as a villain. He makes a very direct threat to Holmes life; Sherlock still stands tall and does not fear it. ” I know you, you scoundrel. I have heard of you before. You are Holmes, the meddler. ” This is another confrontation between Holmes and his opposition. These confrontational scenes are very gripping for readers. In conclusion, there is clearly a very wide range of factors that have all had an effect on the popularity of the stories.

It is the combination of all these concerning factors that make the legendary Sherlock Holmes all he is today and this is precisely why he was so popular back in Victorian times. From the time of the publishing, to the stories themselves every factor was perfect for the creation of a very popular character. 3 Show preview only The above preview is unformatted text This student written piece of work is one of many that can be found in our GCSE Arthur Conan Doyle section.

Why was sherlock holmes so popular?. (2017, Oct 21). Retrieved from http://studymoose.com/why-was-sherlock-holmes-so-popular-essay 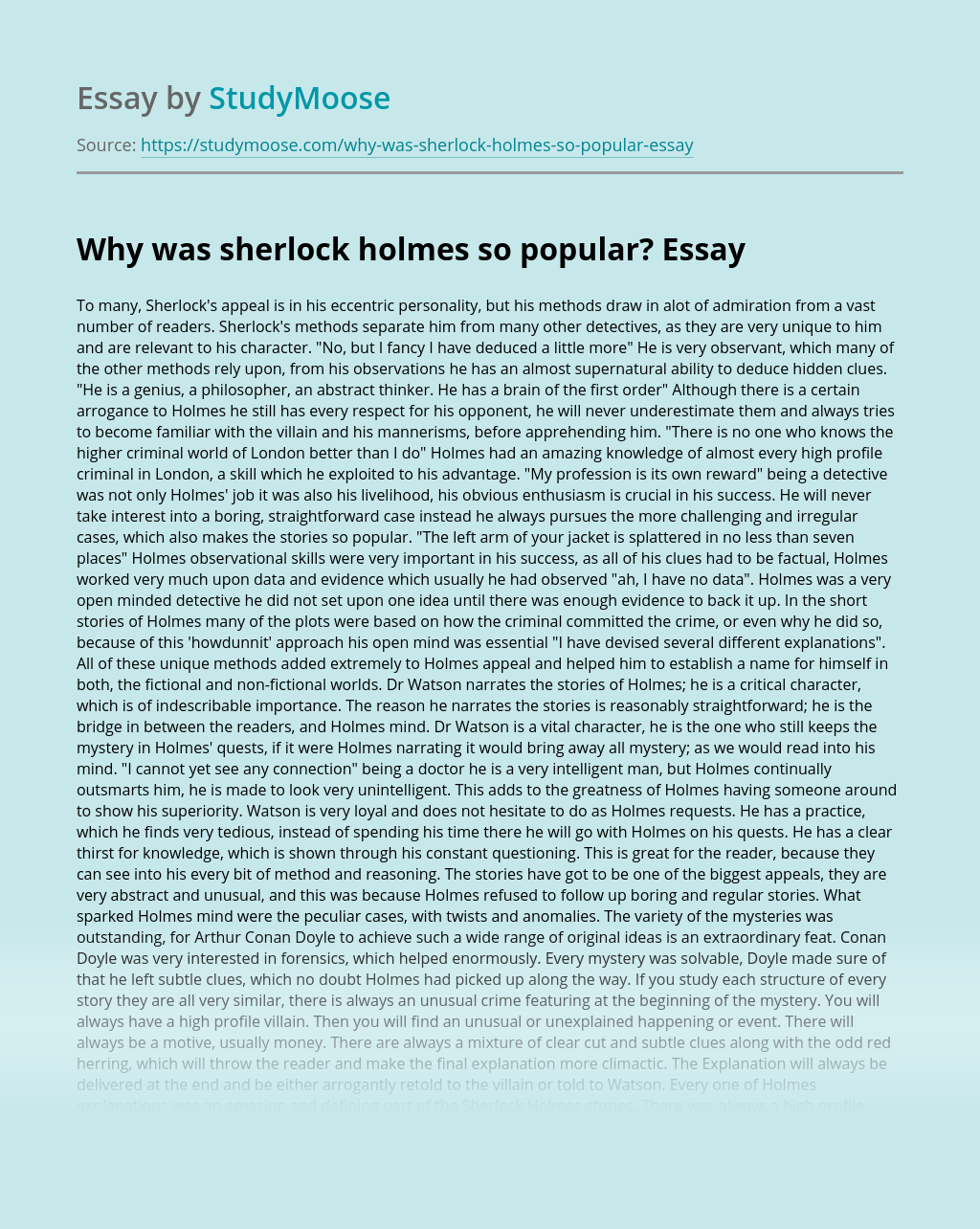 Don’t waste time
Get a verified writer to help you with Why was sherlock holmes so popular?
Hire verified writer
$35.80 for a 2-page paper
Stay Safe, Stay Original