What is The Jonestown Genocide?

The Jonestown genocide also known as the Jim Jones genocide or Guyana genocide was a mass murder that took place in Guyana, South America and was known as the largest mass murder before 9/11. Some people call the genocide a mass suicide but there are many signs that show that they were mass murders with a mix of a kind of suicide. In the following paragraphs I will be discussing life in the peoples temple, what life was like when people first came to the “Utopia”, how the so called “mass suicide” had signs that showed it was going to happen.

Don't use plagiarized sources. Get your custom essay on
“ What is The Jonestown Genocide? ”
Get custom paper
NEW! smart matching with writer

In the 1950’s a man named Jim Jones established a church called the Peoples Temple in Indianapolis, Indiana. Since the church was established during the civil rights movement Jones made sure that his teachings were knees that showed that all races were accepted and that they could come and worship the Lord in unity. The church was growing and kept getting larger to the point where he moved his entire to church to a new area located in San Francisco, California in 1971.

Life was going good for everyone especially Jones until his church was accused of financial fraud and abusing some of the members in the church. After these accusations were made against Jones and the people temples Jones told his followers that they would create a Utopia where they could all live together and spend time with each other. These people thought that Jones was so amazing so they followed him to a placed in South America called Guyana and built an entire civilization called Jonestown.

When people first arrived at the new Utopia life was good. It was a place where all races could come together and there was no separation. Children would play with children of multiple races, you would share houses with other families of a different color, and there was always different church services that everyone would come together as one. Jim Jones still had his church in the United States and would travel back and forth between the two areas, but when Jones was in the Utopia he was called father and sat on a throne above all other people. Everything changed in the Utopia when Jim Jones completely devoted himself to be there 24/7. The only reason he moved there was because investigators had been questioning and investigating Jones’ church and he was scared that he was going to get caught for doing something that he wasn\’t supposed to do.

WIthin a couple of months of Jones arrival many people saw the real side of Jones come out, he would hold meetings late at night that would last hours and then would force people to wake up at six to do work and repeat the same thing. Jones also established things called White Nights that were made to prepare the members of the community for a Revolutionary suicide. These White Nights were a major sign that something terrible was going to happen. At these white nights members were told to drink “ Kool-Aid” that had cyanide poisoning place in it so that people could escape their troubles (since they would die from putting the cyanide poisoning in their bodies). Another sign was that U.S Congressman Leo Ryan heard of the place and decided to go and investigate some of the things that were going on in the Utopia. With him an NBC camera crew came along to record what the Utopia was and to get feedback on it. Everything was going fine until the day that the Congressman and the camera crew were leaving. One of the camera crew members came up to Jones and handed him a note that he had gotten the night before that said the word help on it. Jones tried to play the note off, but the congressman started getting concerned and allowed anyone who wanted to leave to join him. A few of the younger members either went with Ryan or fled into the woods. As Leo Ryan and the others were boarding the planes a group of men on a tractor came and shot up the group of people killing the congressman, three of the NBC men, and two other people.

The shootings also injured 11 other people who were boarding the plane. When Jones got word that the shooting had just happened (most likely planned the whole shooting) he called out over the speakers for them to meet at the compound so that a “Revolutionary Suicide” could take place. Jones told the to put different poisons in “ Kool-Aid” (actually a fruit flavoring) like cyanide, tranquilizers, and other different substances. Parents would first inject their children with syringes and then do the same for the elderly. Before this took place a lady named Christine Miller stood up to Jones and asked him to spare the kids lives, but Jones wouldn’t listen and told her that the only way for them to experience peace. Once the children and elderly were injected adults were next and they were told to drink the “Kool-Aid.” By the time the poisons had “taken over” the body over 900 people were killed with 300 of them being children. Very few that took the drink actual survived. Jones was the only one who didn’t drink the “Kool-Aid” and was found with a gunshot wound in the head (no one is sure if it was suicide or if someone else shot him), some people even pretended to be dead so that they wouldn’t be shot. Now in Guyana there is a small memorial for those that lost their lives that day in November.

In conclusion the massacre that occurred in Jonestown was a devastating thing. Jim Jones had a certain quote located above his “throne” that said,” Those who do not remember the past are condemned to repeat it.” I think the quote is saying that if we don’t remember the things that happened in history that it is bound to repeat itself. This was my summary on the Jonestown genocide.

What is The Jonestown Genocide?. (2020, Sep 16). Retrieved from https://studymoose.com/what-is-the-jonestown-genocide-essay 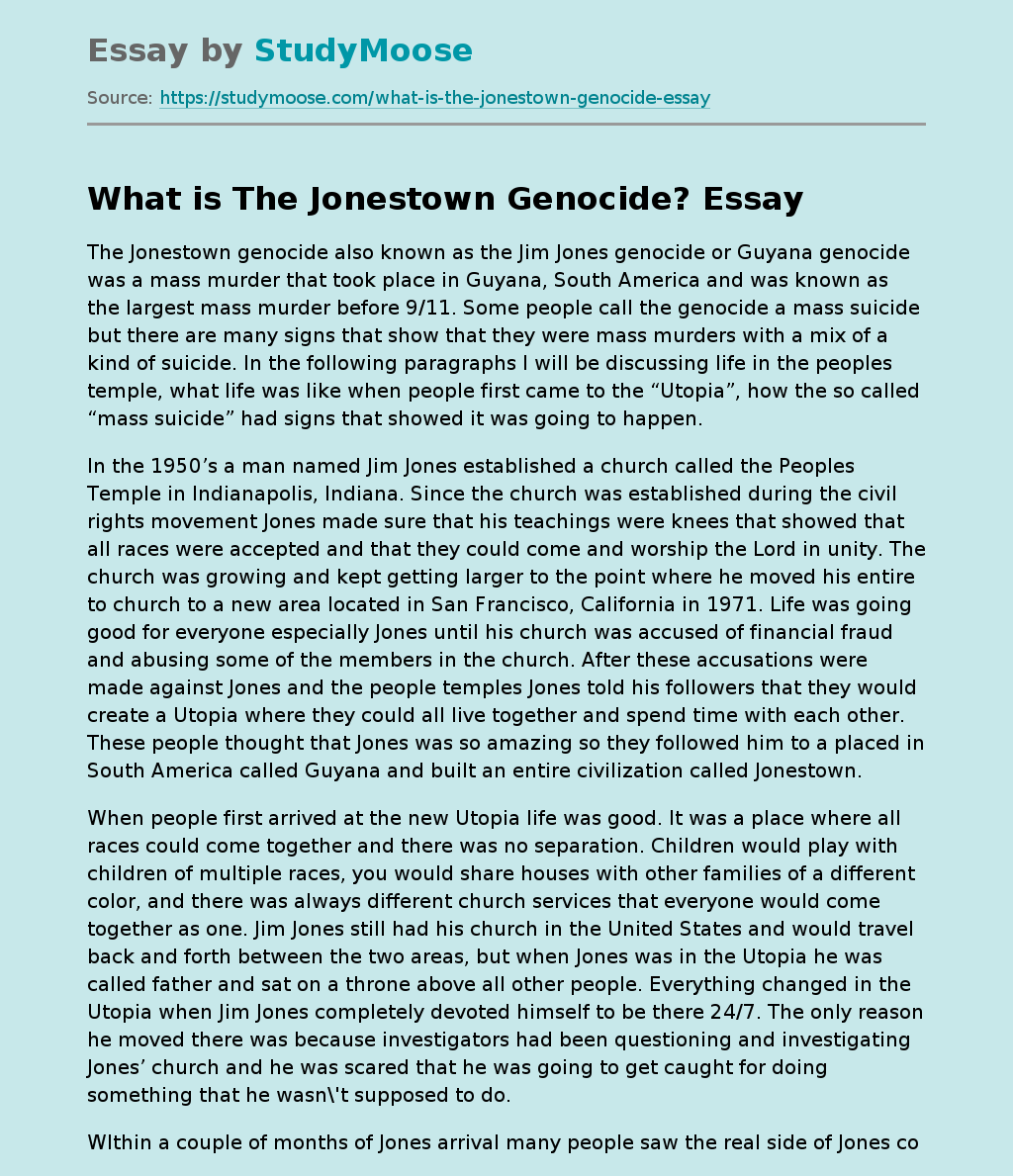