In the case, the obvious issue was Westchester Distributing’s internal controls, but less obvious and just important were the company owner’s span of attention, tone at the top, and the incentives/focus management put on outputs. As a result of the company’s high growth from 20 employees to 60 employees within eight year, internal controls had not been given attention. With this said, simple controls should have been put in place as the company reached growth goals. One control Vince did have in place was having Roberts review and sign all expense reports, but this would not help if Roberts was involved in falsifying.

Don't use plagiarized sources. Get your custom essay on
“ Westchester Distributing ”
Get custom paper
NEW! smart matching with writer

An independent party does not have incentive to hide irregularities, creating a greater threat of exposure to individuals committing fraud.

The increase exposure risk deters many situations. Before the 1980s, Vince a small number of employees and he his span of control encompassed everyone. With small numbers more direct attention could be given everyone. Although with 60 employees, Vince’s span of control was stretched. Vince now had to delegate task and focus on what was important. In this transition from a direct to a less direct management style, Vince lost two way communication with his employees.

Information was going down, but information was not going up. Mr. Mario’s letter indicated that his voice was not being heard. More a face-to-face interaction needs to be taken to have open communication and avoid the “Wizard of Oz” approach. When employees feel heard and empowered, they will alert management more quickly to problem.

Another issue that goes hand in hand with communication is Westchester’s poor tone at the top. Vince had employees sign the “Standards of Conduct” but did not demonstrate a focus on ethics through his actions, as he communicated mainly through memos. Vince expected to hear what he wanted to hear and not what may have been really going on. From the situation in the case were Roberts was crying and Vince wanting to slap Roberts, it was evident that Westchester’s employees also feared telling Vince bad news. An environment of fear and poor tone at the top also inhibits communication when an ethical problem arises. A messenger of bad news may not come forth if fear of retribution is high. Vince focused on the output too much and not enough on the processes or inputs. This signaled to his employees to focus on the outputs.

Employees started to ignore the process as Vince was doing and take whatever acting that was needed to reach output goals. This created fertile environment for fraud. The focus on output gave way to the need to break the rules, and poor tone at the top gave way to employees rationalizing their actions to achieve their goal. The last element of fraud opportunity was also present as Carter, George, and Roberts were a close trio and no internal controls were in place to deter them. The fraud that occurred was a breakdown of core operations and exposes the firm to the possibility of shutting down for 45 days. This operations risk can result in a loss of reputation, franchise risk.

Westchester at the point in time of the case as much to lose in terms of reputation as it has the title of Miller Grand Master seven times. One method that Vince should consider to better signal his focus on ethics and not just sale is implementing a balanced score card. Learning and growth category with a focus in ethics could be one category that helps signal Vince’s commitment to ethical practices. Customer satisfaction and improvements in profitability would also help communicate the whole strategy to employees so sales is not one sides. Salesmen have the direct relationships with customers and have more insight than anyone else in terms of customer needs and expectations. Their insight is valuable asset to Westchester and should be focus on. 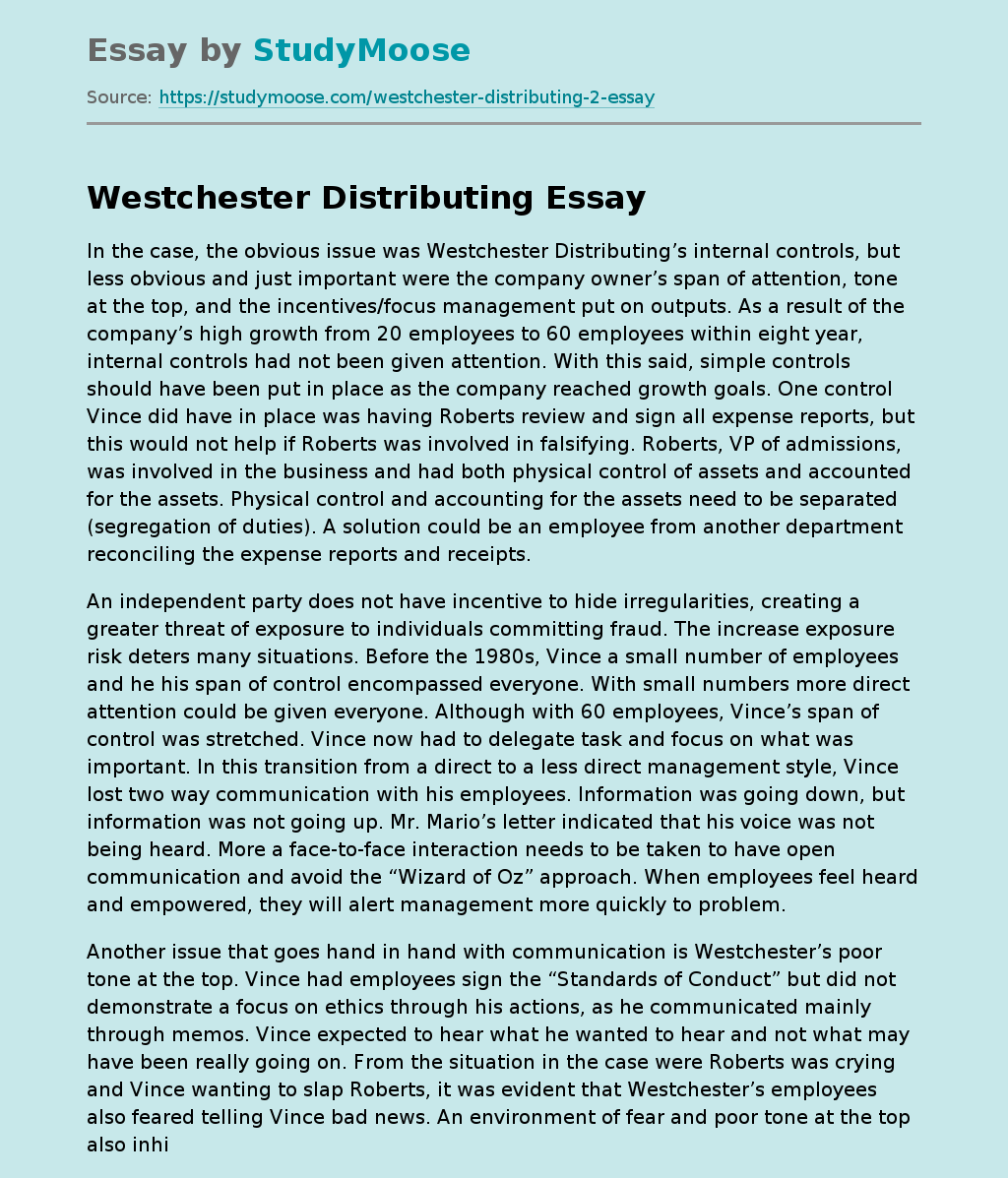