Walking in Someone Else's Skin

“You never really understand a person until you consider things from his point of view… until you climb into his skin and walk around in it” (Lee, 1961, p. 39). Harper E. Lee created this book to illustrate good and evil in the world through mockingbirds. The main character, Scout, learns about the meaning of a mockingbird, good, and bad by taking things in from Boo Radley, a person who helped her to grow up. The time when Scout walked in Boo Radley’s shoes is important because it proves how Scout is growing up throughout the novel.

Don't use plagiarized sources. Get your custom essay on
“ Walking in Someone Else’s Skin ”
Get custom paper
NEW! smart matching with writer

First of all, when Scout walked in Boo Radley’s shoes, it was very crucial to her character because it helped her to develop from innocence to a grown-up moral perspective, which causes change. To begin, Scout states, “It was then that Dill gave us the idea of making Boo Radley come out… but Jem and I have never seen him” (Lee, 1961, p.10). This quotation proves how Scout considered Boo as a weird monster; therefore, showing how she is deathly afraid of him, yet finds a way to use him for her own fun.

The statement illustrates how Scout is no longer scared by ghost tales; she had been preoccupied with other things that she simply forgot to be scared. However, there is still that childlike quality in her that wonders about him.

Then again, the strongest example is this quote: “Atticus was right… just standing there on the Radley porch was enough” (Lee, 1961, p.374). This proves that Scout has changed because it shows the reader how she sees Boo’s loneliness and why he did the things he did. Also illustrates how Scout understands that some things are not quite as they seem and the dangers in making assumptions about people and situations. Consequently, Scout has grown up as a person due to her experiences with Boo Radley.

This all adds up to one conclusion; that the time Scout walked in Boo Radley’s shoes proves to be important because of how it helped her to grow up. Even though it took awhile for Scout to develop from Boo Radley, she did so through first fearing him, to not caring about him, and then understanding him. Boo Radley was necessary in order to help create Scout’s character throughout this novel. Who knew that walking around in someone else’s skin could give such a journey with a life changing outcome.

Walking in Someone Else's Skin. (2017, Jan 07). Retrieved from https://studymoose.com/walking-in-someone-elses-skin-essay 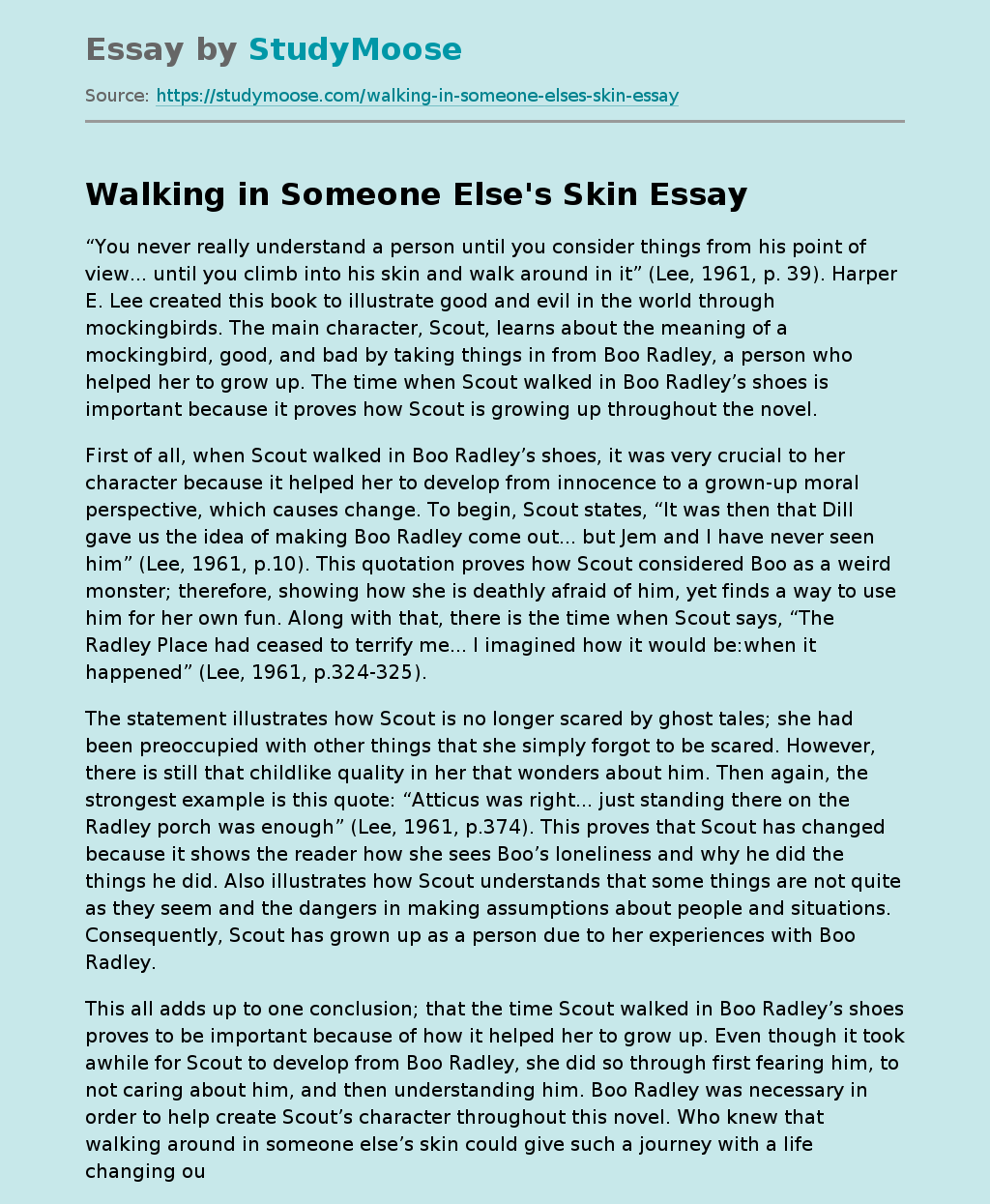