A crime is a serious offense against the public law (Webster Dictionary), but not all serious crimes have a clear victim. Victimless crimes, legal offenses to which all parties consent and no parties are injured, however, account for 86% of the Federal Prison population (Libertarian News). For the reason that the illegal activity is consensually entered into, victimless crimes are often called consensual crimes. Parties consensually entering a crime, or agreeing to enter, may not be considered victims in the eyes of the law nor other parties, but may contribute to other problems and vices.

Don't use plagiarized sources. Get your custom essay on
“ Victimless Crimes ”
Get custom paper
NEW! smart matching with writer

Even though victimless crimes may violate some constitutional rights, prohibiting them will limit the economic costs, the health issues brought upon the people, and all the criminalization occurring around the world. Such cases, where society pays as a whole, deserve punishment.

According to (www.halexandria.org), lots of money is spent for the protection of others in such crimes. In order to keep society safe, punishing people for these crimes cost over fifty billion dollars. Prohibiting the consensual crimes however, will limit and prevent the even greater economic costs to occur. Victimless crimes can in fact take even more billions of dollars out of people’s pockets. Worldwide pornography, with 97.06 billion dollars in revenue for 2006 (Enough is Enough), is said to be a business that takes advantage of the people.

The fact that the goods and services Mejia 2 are greatly desired ensures a strong demand that maintains high prices. Accounting the cost of the pornography business and the other victimless crimes can certainly outweigh the fifty billion dollars that cost to imprison the perpetrators.

More over just the economic costs, the health concerns in society, due to victimless crimes, can actually have real “victims.” Participants in such crimes do not only hurt themselves. The offender’s families may be hurt, and victimless crimes could even lead to other problems where there are unwilling victims. Dealing with pornography, it could possibly lead to the spread of aids and other sexual transmitted diseases. With some of the nation’s largest pornography producers, any disease has the potential to spread quickly, according to (Aids Healthcare Foundation). This could all result in more expensive medical bills which could increase insurance costs (Veneziano). Victimless crimes may start as something small, but could potentially get worst. Therefore, prohibiting such crimes is a necessary step to a safer and healthier society.

Undercriminalization, the failure to prohibit some behavior that arguably should be prohibited (Introduction to Criminal Justice), arises a lot in victimless crime cases, eventually leading to even more crimes. Victimless crimes provide revenue for greater organized crimes. Victimless crimes also provide goods and services for which there is high demand, thus contributing to the serious violent crime rates. Because of the strong demand, large numbers of citizens are driven into association with the criminal elements who supply these goods and services. There is a danger that such citizens will come to view themselves as criminals, cooperating less with law enforcement generally, and are more likely to be drawn into other forms of crime (www.reference.com).

Also, some people may not be satisfied and will go out and look for other ways to make more profit. In such crimes, like pornography, instead of just making adult pornography, people might go out and try to make child pornography which is illegal. Studies show that child pornography is one of the fastest growing businesses online, and the content is Mejia 3 becoming much worse and much more dangerous. Prohibiting these victimless crimes will definitely improve our society and limit criminalization around the world.

On the other hand, victimless crimes are argued and debated to not be prohibited by law because they are violating the constitutional rights of the citizens. These violations include the constitutional right that all citizens have which is to be able to do as they please as long as not interfering with others¸ and the fact that victimless crimes lead to overcriminalization, the prohibition of criminal law of some behaviors that arguable should not be prohibited (Introduction to Criminal Justice). A small number of studies show that the public find these acts less serious than other types of crimes, but what the public does not realize is that society is still affected even though it may not occur directly (reference.com). Yes, citizens do have such rights, but as those studies show these consensual acts can result in negative consequences that might not be immediately apparent.

Prohibiting the victimless crimes will limit the economic costs, the health issues, and all the criminalization around the world. Not having a direct victim does not conclude that there is no victim at all. Instead of just letting it be and causing such harms to society, people consenting to such crimes, should deserve punishment. Ultimately, victimless crime acts should be prohibited by criminal law because they truly have ‘victims.’ 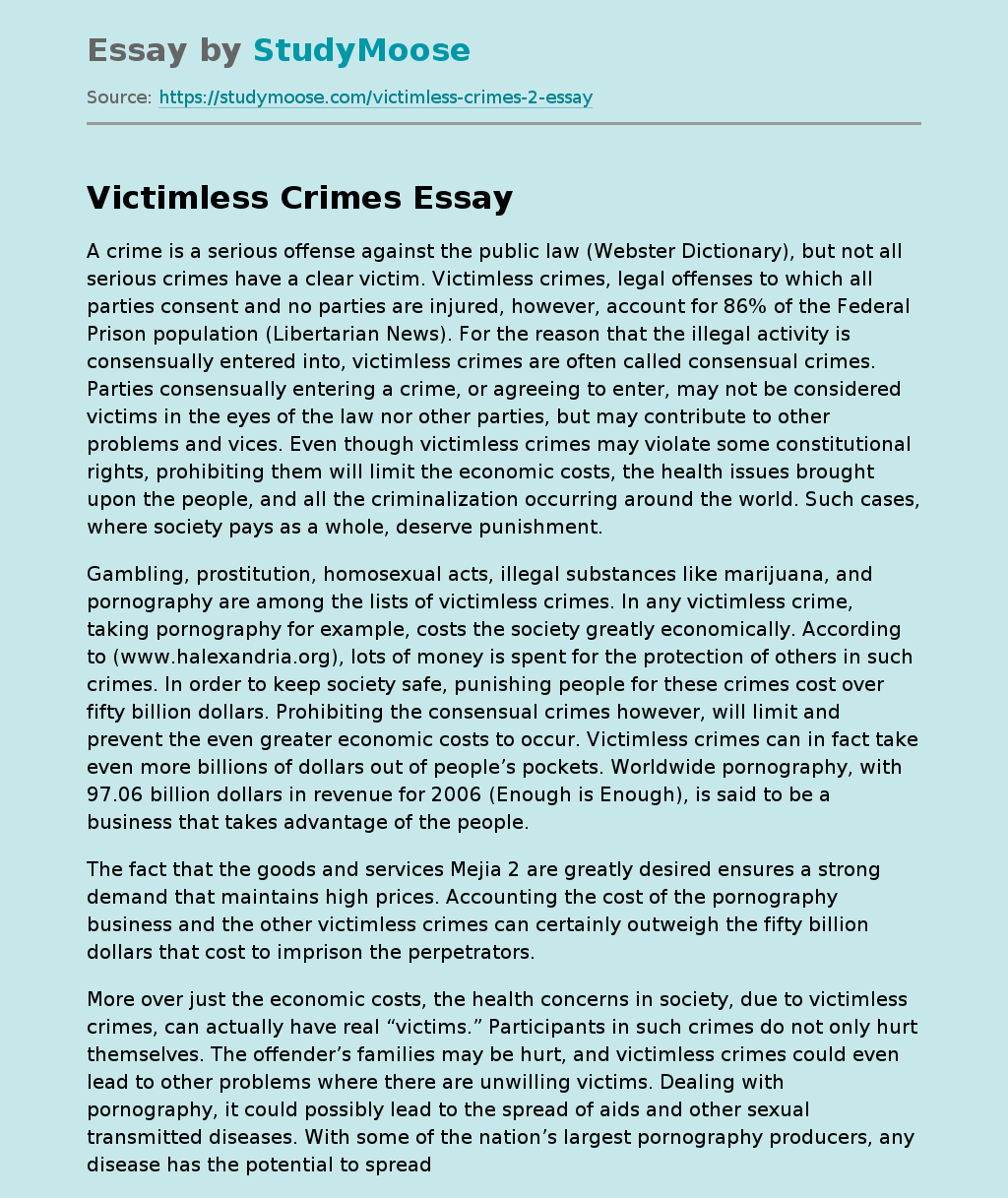