In the current study, natural hydroxyapatite was used as precursor for production of low cost activated carbon using phosphoric acid, nitric acid and hydrogen peroxide, as chemical activating agents. Collected, washed, dried and crushed samples, prepared from camel bone, was impregnated with known concentration of H3PO4 (50 vol%) for 48 h and carbonized at 773 K for 2 h. Adsorption of vanadium(V) from the aqueous solution onto modified activated carbon developed from camel bone (CBNH) was investigated to assess the possible use of this adsorbent.

Don't use plagiarized sources. Get your custom essay on
“ Vanadium(V) removal and recovery by adsorption onto modified activated carbon derived from natural hydroxyapatite ”
Get custom paper
NEW! smart matching with writer

The efficiency of the adsorbent was investigated using batch sorption technique under different experimental conditions. The data obtained from the equilibrium isotherms were found to fit with Langmuir and Freundlich models within the temperature range 25″70oC, while the kinetic studies revealed that the adsorption process follows the pseudo”first”order reaction. The enthalpy and entropy changes associated with the adsorption process, “H and “S were calculated and found to be “16.5 kJ mol”1 and “82.0 J mol”1 K”1, respectively. 0.5 M HCl solution was successfully used as eluting agent for vanadium desorption.

The CBNH adsorbent exhibited a reasonable capacity for vanadium adsorption compared to the other works published in the literature.Keywords: Low”cost adsorbent; Activated carbon; Camel bone; Vanadium. 1 INTRODUCTIONVanadium is a widely dispersed element that is found in about 65 minerals and generally occurs in low concentrations. Making up about 0.014% of the Earth’s crust, it is the fifth”most abundant transition metal [1]. The most common oxidation states of the metal are +2, +3, +4, and +5, although oxidation states of +1, 0, and “1 are also known.

The oxidation states +3 through +5 can be maintained in aqueous solution, and these three oxidation states all have known biological significance [2].Vanadium in the metallic state is used, along with other metals, as an additive to iron to form various stainless steels and is a component of some superconducting alloys. Also, it catalyzes the disproportionation of carbon monoxide to carbon and carbon dioxide. The vanadium oxide, V2O5, is a powerful catalyst that is used extensively in industrial processes and finding recent application in nanomaterials [1]. Novel adsorption and ion exchange techniques have become the focus in the field of harmless and resourceful treatment for heavy metals due to their large capacity, high selectivity, recycle ability, high efficiency, low cost, and environmental”friendliness [3]. Treatment processes for metals contaminated waste streams include chemical precipitation, membrane filtration, ion exchange, carbon adsorption, and co”precipitation/adsorption [4].Adsorption is currently the most prospective technology being used for the removal of organic and inorganic pollutants from several solutions such as waters and wastewaters [5]. Although there are many adsorbents in use, activated carbon is the most widely used adsorbent for the removal of a variety of contaminants. It has been a preferred adsorbent in major industrial applications for many years, due to its high adsorption capacity, high adsorption rate, and good resistance to abrasion [6]. However, there is a major disadvantage associated with it, which is the strict necessity to regenerate the activated carbon to allow for further use, thus, imparting additional costs to the adsorption process. Another negative aspect is the loss of adsorption capacity during the regeneration process which restricts its application even further [5]. Although synthetic resins present a longer working life than activated carbons as adsorbents, their use is still costly for they also require regeneration after use. These aspects have greatly stimulated research interests into the production of alternative low”cost adsorbents to replace the costly activated carbons and synthetic resins. Activated carbon is also an effective adsorbent for organic materials, but not as effective to adsorb inorganic ions [6].A chemical modification of activated carbon surface with the iron functional groups was found the adsorption ability of vanadium(V) and was able to remove about 99.70% in 3 h [7]. The Langmuir isotherm satisfactorily described the equilibrium adsorption of vanadium giving a maximum capacity of 313 mg g”1 [8]. The kinetic data suggested that chemical adsorption was the controlling step for removal process, rather than the mass transfer. The experimental data of the column adsorption process were fitted by two different models whereas Thomas model well described the breakthrough curves. Sharififard and Solimani [9] compared commercial activated carbon (CAC) with synthetic ferric oxide”hydroxide”activated carbon (Fe”AC) for vanadium ion adsorption. The adsorption efficiency was affected by pH of the solution, and the maximum vanadium ion adsorption was found at a pH of 4.7 and 4 for CAC and Fe”AC, respectively. The Freundlich model was the best model to describe equilibrium adsorption of V(V) with these adsorbents. The Fe”AC nanocomposite had a higher capacity for vanadium ion adsorption (119.01 mg g”1) than CAC (37.87 mg g”1). In another study [10], fixed”bed experiments were performed and indicated that low flow rate, high adsorbent mass and small adsorbent particle size caused the performance of CAC to improve. In CAC and Fe”AC fixed bed systems, the breakthrough times for V(V) adsorption were 375 min and 1202 min and the total vanadium adsorption were 144.18 mg and 356.52 mg, respectively. Namasivayam and Sangeetha [11] investigated the adsorption of vanadium(V) from aqueous solution onto ZnCl2 activated carbon developed from coconut coir pith. The adsorption system was found to follow second order and Bangham’s kinetic models while the equilibrium adsorption data followed all the four isotherms; Langmuir, Freundlich, D”R and Temkin. The pH effect and desorption studies showed that ion exchange mechanism might be involved in the adsorption process. Ker¤nen et al. [12] found that AC can remove more than 95% of nickel from ammoniacal industrial wastewater at pH 5.5″9.0 but the vanadium uptake remained poor. So, a combination of AC and anion exchange is necessary to offer a feasible solution to the problem.The work in present paper is dealt with preparing activated carbon from naturally occurring material, making a necessary characterization procedures using available instruments and comparing its adsorption ability for vanadium(V) with that of commercial activated carbon. Also, various adsorption parameters such as pH, time, initial concentration and temperature was investigated, analyzed and discussed in order to achieve the optimum condition for removal and recovery of vanadium. 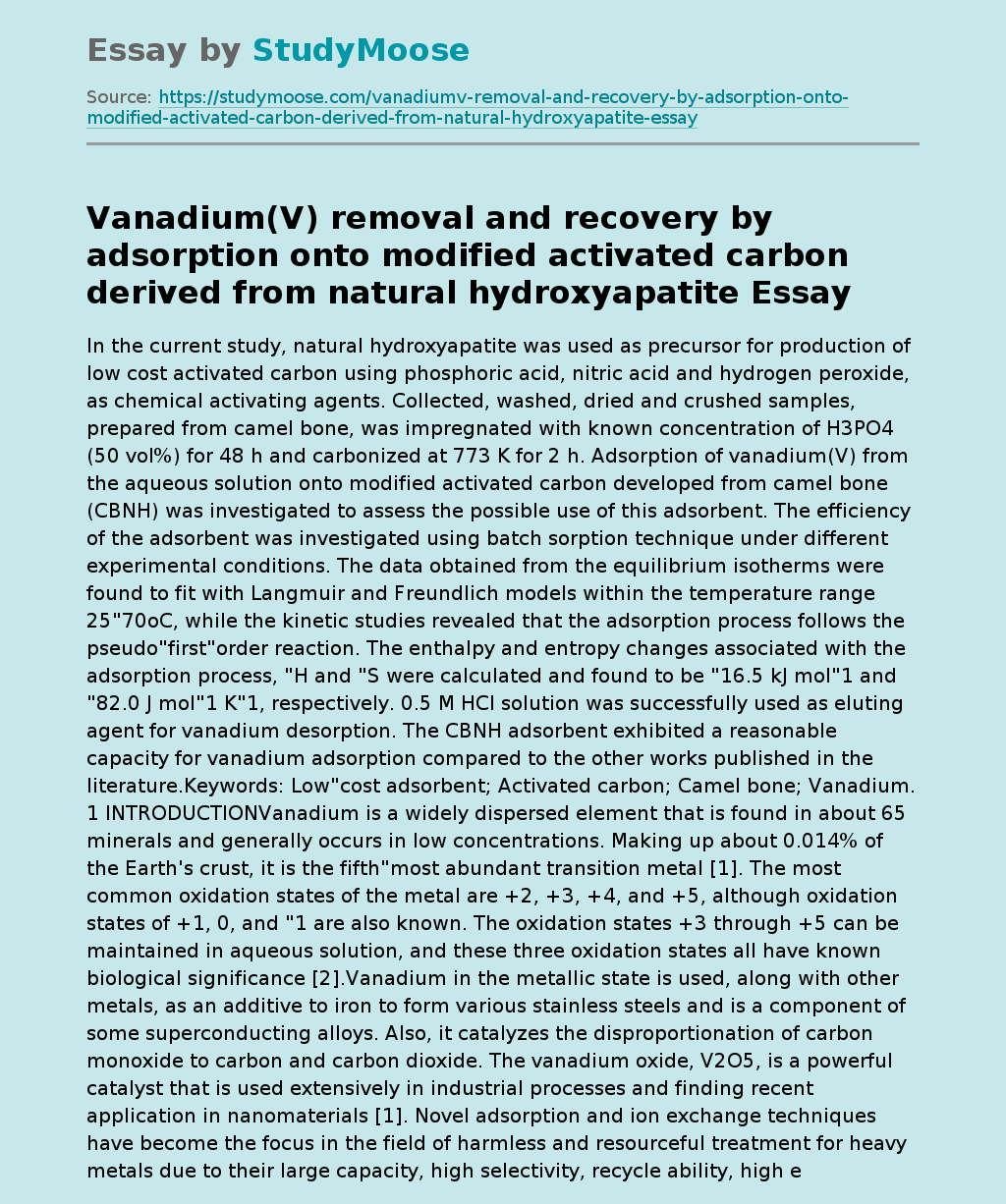