Music has become one of the most effective and influential tools in various cultures all over the world. For several years, it has evolved into different kinds of genre such as opera music, hip hop, rap, R&B, grunge rock, metal rock, death rock, emo rock, alternative music and techno music. Aside from these types of music, there is this style that is quite enthralling compared to those of its varieties. Some thinks that it is a movement for rebellion; others perceive it as a form of free thinking.

Don't use plagiarized sources. Get your custom essay on
“ Understanding the Punk Rock Culture ”
Get custom paper
NEW! smart matching with writer

Anyhow, it just seem to be misunderstood. These opinions refer to Punk Rock and its culture.

In order to further discuss the fascinating facts about it, the history of Punk Music should be known first. The initial form of punk rock, named protopunk in retrospect, began as a garage rock revival in the northeastern United States of America in the late 1960s. In this year, Punk Rock is said to be seen as the primitive guitar-based rock and roll of bands in the United States.

Punk rock, by contrast, accentuated simplicity of musical organization, moving with a principle called “Do it yourself” (DIY). This stated that any person could establish a punk rock band. With its distinguishing fast beats and hard-edged music, Punk Rock has proliferated into other cities and countries such as the United Kingdom and London.

It has also evolved into different types such as hardcore punk, street punk, skate punk and the likes. From the time of the beginning of Punk Rock, several major label record companies have thought of trying profit from underground punk culture.

The only hindrance was that these companies felt that promoting such underground music would not sell and would only give negative reputation to them. Most of the songs of Punk Rock are written to influence the public with political views, social awareness, reform, or just about the band’s own experiences. Their ideologies as Punk musicians are also used as themes of their compositions. It was a dystopian style of music which was originally similar to underground, minimalist rock and roll and later evolved into more diverse form of music.

Most punk rock songs are made short, uncomplicated and is arranged using moderately few chords compared to other varieties of music. It is usually performed in small bands rather by solo musicians. Punk bands, in most of the time, consist of a singer who could also be one of the instrumentalists, one or two overdriven electric guitarists, an electric bass player and a drummer. The vocals typically includes shouted slogans, chants and choruses rather than charming, harmonic ones that most pop bands usually use to catch the audience’s attention. Punk also had ways to get the attention of the public.

Seeing through their method of using outrageous clothing, hairstyles, tattoos, jewelries and other body modification would tend to create misunderstandings or misjudgments about them. The early punk fashion included ripped clothes, razor blades, safety pins, tape, marker or paint. Some wore leather, vinyl and rubber clothing, tight jeans, plaid trousers, skirts, t-shirts and leather jacket. Their hairstyle could rather be a Mohawk-styled, spiked, skin-headed, or dyed. Other hardcore punks in the post-1980’s who were against this kind of fashion preferred wearing only plain white t-shirts and jeans.

These punks made an argument that punk should just be a classified in terms of music or ideology. Their fashion sense also depended on their way of thinking or perceiving matters. In a community of Punks, the number of male followers was said to be larger than the female followers. Compared to some alternative cultures, punk was closer to being gender equalist in terms of its philosophy. Ironically, almost all were white during those moments, even though they live by an anti-racism ideology. They were fond of organizing local music scenes to gather all punks coming from the different sides of earth.

Punks had their way of showing their aesthetical views. Punk art was usually minimalistic, iconoclastic, satirical and very underground. Themes varied from different political issues such as social injustice, economic inequality, etc. Their artworks were showcased in album covers, flyers and punk zines which were made in an underground press. Black and white artworks were the early types of produced punk art. Punks had their own way of dancing too. Pogo dancing and moshing were dance styles associated with punk subculture. There were also punk-themed films produced.

Music videos and skate videos were some of the common skate-themed films created. Some of the original footage of punk bands was used in documentaries. Punks also had their own viewpoints to consider. Punk-related ideologies were mostly about individualism, freedom and anti-establishment. Other common ideologies were concerned with anti-authoritarianism, DIY ethic, direct action, non-conformity, anti-racism, anti-capitalism, anti-sexism, anti-homophobia, environmentalism, animal rights, veganism, nihilism which was based on their “unconcern for the present” and their “disaffection from both middle and working class principles and the likes.

Punk nihilism was expressed in the use of more self-destructive substances like heroin or methamphetamine and by the principle regarding “mutilation of the body” that made use of razor blades. Punk had a lasting influence on all popular music, and a flourishing subculture can still be found almost anywhere in the United States. Different kinds of music were influenced by Punk Rock; Punk Rock was also influenced by other forms of music. Glam Rock had a huge influence in protopunk, early punk and glam punk.

Punk and heavy metal subcultures shared similarities. Metal scenes hand an influence on protopunk. Punk and Hip hop emerged at the same time in New York and shared similarities in their subcultures. In the punk and hardcore subcultures, members or the scene are often evaluated in terms of the genuineness of their dedication to the standards or philosophies of the scene, which may range from political beliefs, social issues, etc. There truly were things that are very unlikely in a Punk’s lifestyle. This was the reason why they are misunderstood.

In an instance, in a photography gallery opening during a fieldwork, there was a jazz guitarist who created a positive atmosphere for the listeners. The music was appropriate for the setting; it was used to enhance the art being shown. As people would stare into the photography, the reception of the pieces they were looking at would change with the songs. You could feel moods shift and receptions of pieces move with the change of a song. The music unintentionally helped guide people for how to feel. In the same way punk rock music fuels the fire of its subculture.

The speed of the music energized the young followers, and its lyrics preached a philosophy to deviate. The music sounded different and the people acted different, the bawdy lyrics were transferred into real life. Any music could have an effect to the listeners. Music is the only thing that is constant in life. Music sets the mood of the audiences and influences their different points of view. Those who share the same preferences are likely to have the same types of music or clothing. Compared to other types of genre, Punk Rock music is one of the most enthralling and extreme kind.

With Punk Culture’s out of this world principles, lifestyle and preferences, other people would find it unfavorable and bizarre. People who do not appreciate punk music seem to have an impression that punks are very pessimistic about reality. They seem to oppose almost all social issues and exaggerate all matters in life. From the population of individuals all over the world, the followers of Punk Culture and Punk Rock Music only hold few of it. That is why they seem quite extraordinary compared to other individuals.

Punks would always be misunderstood and misinterpreted by people especially those who are not aware of the history of Punk Culture. They are more inclined to have the same opinion with the thoughts of individualism and an anti-establishment mindset. Punks are seemed to be the non-conformists of the world. They are the ones who are not frightened of striking out in audacious new directions. They show how brave they are to people by fighting for their own ideologies and by not worrying what others would think of regarding their physical appearance, social status, inclinations and extreme principles.

They may appear as though they are overstating things and that they are quite close-minded, but that is how they wanted to be perceived. Even though Punks contain bizarre practices, they still are people who could change depending on the circumstances and environment. Music is just one of the many things that could change the perceptions of individuals. It just so happened that Punks could relate to the principles of Punk Rock Music and Culture. 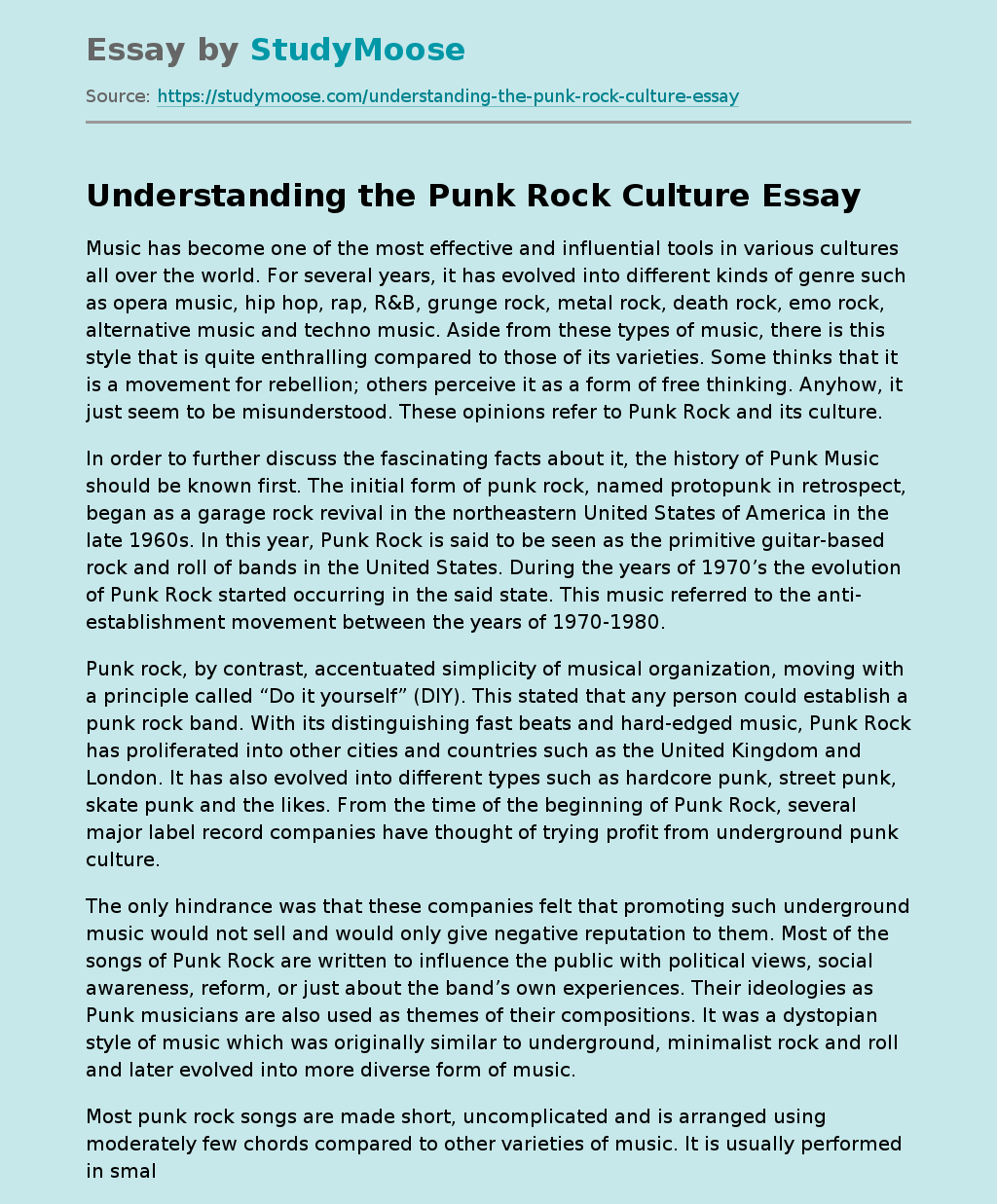