Globalization can be defined as a process whereby goods, services, labor and capital are moved around the globe (Friedman, 2000). This movement in most cases than not is a harmonized one with interconnectedness that is institutionalized. There is usually a set of relations that are global in nature that are established to ensure that the resources found in the world though in short supply, are used efficiently. The movement is acknowledged to the rise in economic integration globally that has in turn increased investments and trade.

Don't use plagiarized sources. Get your custom essay on
“ Understanding the Global Environment ”
Get custom paper
NEW! smart matching with writer

The world due to globalization is turning into a global village in that it is headed towards living in a world without borders. In a nutshell, globalization is a transformational process whereby the local phenomenons are transformed into global ones. The people in the universe are undergoing the process of being united into a single societal unit that functions as one (Ulrich, 2000). The globalization process entails bringing together of sociocultural, economic, technological and political forces.

The economic aspect is more vivid in that a national economy is incorporated into international economies as a result of imports and exports trade, foreign investments, cash aids and technology spread.

Though there has been sharing and exchange of goods, knowledge and even services among people and countries since time immemorial, the technological development and reduction of barriers has quickened the whole process. The state is thus put in a state where it is accountable not only to its people but to the whole globe.

States are somewhat powerless in the in light of these global relations to an extent that they may be unable to control their personal economies at least in terms of autonomous economic policy implementation.

The interconnectedness brought about by globalization has reduced time and space overcoming barriers to social organization and economic growth hence allowing them to be worldwide in its operations. Therefore globalization is linked to the vast spread of new technologies (Giddens, 2000). Globalization affects each and every individual.

This led to limited trade and the industries were very rare and stagnating. The high cost in transport contributed largely in the stagnating of industries having them scattered in the north and southern parts. Therefore it was very hard for entrepreneurs to interact hence impairing innovations and any progress in technology. The world was more like retarded in its growth. The second wave came with diminished transport costs. This led to high investment rate that led to the growth of the world market as a whole.

Specialization was adopted that promoted and stretched trade (Sassen, 1999). The two waves can be said to be basically different but ostensibly similar. The first wave was marked by long term flow as compared to the second wave that was characterized by short term flow of capital. Advancement in technology in the second wave is what aided in the short term fall of capital that also included very high pace of exchange of information. Therefore, in the second wave of globalization, exchange of ideas was much more important than any other form of trade as compared to the first wave.

The kind of trade that existed during the first wave was that of intra-industry foreign direct investment that was among nations that had similarities and focused on services, industrializing and outsourcing. The second wave’s nature of trade involved much larger intra-trade between similar states focusing on differentiation of products and economies as compared to first wave’s inter-industry trade. Second, the initial conditions are very dissimilar and this matters greatly.

There is great income difference in the countries involved that is seen now which is the second phase as compared to the previous. This has great impact on policy making and the surrounding environment more especially in the third world. Furthermore, the 19th century trade and de-industrialization disillusioned countries such as India and made it very hard for them to embrace the laissez-faire trade and policies investments. On a more positive note though, the gap between the rich and the poor slightly narrowed on the second phase of globalization due rapid technology transfer (Friedman, 2000).

Though there can be skepticism about the world becoming smaller in the sense that it is termed as a global village, globalization has brought a new wake of change evidenced world wide. The time has reduced in the aspect of conveyance of information, transport systems have improved thanks to technological boost and services like medical can be termed as international thought most of them are financially bound. The fact that the world is interconnected, many parts of the world still remain left out in the globalization network.

These countries include much of the sub-Saharan Africa therefore presenting thus making globalization not so much global. Global implies that it is supposed to include every part of the universe and the way it is at the moment, the inclusion is uneven. According to history, capitalism is more of the driving force of globalization. With that aspect in mind, globalization has had ambitions to the world wide level with respect to resources and market. To some extent, globalization is just an extension of capitalism in an advanced stage not something utterly new. It has been done before with Aquarius and after that with postmodernism.

Globalization should therefore not be looked at as a new phase in world history because it has not taken the whole world but just a part of it. The globalization process did not start the other day, it has been an on going process for centuries now all though currently much more experiences of the same are felt. Benefits of globalization 1) Economic growth in countries The countries that participate well with the world economies have had their economies grow much faster and consistently as compared to those countries that have detached themselves closing their borders to globalization forces.

This is due to the fact that a wide product range is made accessible to people by the availability of cheaper imports and through competition, efficiency and quality production is guaranteed. 3) High life expectancy level Growth of wealth as a result of economic improvement that comes with globalization has led to access to not only good health care but also treated water. This has increased people’s life expectancy in that people are no longer dying from curable diseases; they have access to the medical services they require. Research shows that 85% and more people are expected to live for at least 60 years.

This is twice as much years as it was expected 100 years back. 4) Globalization has led to the reduction of investment barriers. As a result foreign investments have increased in many countries boosting economies and creating jobs for the citizens in that country. According to research, these foreign investments by 2003 totaled to US$575 billion as compared to US$23 billion in 1975. 5) The world has become a global village thanks to globalization therefore leading to improvement and accountability as far as the environment is concerned.

This is a positive impact to the environment encouraging people to conserve the environment by use of less polluting agents of technology. There is also the use of renewable energy resources in place of limited natural resources and promoting their imports and exports (Sassen, 1999). 6) Solving of international conflicts Globalization has brought with it increased interdependence among countries leading to the formation of institutions such as world trade organization and World Bank that aid in the settlement of inter government squabbles.

This has enabled international tensions on political and economic issues to be resolved having set rules that are internationally agreed upon and using those rules as the resolution approach. This has booted peace in many countries because not many countries would want to get into conflicts with their trading partners. 7) Respect of cultural diversity Migration from country to another is as a result of globalization. People are free to travel to other states and this has led to awareness and appreciation of the diversity that is there in the cultures of the world.

This has improved the democratic aspects of life and every person regardless of culture has his or her rights respected. 8) Globalization has led to improvement of technology in the global sense. This has in turn reduced the cost in communication, business and even education. Disease eradication has also been made easier because the world comes together in the wake of a new ailment to find its cure. Technology and improvement of modern communication has also eased the flow of information around the world. The whole world is put on the know if anything happens anywhere in the globe (Giddens, 2000). 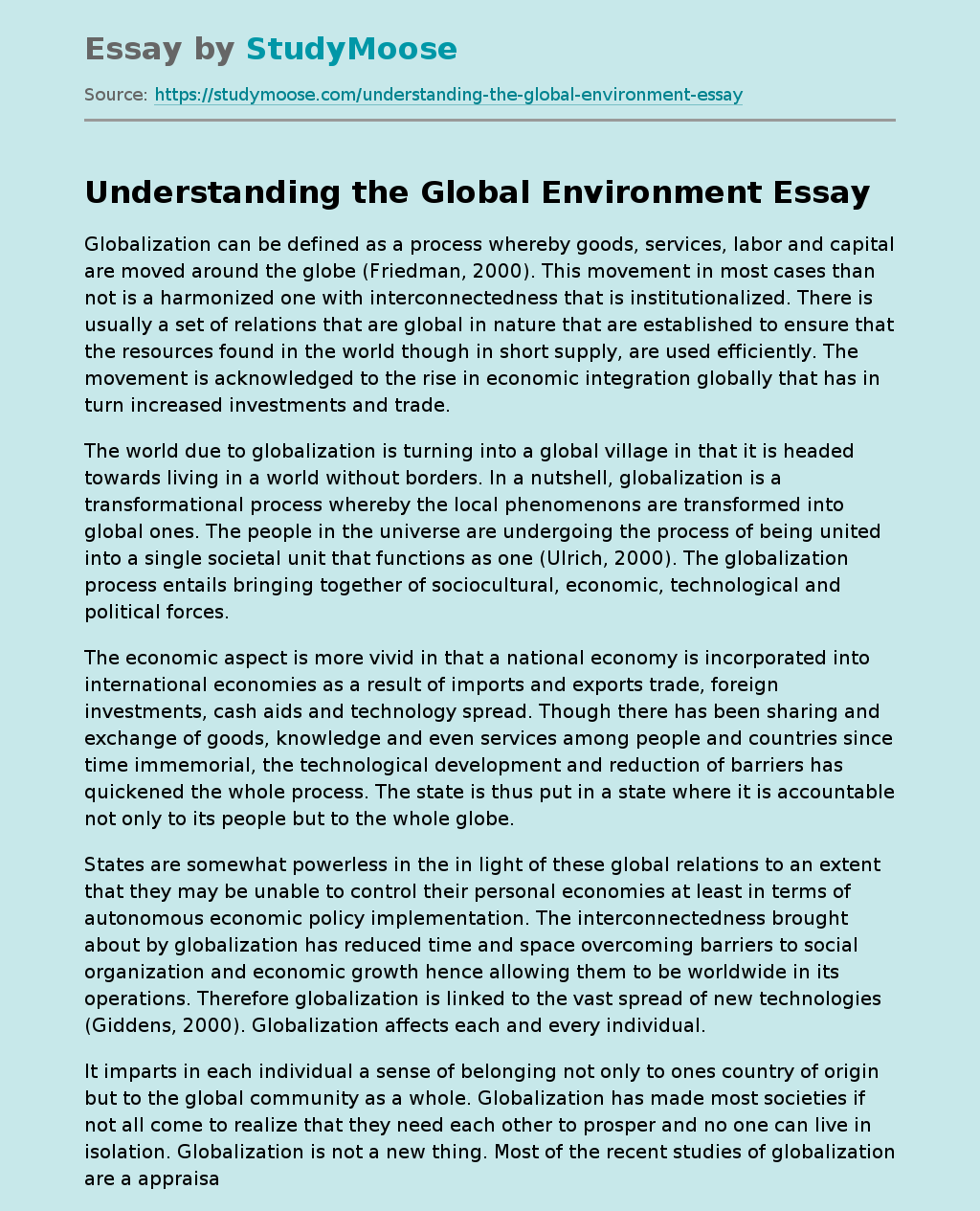