Unbroken by Laura Hillenbrand is by far the most interesting book that I have read in my young life. I was enthralled by the story and it forced me to think about my own life. The clear message of the book is to never give up and don’t let anger or bitterness get in the way of a great life. For without the raw evil of Watanabe Louis’ post war life couldn’t be so powerful and redeeming. There are so many great plot lines in this book: the rise of Zamperini as an Olympic athlete, his heroism towards his colleagues while on a raft for 27 days, his courage in the camps despite the torture, but his greatness really showed when he was able to transcend his pain and its incumbent bitterness to turn his own life around.

Don't use plagiarized sources. Get your custom essay on
“ “Unbroken” by Laura Hillenbrand ”
Get custom paper
NEW! smart matching with writer

This was the most gripping part of the book for me because most people would have acted very differently than Louie if put into the same situation as him.

His survival and eventual happy life was a testament to not only his will but to his ability to see into himself and make changes. While there were many significant and meaningful parts to the book, the most compelling parts of the book were Louis Zamperini’s life postwar and what he had to do to save himself, and the relationship with Matsuhuro Watanabe, also known as the Bird.

Many people who are faced with setbacks or physical and mental traumas never fully recover.

This is why Mr. Zamperini’s post war life was so significant. After being pummeled and starved at the hands of the Bird and other Japanese guards it was understandable that Louie came home angry, bitter, filled with regret and fueled with vengeance. This is the classic experience of soldiers that have come home from war traumatized by their actual experiences, and are now haunted by their violent memories and have some survivor guilt.

Zamperini started off miserable and incapable of making a successful transition back into stateside civilian life. His drinking and then the verbal abuse of his wife almost led to their divorce. He was violent, angry, and an unforgiving man who had constant nightmares of the Bird torturing him. Yet because of his nature and his core values he was able to rise above these feelings and seek a peaceful and happy life. His trigger to change came in the form of a sermon from the Reverend Billy Graham.

Billy Graham helped to pull Louis Zamperini out of the darkness. Louis remembered the promise he made to himself on the raft that if he survived he prayed that he would dedicate his life to God. He threw away his cigarettes and stopped the booze. By accepting the power of Jesus Christ he was overwhelmed with a need for forgiveness. He was now capable of being at peace and his nightmares stopped. This part of the story is so significant to me because it is the essence of what Unbroken is about. Despite all of the odds, the combination of his Olympic and military training, good character, sheer will and discipline, Zamperini was able to the survive the horrific torture and then adapt into a position of forgiveness that made him a more tranquil and serene person.

It is astonishing that he was able to forgive the Bird, the most vile of human beings. The Bird was an educated man from a well to do family, but he had a mean streak and was very much a sadist, a person that hates other people so much that they can inflict cruel and inhuman types of torture on them. The Bird not only tortured Louis, but he split his time between two camps and he was universally hated by all of the prisoners. So strong was the hatred that the prisoners tried to poison him by putting their bacteria laden waste into his food. The Bird is the character I believed was the most horrible and interesting, as he is the anti-hero to our hero Louie.

Wantanabe took a perverse almost sexual pleasure in torturing others. He pounded on the American prisoners and some broke, but not Zamperini. Louie never made an anti-American statement and he never gave up and classified information that could have put his fellow troops into harm’s way.

Right after the war, the Bird was deemed a war criminal for his disgusting acts and he slipped into hiding. He eventually became a very successful businessman and had a family. He was able to use his family connections in Japan to avoid prosecution.

This is a huge plot twist in the story as the sociopathic, homicidal sadistical lunatic becoming a family man is hard to believe, but it happened. Still, when Zamperini went to Japan to forgive many of his captors, including Wantanabe, the Bird refused to see him. His despicable nature obviously re-surfaced and it was likely his guilt and self disgust that prevented him from seeing Louie. This gripped me as I found it amazing that Louie was willing to forgive and yet his torturer was too cowardly to see him. Wantanabe was a very important figure in this story. By crushing Louis’ spirit and literally spitting on him, Louis got to see the strength of his own character.

Wantanabe effectively made Zamperini a better, more spiritual, and more grateful person. No one should ever have to go through this kind of torture and it would be easy to hate Wantanabe forever. Yet that wouldn’t have made Louis the hero he is known to be today. He became a true Christian, secure in his faith and willing to forgive and let God do the judging. Wantanbe frankly is very important here, for without his evil we couldn’t see the extent of Louie’s goodness. I wish Mr. Zamperini and these American troops didn’t have to go through this torture but I learned a lot from how Mr. Zamperini handled this ordeal.

Unbroken was an amazingly powerful story. Literally a story of good and evil. I love how Zamperini turns his life around and also how despite his success and the fact he escaped justice, Wantanabe could never really be at peace with the wrath he brought to these soldiers. It is a story that I will often think about when I am challenged. The book’s core messages: persevere when faced with long odds and never ever give up. Of course it is also about never letting bad people ruin your own spirit and life. While hard to do, forgiveness is the best path. It is through for forgiveness that we do the least harm to ourselves. These core messages and values I will take with me throughout my life. 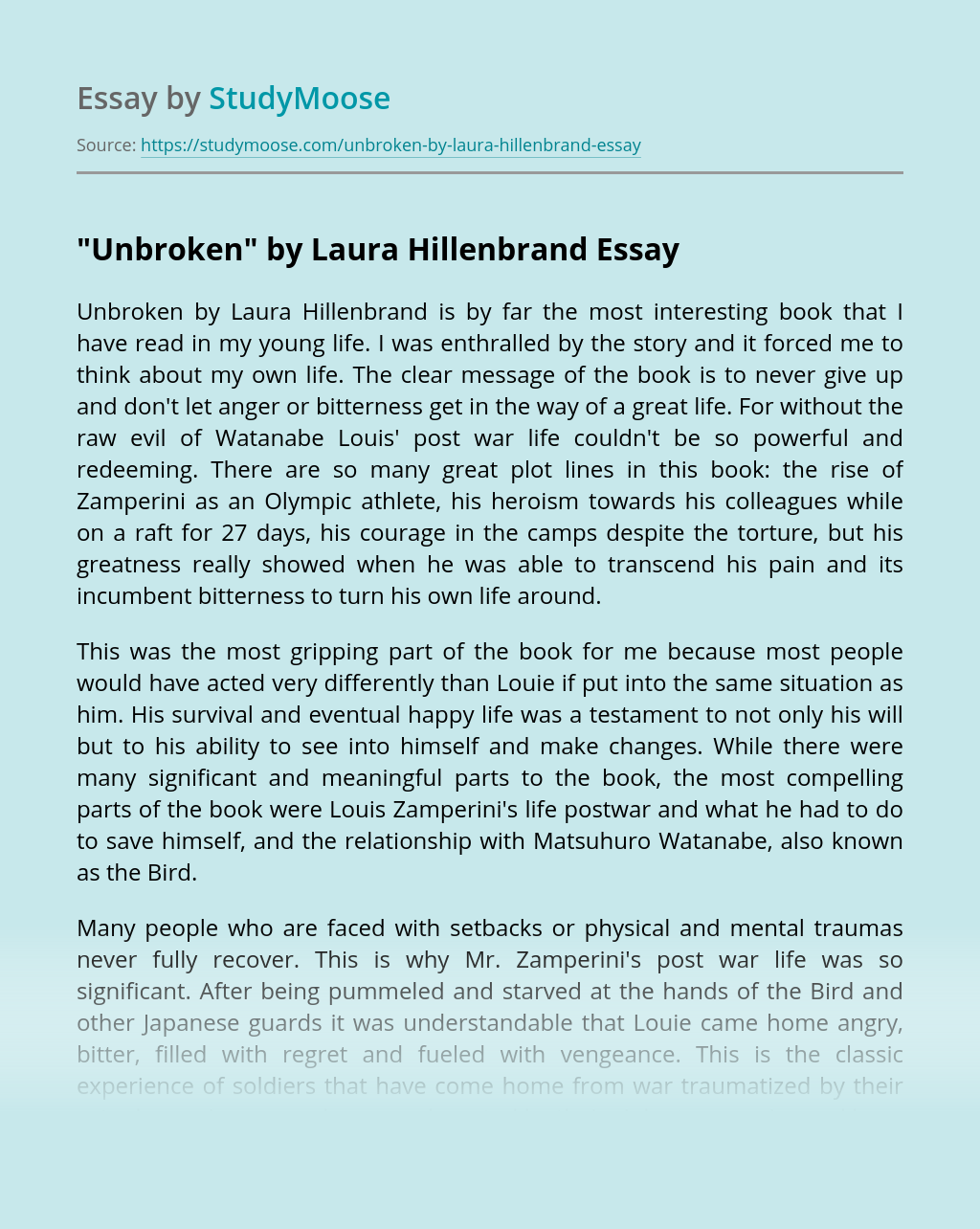