Trespass to persons means that there is an intentional act that interfere the plaintiff’s person or his body. Trespass simply means no more than “wrong” and trespass cases will usually deal in the local courts.

By 1250 the royal writ of trespass had acquired two formal requirement which are the defendant acted vi et armis (with force and arms) and contra pacem (against the King’s peace).

Vi et armis means that the claimant can claimed that he or she suffer injuries by the defendant’s act which is with force and arms. For the second requirement, the royal court will only decides on the case that the force was against the King’s peace. Trespass to person are actionable without prove of damage which is actionable per se. This mean that the plaintiff does not need to prove the damage or injury suffered in order to make a claim.

Therefore civil rights and person’s dignity is protected. However, there are three types of trespass to person, which are assault, battery and false imprisonment. These types of trespasses can be established if the elements of the trespass are fulfilled.

“Assault is an act of the defendant which cause the claimant reasonable apprehension of the infliction of a battery on him by the defendant”. Assault will not cause the plaintiff suffered damage but will lead the plaintiff to apprehend the application of force. For example if I point a gun at you, I have committed an assault this is because you are made to think that you are in imminent danger of being attacked. In another situation if the gun is unloaded, I will also commit an assault – “you do not know that, and I have every reason to apprehend battery”.

In order for the claimant to claim for assault, he or she must prove that the defendant had the intention. This is the basic requirement of the tort and here signifies that the defendant intended the claimant to apprehend reasonable force would be used or was reckless as the consequences of his or her actions. Words alone can amount to an assault. “There is old authority that words by themselves cannot amount to an assault”. However, this statement is overruled by R v Constanza which the court held that words alone and threat made by a stalker would amount to a criminal assault if there consist of intention. Besides, ‘A threatening act which would amount to an assault can be preventing by the words which are spoken at the same time’. In Turberville v Savage, the defendant put his hand on his sword and said ‘If it were not assize-time, I would not take such language from you.’ The court held that the defendant’s statement did not reflect immediate apprehension to the claimant.

Defendant did not have the intention to commit an immediate battery therefore the claimant cannot claim that there was an assault. Furthermore, silence phone calls also amount to assault. Such as in the case of R v Ireland , the defendant made silence malicious phone calls to three difference women, he was convicted under s.47 Offences Against the Person Act 1861. He tried to appeal but his appeal his dismissed. The House of Lord held that silence would amount to an assault and psychiatric injury can amount to bodily harm. Although the claimant suffered no damage but the claimant reasonably believed that oral threat would be carried out in future.

Capability to Carry Out the Threat

Can the defendant inflict immediate and direct harm on the claimant? The test is objective: would a reasonable man, who is in the plaintiff’s position, feel reasonable fear that there is a threat of immediate force upon himself? This can be explain in the case of Thomas v National Union of Miners (South Wales Area), the court held that it is impossible for the striking miners to threat the other miners who were transported by the bus and observed by a line of police. Therefore the defendant did not constituted an assault.

“Battery may be defined as the intentional and direct application of force to another person without that person’s consent. This touching need not necessarily involve violence”. “Same as assault, battery is actionable per se, the claimant does not need to show that they were caused any injury or damage. Unwanted contact or touching is enough.” If one person were acting intentionally to cause apprehension of contact to another person would be considered as battery.

For example in the case of Fagan v Metropolitan Police Commissioner, the court held that the defendant was negligently drove on to the policeman’s foot, but he was liable for battery when he refused to move the car until the policeman shouted get off his foot several time. Can intention be transferred? Yes, there is doctrine of transferred malice. This applied when then intention of the defendant was to hit A but misses and hits B. In the case of Livingstone v Ministry of Defence , a soldier in Northern Ireland fired a baton round targeting a rioter.

He missed and hit the claimant instead. The court held that the intention of the soldier had been transferred to the claimant. In Malaysia law, it stated that if the act of torture were committed in a group, intention would be evident. For example in the case of Abd Malek bin Hussin v Borhan bin Hj daud & ors, all the police officers that had carried out the political detention of the claimant were considered having the intention together.

In order to claim for battery, the defendant must have directly and voluntarily applied force contacted the plaintiff’s body. The force applied by the defendant must be directly. This will be clear by giving example such as if A pushes B into a hole, that is battery but if A digs a hole and B falls into it, this is not a battery. Besides the defendant must act voluntarily. In Gibbons v Pepper, the defendant was riding a horse and someone hit its back. The horse bolted and collided the plaintiff. The defendant was not liable because he did not carry out the act voluntarily. However, the contact must be hostility. This is supported in Lord Goff’s view in Re F, “… Any touching of the body without lawful excuse, capable of amounting to a battery and a trespass …” In Wilson v Pringle, Court of Appeal held that because the act of the young defendant is hostility therefore it will amount to battery.

Touching someone without his or she consent will be considered as battery. However, there are also some exceptions such as tapping a person’s shoulder in order to get attention. In Nash v Sheen, the plaintiff suffered skin allergic due to the defendant use the tone rinse on her hair without her consent. This was held to be a battery. In Malaysia case Tiong Pik Hiong v Wong Siew Gieu, the claimant was hit and her face was scratched by the defendant because of the suspicious relationship of the claimant and the defendant’s husband. Therefore she was liable for battery.

Restraint must be in total

Knowledge of detention by claimant

There will not be a false imprisonment if someone is prevent from leaving the premises because he will not fulfill a reasonable condition subject to which he entered them. In Robinson v Balmain Ferry Co Ltd, the plaintiff claimed that the refusal to release him from the defendant’s wharf unless he pay 1 penny for the exit fee is considered as false imprisonment. But the court held that the charge was reasonable and stated as a condition at the notice board.

Is intention necessary to establish all these type of trespass? For all the intentional torts, there are two types of intention. “First one is that the person know that the consequences of his acts and wishes for those consequences to befall the plaintiff… Secondly, a man whose conduct if foreseeable to give rise to some infringement of the plaintiff interest is said to have the intention to commit the act in question.” The importance of the intention will be based on jurisdiction. In some cases where there is no intention of the defendant then negligence will be able to sustain for trespass to person. Therefore nowadays, intention in trespass is not so important especially when the liability of the defendant is determined by the objective test. However, this seems to be complex and difficult to distinguish, when can negligence be amount to trespass to person? One example of the case of Sayer v Harlow Urban District Council, the plaintiff accidentally locked in the public cubicle because of the handle is missing, the court held that there is no false imprisonment.

In contrasting case of R v Governor of Brockhill Prison, although there is negligence made by the defendant but the court still held that there is false imprisonment. In conclusion, intention will be necessary to establish the tort of trespass but to some extent such as when negligence is established. However, the intention of the defendant will still be the first thing to consider in the torts of trespass. This is because without proving of intention then floodgates will definitely happen. It will be more complex compare to using other aspects such as direct application or force. Therefore, it will be the best if the court tries to examine with all the elements in order to find out the real causes of the case. This will achieve the real objective of law, which is to provide fairness and justice.

Trespass to Person. (2016, May 19). Retrieved from http://studymoose.com/trespass-to-person-essay 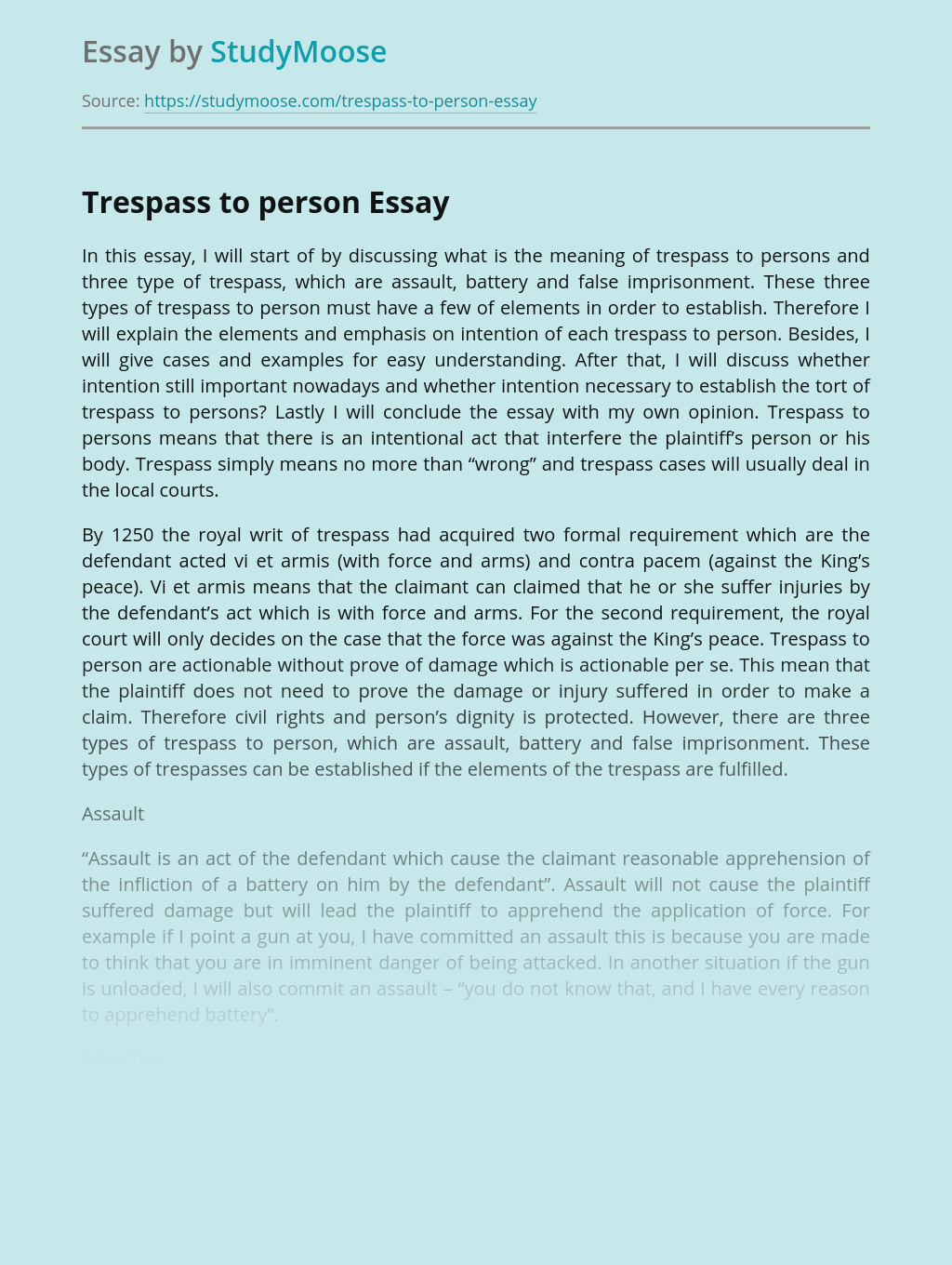