Traditional Gender Roles in The Colour Purple by Alice Walker

This visual diary created was inspired by many aspects of The Colour Purple. The purpose was to pose questions that allowed individuals to reflect and change so that we can continue to mature as humanity. The issues presented in the novel are obviously still very relevant to today’s society so a more contemporary style was adopted for the exploration of these themes.

Celie’s journey through oppression allowed Alice Walker to explore the theme of self-discovery. Celie should have been too broken to do anything with her life but was able to stand up for herself with the help of the strong women around her.

Don't use plagiarized sources. Get your custom essay on
“ Traditional Gender Roles in The Colour Purple by Alice Walker ”
Get custom paper
NEW! smart matching with writer

When Albert interrogates her about her choice about moving up north with Shug, she tells him, “You a lowdown dog is what’s wrong, … It’s time to leave you and enter into the Creation.” (p.g. 202) She has really been able to create a better life after gaining confidence and independence, proving those who looked down on her wrong and making a social stand against stereotypes.

The self-discovery of Celie was an important point in her character arc where she finally realises her potential and unnecessary reliance on the male dominions in her life. Without this development of character, Walker would have been unable to highlight the importance of freedom from the oppression of minorities.

While the symbol of pants is to show the journey of self-discovery and freedom from oppression, it is also a symbol of opposing gender standards. The pants that Celie was making were for women, and she makes a point to say that “anybody can wear them” (p.

g. 276). When Albert and Celie’s relationship has become more genuine, Albert admits to wanting to sew but never doing it in fear of discrimination. The males are also oppressed because they feel like they have to avoid and even demean feminine traits and activities to fit in. Walker is showing that conventional gender standards are harmful to everyone when taken to the extreme and that we should move towards creating safer environments for everyone to develop equally and in their own style.

Walker explores the topic of gender, stereotypical roles, and sexuality throughout the novel and shows how close-mindedly keeping traditional views can be harmful. Some characters tried to break the boundaries of gender roles but this disruption of society’s long-established stereotypes caused them many problems. Being very sexually confident and bold in nature, Shug is branded a tramp. Sofia will not take anyone looking down on her lightly and says “hell no” (p.g. 87) to any acts of repression, resulting in a backlash. Harpo feels insecure about his masculinity and was pressured to follow his father’s actions, so he tries to beat Sofia in order to “make her mind.” (p.g. 36) The Author has blurred the lines so much that even the characters cannot distinguish between the different roles;

All of these show that traditional gender roles can be very restricting with many consequences. They should be full of fluidity to allow expression of self to be explored to its fullest. The ways in which we conventionally understand gender roles are, in reality, not that simple and Walker overturns these ideas by creating strong characters who defy these roles.

A visual diary of a 21st-century designer was created to allow the themes to be applied to the modern world and to mirror Celie’s letter/diary writing and her being a pioneering designer. It was the best medium that was capable of imaginatively exploring the themes because the thought processes undertaken were easily portrayed as the character’s. It was also chosen for they are used to freely express artistic creativity which is related to the theme of freedom of expression. The character of Ember Oriaan was inspired by Celie and her development. However, Oriaan’s journey is only visible from when they had their breakthrough with their journey of self-discovery, while we see Celie’s full maturing process. Both believed that people should not be restricted to one particular style of clothing, and consequently began to design garments that could be worn by anyone.

A modern twist was put on these themes so that the issues explored could be seen from a contemporary light. The letter on page 3 is a similar self-discovery to Celie’s where they want to make a change after being oppressed. The title page was drawn with an irremovable calligraphy pen because the designer was certain that they wanted to start a new chapter of their life. Despite this, a lead pencil was used throughout the rest of the diary because there was still uncertainty in this new challenge they were taking on. By designing clothes that were functional in a variety of settings, they would both allow people the opportunity and freedom to express themselves. Both the skirts and the pants have represented many topics such as societal change, creating freedom from oppression and blurring the lines between gender, illustrating the fluidity of the symbolism in these garments. The mind map on page 4 not only shows the brainstorming process and inner conflict of the designer but also how complex the topic of gender can be.

Alice Walker’s use of character development, plot and dialogue in The Colour Purple helps to explore and examine the many themes at a deeper level. The oppression of minorities, the journey of self-discovery that can lead to freedom, and gender roles that reinforce stereotypes are issues that people will hopefully be more open to discussing.

It is evident that the people still feel face the same issues and feel the same emotions, even if they are set in two different centuries. Both are therefore deeply empathetic and have a desire to help people question themselves and grow into better individuals. 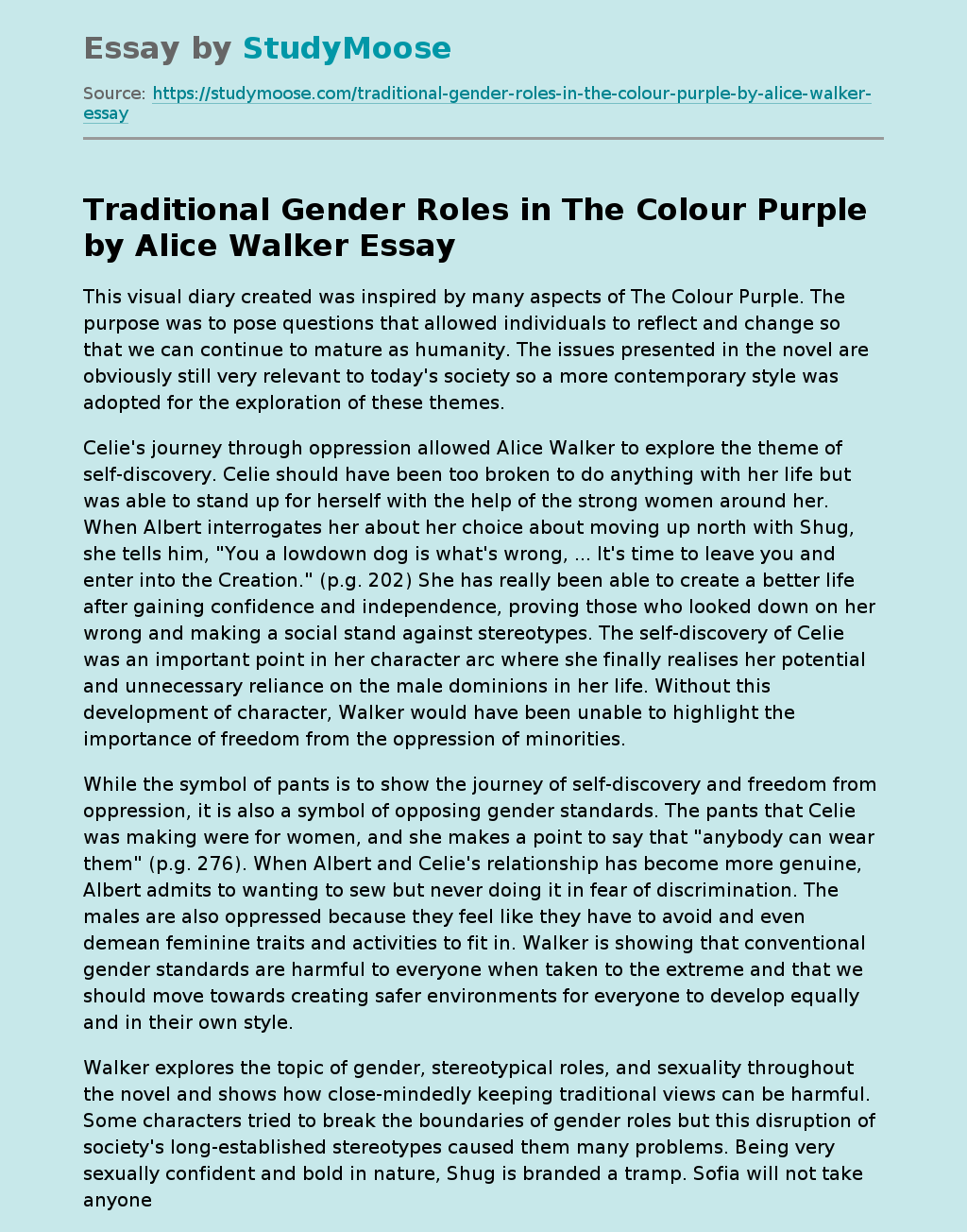